With this evidence and more we can only come to one conclusion: The Earth is being visited by ET craft. The UFO Orbs are definitely real UFOs as well.

A UFO Mothership caught on tape dropping Orbs during a lightning storm.

The Mothership UFO was caught on video by a member of the public as it hovered above down town sky scrapers with its white UFO orbs been dropped every now and again which I point out in the fantastic video. 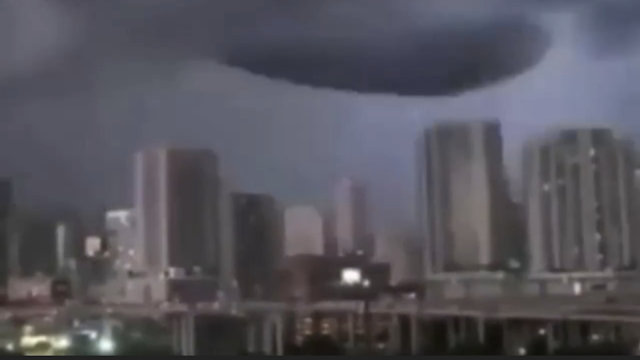 The Mothership and its UFOs Orb fleet were seen flying in the distance and just above the skyscrapers. My research has discovered that this was probably filmed over China? The UFO Orbs flew in a straight line, straight down until they stopped and hovered just over the surface. In this video we see multiple UFOs in just one marvelous UFO video, a UFO enthusiast filmed the UFO by the way by way of a webcam.

This is a very intriguing UFO video indeed, as there was definitely something strange about the UFO Mothership that would not allow us to disregard it at all, it was just way to big "it almost demands our attention" or is it a clever CGI hoax. I genuinely don't get a hoaxed kinda UFO feeling about this. The UFO demonstrated highly advanced aerial hovering skill's and it's movements stayed true even though it's roughly the size of a football pitch! For it's size, it hovered good especially since it managed to move in super slow motion for a brief moment, and probably evaded unseen aircraft. If aircraft's didn't come out to intercept this Mothership or the UFO Orbs then it's either never happened and it's a real bonafide CGI fakers hoax or it's not been challenged at all because it's got clearance to hover with extreme menace! It's so menacing looking don't you agree? What do you think this is?

When I first saw the video, I liked it. The Mothership UFO was seen sending out these white Orbs during the lightning storm. The UFO Orbs panned down in a straight line and lowered down towards the actual town below where the thunder and lightening was heard. The Orb UFOs then hovered over the ground before they zigzagged away from sight. I believe that this was filmed in China in 2018.

It was really lucky for us to capture some kind of alien activity as these football pitch sized UFOs can be quite rare these days. This is certainly a good example of why we should all keep filming the sky and waiting for the next time. I don't know whether this a real UFO sighting or not but if it happens again then we will definitely get some more footage of it so that it can be studied deeper and with further proof comes confirmation.

If you know anyone who would appreciate this please share it with them, thanks. Also leave your thoughts and opinions, cheers.