A family in the US actually filmed a large formation of UFOs two nights on the run. The 5 ufos were between two buildings. The gov knows for sure.

Okay, I've been away from writing about UFOs for a few weeks now but, im coming back to show you this amazing jaw dropping video of 5 blatantly obvious UFOs between two buildings.

How stupid and corrupt the power's that be, really are! They're all real, bonafide comedians. Here's a perfect working order example of what's going on within our atmosphere, right above our heads. There's plenty of UFOs. 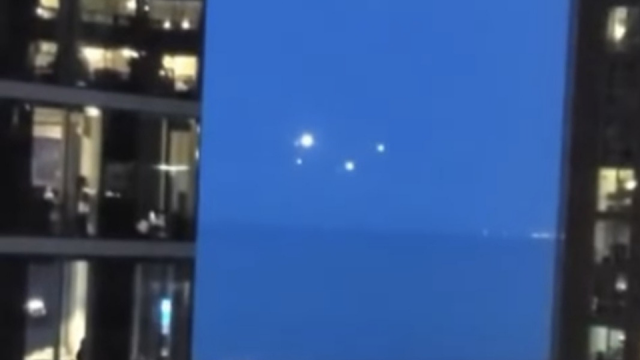 Credit: ufo_nr.1/UFO Sighting's Footage/Ufosfootage/Canva.
We all deserve to have the truth no matter how disturbing it is to know that there's Extraterrestrials "you know, beings that just wanna exist like we do"! It kinda sounds really bizarre doesn't it when we think of it in this way? How scary that a living lifeform just wants tolive, experience and learn about their surroundings. Only when they are a threat should the government maybe keep it from us... Hmmm! I wonder if this is why they're all keeping it from us?
Related Post
Huge Fleet of UFOs Filmed Over Austin In Texas
Im not vindictive and I'm not seeking to uncover the biggest hidden secret mankind has ever had but what what I would like is the blooming truth about UFOs, wouldn't you! Seeking to uncover such a huge, massive secret would involve massive amounts of resources like insiders, actual physical proof. In fact, lot's of people have claimed this but have never had the complete rundown like an actual Alien or a craft and put it on live tv. So, if the best conspiracy theorists can't do it, then I "probably" can't. But never say never, right.
A family in the US saw a formation of UFOs two nights on the run. They're all talking about it like this is just a usual thing like this is normal or something! The video is pretty wild, it's convincing and it's typical of the real world. A plane actually flies past and above the UFO formation and the difference between the two, is very hard to ignore.
The video speaks for itself...

UFOs are real, yes we've already seen the surveillance UFOs called UAPs and the other videos released by the US Navy ordered by the US Department of Defence DoD and ultimately this was all released by a brave administration. Call him a trail blazer, call him what you want but to  be honest, he was to much of an "individual". He had advisors, but he was his own advisor! He told us that UFOs exist, and people still ask if UFOs are real? I just don't get it.
Credit: ufo_nr.1/UFO Sighting's Footage/Ufosfootage/Canva.