An excellent eye witness filming this pyramid whilst on holiday caught a meteorite over the pyramid of Giza with a small UFO flying away from it.

There's really no disputing this amazing UFO sighting filmed over Egypts most famous landmark the Pyramids of Giza.

There's no information on the UFO itself but that doesn't take away from the UFO craft itself unless let's say, we did have the name of the eye witness filming this, it's like "then what"? There's not much we can do with this information anyway other than the history buffs will want it probably just to add it into their database of UFO sightings throughout the ages? 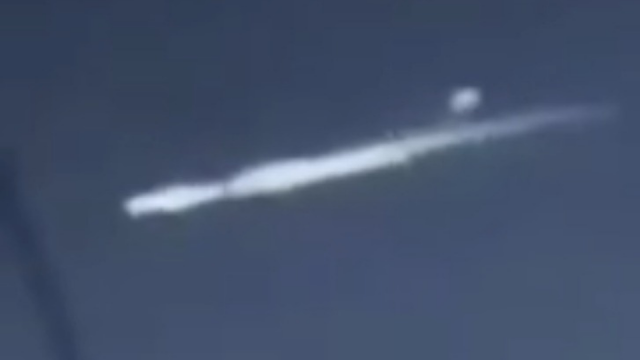 Credit: Daily Star/UFO Sightings Daily/UFO Sightings Footage/UFO News/Canva.
It's a huge part of the verification process for some people and for others like me, I believe that people have the right to anonymously reporting on UFOs because I've absolutely seen people been trolled, people have lost yheir blooming jobs and some have been abandoned by their employers and their own families so forgive me for being in favour of allowing people to totally avoid unnecessary stress that can and history has proven that it will destroy a percentage of people's lives.
Related post
Guy Films Black Triangle UFO Over Chicago And Fears For His Life
Of course it's gonna add extra workloads to researchers and it's gonna have a question mark above the authenticity of the UFO sighting in particular, but it definitely doesn't matter because UFO Sightings have question marks above them anyway so it's neither here nor there if you have a name next to a UFO sighting or not! Of course I'm in no way under any delusion that hoaxers and fakers will use this avenue of inaction to add a name to the UFOs caught on camera and they'll take advantage of the anonymously reporting of a UFO sighting just to further their evil tinkering and editing of other people's videos to add a stupid UFO to it, so that it then does the rounds online and people will sometimes believe it.
Here's a quick quote from Daily Star:

Scott Waring said that tourists caught the footage while on holiday in the area.
He bizarrely claimed the original object was not a meteor, saying: The UFO streaks across the sky like a meteor, but then part of it shoots out another white orb and that orb travels in the opposite direction. It looks to me like the people who built the pyramids were doing a flyby to check on it.

But, it's a necessary evil to let,  no sorry that's a wrong word. To allow people who've filmed a UFO to report it without the fear of repercussions is a good thing.

This UFO is sneaky, it's sneaked into Earth's atmosphere with a meteorite slamming into the world and it looks like it's literally hidden either right behind it or it's attached itself to the meteorite or the actual meteorite is a UFO itself and a piece broke away from it, but the bit left behind by the UFO is continuing it's course to it's eventual demise when it hits the surface of this planet?
I mean, I'm really only explaining my version if what I'm seeing, right? This is my honest interpretation of what I am seeing and I am convinced that I'm seeing a UFO either hidden behind the meteorite or it was attached to the meteorite while it came through our upper atmosphere and if anyone monitoring the meteorite impacts burning up in our atmosphere would just see a "regular looking meteorite burning up coming through our atmosphere" and that's very sneaky and definitely a possibility for example, of what  we're seeing here...
Related post
UFO Blows Apart A Meteorite Before It Hits This Planet In Epic Video Footage
I'm pretty sure, actually I'm certain that someone sees this very different but that's the best thing about writing this article and sharing it with like minded people, so that we can have a good and healthy team spirit research session! Just add your messages in the comments section below and ask your questions if you have them, also? Believe me, people leave a ton of messages every single day on my news articles. I'm constantly being educated and that's because I don't have all the answer's but I can admit that. I enjoy learning to much to allow my ego to get in the way. You guy's absolutely smash it everyday when you write amazing answers, you leave new questions with superb observations and what was once a basic (kinda badic) UFO sighting usually ends up becoming a huge UFO sighting which has been oroved to have been caught on camera elsewhere and sometimes we develop a time-line of where said UFO has been?
Omg these are the best UFO incidents that have and always will be the ones that will hopefully be used by relevant agencies, the relevant ones who need the information as part of a much, much larger picture to either prove UFOs have been here, but also that they've got proof that they was at such a place at such a time.
Here's the full YouTube video uploaded by myself to my own channel UFO News, please enjoy:
Please share your thought's and opinions also any ideas that you might have about this amazing UFO sighting filmed right over the great Pyramids of Giza.
Credit: Daily Star/UFO Sightings Daily/UFO Sightings Footage/UFO News/Canva.