There's not a shred of information with this YouTube Video but it exists and therefore writing about it is the right thing to do. It's a good UFO vid.

I know it's hard to believe that a UFO attacks a meteorite for whatever reason and maybe without the video evidence it'd be laughable, but I'll be, the video exists and it absolutely looks exactly like what the title say's it is.

So, because we've all got access to this publicly available video, we really need to check this out. It's a "literal" video, basically it is, exactly what it is. A UFO flies into the tail end of a very bright meteorite and destroys the meteorite, end of right. No, because then it flies off but all the while it's still speeding up whilst it's flying in front of the said meteorite. It's quite extraordinary to see, there's nothing quite like it anywhere. In fact I'd go as far as to say it's a one of a kind, and as such, science won't have a satisfactory understanding for this (for me anyway's) or a satisfactory answer come to think of it full stop. You know what science is like, anything outside of the fact is fictional. Lol 😆. 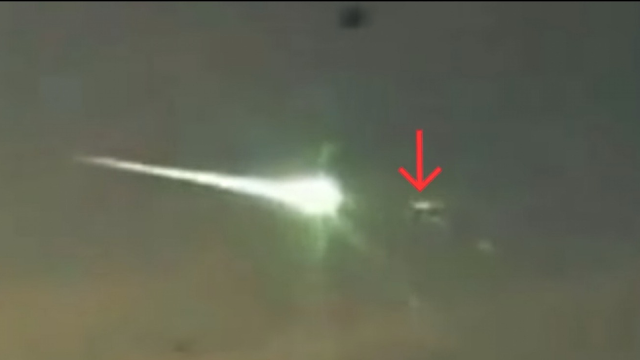 Credit: UFOvni2012 YouTube Video/UFO Sightings Footage/UFO News/Canva.
I'm being serious now, without the video it's grounds to be laughed at "like, really laughed at" but Holy cow, the video really does exist and what's more is that it plays out just the way the title say's it is. I don't know about saving mankind but it's almost certainly a UFO shattering a meteorite and it seems to be diffusing the meteorite and breaking it up just before it hits the surface of this planet.
Related post
US Navy Destroyers Comes Under Attack By UFOs | The Aftershock Hits Navy Ship
What do we say to this? How do we respond to something that almost seems impossible or that just mentioning it makes people laugh? It's neither here nor there if the video is showing a meteorite blowing apart before it hits the planet  what people will always focus on is how absurd it sounds. 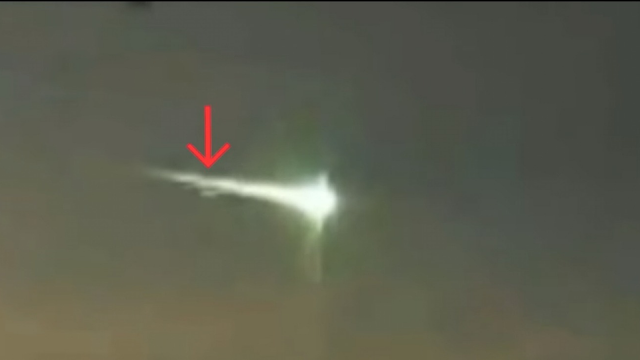 Credit: UFOvni2012 YouTube Video/UFO Sightings Footage/UFO News/Canva.
Although over 5K people on YouTube have liked the video so far, 1.5K people have thumbed it down for some reason? What do you think they see or why do you reckon they have given the video a thumbs down? It's probably because they can't understand it or they think someone has faked the video, or they know astrophysics, astronomy etc and they know something we don't?
Related post
Apollo Veteran Say's Alien's Came To Earth In Peace On A Mission To Stop Humanity Destroying Itself
I've never seen such a strange manoeuvre by a UFO ever, this happened before 2013 which is when this video was uploaded to YouTube. It apparently happened in Russia on the 15th February 2013. When whistle-blowers leak information to the public the information has to be accepted with good faith, in the context that it exists and needs to be seen by the public, this UFO encounter is on a same level because it exists, it needs to be seen by the public and therefore it should be seen by the public and allow them to make their own mind up on it. It follows the same process of whistle-blower related material and no doubt it will be denied by the Government affiliated stooges with ulterior motives and their careers on the line. But, if you speak to retired astronauts, retired generals, retired politicians, retired police and retired Pentagon, CIA, NASA etc the list is endless believe me. If you talk to the same people but the ones now retired, you'll get a very, very different story, a more edgy and unbelievable story and there's countless examples. It's just the way it is in this world.
Related post
This is The Largest UFO Super Cluster Filmed At One Location In New Mexico
We see this UFO actually flying into the tail of the meteorite and it really does speed up which is more than likely impossible under normal circumstances but with unusual circumstances we see it speed up and that's gotta be intelligently controlled outside or under intelligent control inside. But either way it shouldn't be speeding up going faster than the bulk of the meteorite, that just doesn't make any sense whatsoever so it's gotta be under control by someone or something? That's my understanding and probably most people who are watching this UFO in the tail end of the meteorite. It's common sense, right?
Here's the actual full video provided by
Please share your thought's and opinions also any ideas that you might have about this amazing UFO sighting showing a meteorite blowing apart by a UFO. I'd also appreciate it if you could share this post with someone who you think would appreciate it, cheers.
Credit: UFOvni2012 YouTube Video/UFO Sightings Footage/UFO News/Canva.