The ISS had a very sinister UFO encounter which saw 3 triangle shaped UFOs streak past the ISS and they were very fast. Was they going to Earth maybe.

NASA still insists on space been void of any Alien life or should I say, until NASA finds it on their own terms in a controlled manner.

Even though this is the International Space Station, it's definitely a NASA UFO video but I guess they want a "microbial Extraterrestrial entity" then they'll probably work on up to crustaceans under ice planet's and then after that it'll be dragonfly type insects. I honestly think that NASA knows about Extraterrestrial entities but want to build us up to it. 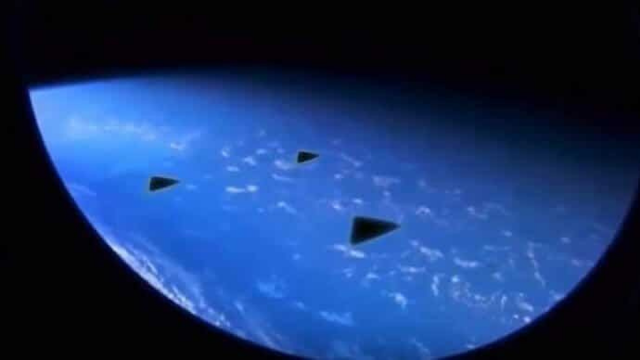 Credit: The Spiderman YouTube Video/UFO Sightings Footage/UFO News/Canva.
That's why it's taking time for Alien disclosure. We've had UFO disclosure, they built us up to it and still didn't call it UFO, but instead they called it UAP. The UFO disclosure was definitely built up to with a real time line of small titbits of info which all lead up to the 3 UFO videos released by the US Navy.
Related post
Astronaut Caught Red Handed With Harness on While on Live Feed From ISS | Blatant Fake Space Station
I think that stuff like these 3 triangular shape UFOs passing by the ISS is all part of NASA putting out this information but letting the public find it in their archives and on their very own ISS live feed TV. Why else would the cut off switch constantly allow a few seconds to record the UFOs near the ISS? They're fully and I mean totally 100 percent in control of the live stream delay.
Related post
NASA Astronaut Tells Ground Control It's a Ship | UFOs Uncloaked At The ISS
Just think about that one the next time there's a UFO sighting at the ISS. What we see unfolding on live TV at the ISS is been allowed by NASA - otherwise they'd set the delay to at least 30 seconds, right? And if we also go back in history, and if we apply an imaginary 30 second delay on the ISS Live feed, you can guarantee that we wouldn't have seen any of the UFO sighting's that have been filmed at the ISS.
There's a lot to be said about Alien visitors but these black triangular shape UFOs look very sinister. They most certainly do not give off that same feeling of "they're just watching humans". They really do look like a menacing, a sneaky, determined group of UFOs that knows exactly where they're going to and what they're doing. I only say that because if we compared these black, triangular shaped UFOs to the really, really common and very slow plus mostly white looking UFOs that like to be "kinda seen" or even hidden just behind the ISS. Then these are absolutely different and look sinister unlike the others which like to lurk in the background or just aways from the ISS. Then these fast, black, UFOs are definitely more realistic, wouldn't you agree?
Here's the actual full YouTube video uploaded by The Spiderman channel:
Here's the actual video description:

The above video description is word for word from the YouTube video uploaded by The Spiderman YouTube channel.
Please share your thought's and opinions also any ideas that you might have about this amazing UFO sighting filmed at the ISS, I'd also appreciate it if you could share this post with someone who you think would appreciate it, cheers.
Credit: The Spiderman YouTube Video/UFO Sightings Footage/UFO News/Canva.