This is a spectacular UFO speeding past the ISS and it then flies upwards in front of the ISS and disappears off into space. It's a NASA anomaly.

NASA is taking photos and videos from the ISS as a matter of routine and the Astronauts are catching some seriously worrying "extraordinary visitor's".

This UFO comes up from under the ISS making itself known to the cameras. It then starts accelerating forward after it's finished matching the same speed as the ISS. You'd think after this bizarre activity and a very close manoeuvre that it would go away? But the UFO then starts to speed up even more and starts overtaking the ISS! 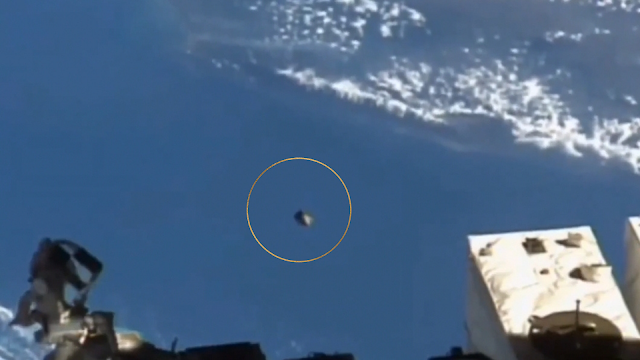 The silver metallic looking UFO continues to speed off and then it glides upwards and poof, a light comes on at the back of it which could be a Propulsion system and it's gone.

It's a strange kind of UFO because it's so small, it's silver and metallic looking and it definitely doesn't conform to the usual looking man made satellite or craft, capsule or even module that humans are used to using. So the term Extraterrestrial actually fit's the whole criteria for this incident perfectly.

This "unconventional" craft is coming so close to the ISS that the Astronauts could easily touch it if the so desire? They could approach it, maybe capture it and work it out later about how it got up to such high speeds. Following the ISS takes a lot of energy. For that space station itself to get up to the speeds it does, masses amounts of energy is spent.

The "thing" in the below image isn't human because we don't make anything like this crazy thing at all. It's not a satellite and it's nothing to do with the ISS. 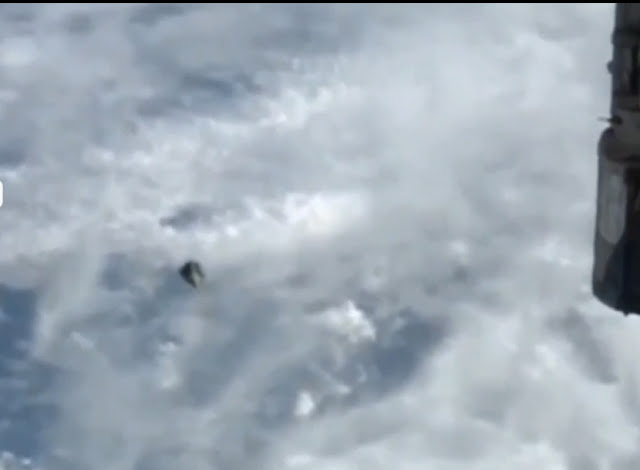 Yet here's a tiny UFO (in comparison) going what looks like 7.66 km per second! Actually I didn't really eyeball the speed of the UFO because that would be weird. I was watching the ISS live feed and that was the same speed it was going so I just guessed.

Here's the full NASA video which is something else entirely to behold!