Another UFO is found in the ISS live video feed watching the Astronauts working. The Astronauts starts a spacewalk only for a UFO turn up watching.

NASA has once again gone totally silent about an amazing UFO incident a stone's throw from the ISS.

At the 1 minuet and 49 seconds mark the camera is switched to one looking directly at the now tiny astronaut in his spacesuit fixing a cooling system. When the camera switched, bam there it is a silver metallic UFO, in all it's mystery looking at the Astronauts! 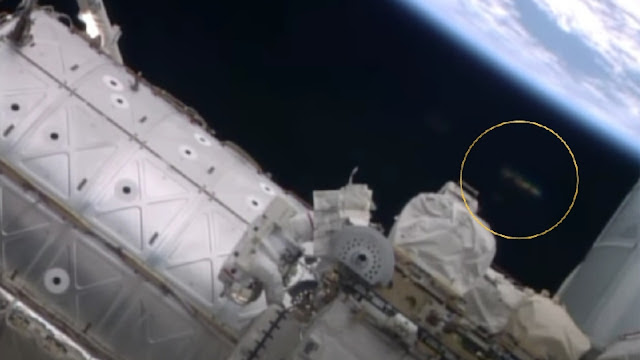 Below is a enhanced version of the image which shows the UFO right next to the ISS and the Astronaut. 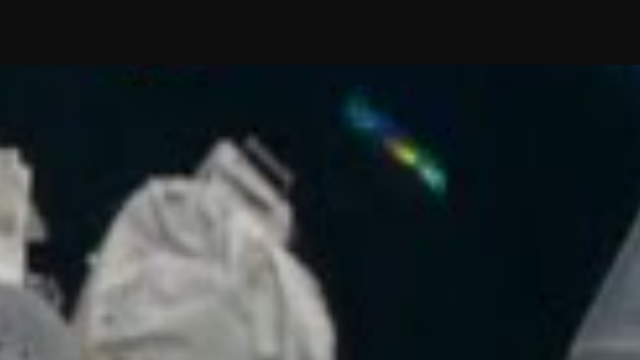 The Astronauts aboard the ISS are my favourite past time because I know that a UFO is "highly probable" to turn up on the space station live feed. But, I also want to know where they get off totally denying the endless UFOs coming to check them out! It's a national shame that obvious UFOs turn up, the feed gets turned off and when it comes back on, poof, it's gone.

Seriously though, it's every blooming week that a UFO is caught on Live TV during a spacewalk or while the camera is literally doing nothing but appreciating a stunning sun setting behind a magnificent Earth.

Where the hell do these "champions for change" or the human race ambassadors get off denying that UFOs don't appear, we can see them? It's like being at a pantomime where the audience shouts out "it's behind you" but the clueless stooge can't see a thing so yeah, it's really annoying!

They actually deny the UFO presence by inaction and making no references to it is in my book totally unforgiving. They actually admit to it but - by not referencing the UFOs in a personal blog or a comment or two, here and there. Do you want to know why they don't ever reference the UFOs turning up at the ISS?

Because logic point's to the Astronauts having signed a non disclosure document! One of those legally binding documents that the US Government love's wielding around at the more secure and sensitive parts of the Government's secret location's and departments. Think about it, the Astronauts are in space, but they never, ever, not even once write about UFOs!

The only logical conclusion is that they're not allowed to! It makes sense that when a UFO on Live TV comes trundling up to the ISS wanting a high five, and the Astronauts not even tweeting about it "not even in a human capacity" and they don't even mention it at all, it's because they can't, legally.

The astronauts who went for the spacewalk on October 7 include Expedition 41 Flight Engineers Reid Wiseman of NASA and Alexander Gerst of the European Space Agency. Their mission was to walk outside the ISS to relocate a failed cooling pump and to install a power cable device designed to provide backup electrical capability to the station’s rail car system. Their spacewalk was the 182nd in support of station assembly and maintenance and the first of both the astronauts.

Please share your thoughts with me and your opinions on what you think this can be? If you can share this post I'd appreciate it, cheers.