Okay, I really, really don't know what to think about this UFO Orb exodus that's happening right above the heads of people over Boston in the US, at all.

This looks truly bonkers, it's different, it's bizarre but I love the bizarre UFO encounters because these have a really true feel to them just like this one. Just because it looks like a movie, it's obviously not a movie but I can see past that and see it for what it is, just like you can and we both know that this has the possibility to be real. It's sure as hell different, but does different translate into actually been real, well I'm not quite sure but I hope so. Maybe it looks too good and that's why I'm a wee bit sceptical! Unless it's a fake (a really good fake) then I'm honestly lost for words! It's not from a movie I think we can safely cross that off the list and I don't think someone has just lifted it from a movie scene do you? 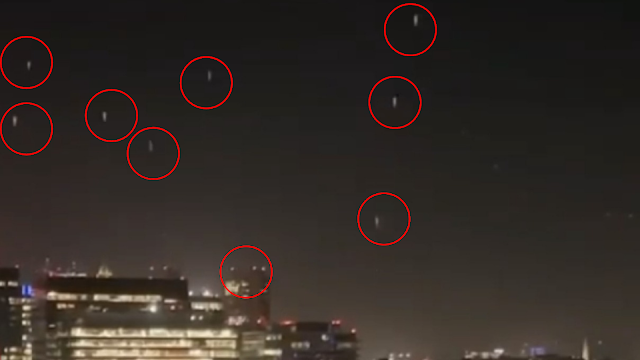 Credit: Strangeactivities Instagram Channel/UFO Sightings Footage/UFO News/Canva.
The responses on the Instagram video are very strange, not surprising because it's a very different UFO video. When people are confused or confronted with something else entirely different to what they was expecting some tend to be a bit nasty and sarcastic. I just wished people would see it for what it is and try to add something worthwhile to the answer and try to get to the bottom of it. But instead, that's (I'm afraid) asking way to much.

I've really not got the time to do a spot check on every movie about UFOs to see if this one fit's into it. (👀) I've been searching the Internet for UFOs that shows any UFOs leaving the Earth's atmosphere, but I can't find any. That's a difficult task which I'm pretty sure I'd remember seeing as many UFOs leaving the Earth in a sci-fi film, wouldn't you...

Does that mean that this is a sad looking fake UFO video, maybe? But equally, if it turns out to be a real UFO sighting then Ufology has taken a large step closer to full Alien disclosure (because we've had UFO disclosure) in my owns view. It's just that the person who uploaded this video to Instagram didn't put any information whatsoever in the description? It looks as if the camera is filming but from a static location somewhere near and on a high building overlooking Boston in Massachusetts. 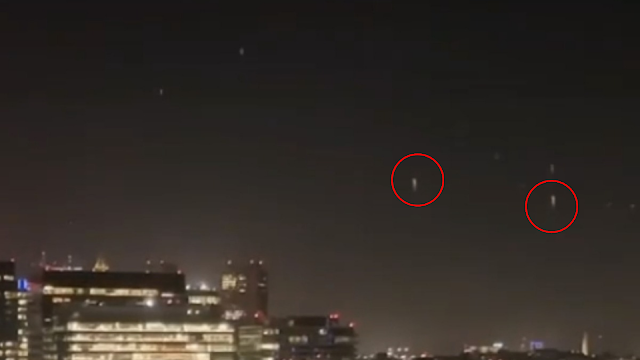 Credit: Strangeactivities Instagram Channel/UFO Sightings Footage/UFO News/Canva.
I do have a couple of reservations but overall, it looks really, really good, it looks proper, it looks like it's gonna be hard to brush aside and it's not gonna go down without a fight. It's bad ass, it's apocalyptic looking where those with spacecrafts can leave a doomed planet that's in the line of a huge asteroid that's on a collision course with Earth.

"I hope it passes any test's that people might have to help determine if it is genuine?"

Even if it turns out to be genuine as far as anyone can tell it's hard writing about this stuff which anyone else will tell you that, to write about UFOs number 1, you've gotta have thick skin and number 2, you must have hope! I have to write about this no matter what because it's literally what I do, I thoroughly enjoy it, day in and day out. I write everyday about UFOs because it's something I have had an interest in ever since I can remember. To be honest the stranger the better, the "more than likely", the better and the ones that I cannot work out - one way or another, all the more, bring it on! But the ones like this one with big implications are the ones I really like writing about. It's the fact that they all seem to be the same brightness, yep that's unusual. The fact that they're all going straight as a ruler up, yep, that's extremely strange. The fact that I can only find one video thus far, that's very suspicious (not uncommon) but definitely suspect.
Related post
The Biggest Fleet Of UFOs Just Turn Up At The ISS At 2:33 In The Video
If this one turns out to not only look like a movie, but if it turns out that it's actually real then this has the potential to change people's opinions. Knowing that UFOs are real for some people it might be based on just one UFO sighting. That doesn't mean that they're all real. It's this kinda stuff that I try to whittle down to a manageable number and I write about them asking for your help? Every single UFO article that I've written I'm asking for your help in solving it. If you have time to help out with this or any other UFO sighting which I've posted about then I'd fully appreciate it, that would be awesome.
I have the old saying ringing in my ears, that it only takes one to be real. Well, there's hundreds of UFOs here in this video so everyone can and "could" change the way we see UFOs. Use your expertise in graphics or software editing and editing skills in videos and photographs etc. Let's crack the hoax and tear up the prank, if you see a hoax here then please, tell us how it's been done and how you think it's been done specifically in this video? If you've got specialist knowledge because you know how it could be done then I'd wholeheartedly welcome your knowledge. We can all learn together, teach if need be but learning how to spot a fake UFO is something that we can all do with. Even if we as lready know how to spot a fake UFO, graphics are evolving, software gets better, hiding tell tale signs of a hoax are getting more sophisticated than the previous ones.
Just saying "fake" in a comment section is okay I guess, but we would all prefer it if you could just tell us why you say that? It really doesn't help at all, explain if you can and if you have time then I'd (we'd all) really appreciate it.

It's not a bad thing, it's annoying definitely but not a bad thing. Seeing a UFO in a video which turns out to be a fake is disheartening. Lee Lewis UFO Sightings Footage

This doesn't conform to any UFO sighting I've ever seen in the past. It's these "first's" that are the best in my view because they have the most possibilities to be real...
My reasoning for that, is that UFO hoaxers want to get a slam dunk UFO sighting, have people unable to determine if it's real or not. Examples are - like a white UFO Orb on a pitch black night sky. A black Orb passing by the Moon on a dark night or an ISS ice crystal labelled as a UFO because it's just passed the window. Even though it's only 3 mm across. That's a slam dunk to a UFO hoaxer, it'll never be on my screen because it's never gonna be figured out one way or another. I only want to write about the UFO incident that can be figured out. There's that many experts in every known field of excellence that if we come together, we can at least give it a good go at figuring it out.
The comments, that's where I'd love for each UFO sighting to have the incident documented includingtheinformationand the photosplus video, and the comments section used to analyse it and the likelihood posted by many people.

Pipe dream, I totally understand that this wish is a pipe dream. But if I don't have a goal in Ufology then why am I writing about Alien visitors or UFO sighting's? Lee Lewis UFO Sightings Footage

I really hope that someone else has caught this on video or photo's even? If it turned out to be like the Jerusalem Dome UFO sighting which was filmed from about 5 different people at 4 different angles then that would absolutely help.
Here's the absolutely stunning, but easily faked UFO video which I don't think it is, just keep an open mind:
Please share your thought's and opinions also any ideas that you might have about this amazing UFO sighting filmed right over Boston, MA in the US. I'd also appreciate it if you could share this post with someone who you think would appreciate it, cheers.
Credit: Strangeactivities Instagram Channel/UFO Sightings Footage/UFO News/Canva.