The China's Yutu-2 rover has stumbled upon a fascinating structure on the surface of the Moon and it's going in to take a closer look. What is it.

It's still not clear as to what this new cube box actually is but everyone's asking "what the heck is it" soon we'll all have that very answer.

I first heard about this "house on the Moon" or cube on the far side of the Moon just last night when I was watching TV. I thought it'd probably just be a rock or a boulder (same thing I'm sure) and that it's probably not gonna end up being anything, right? 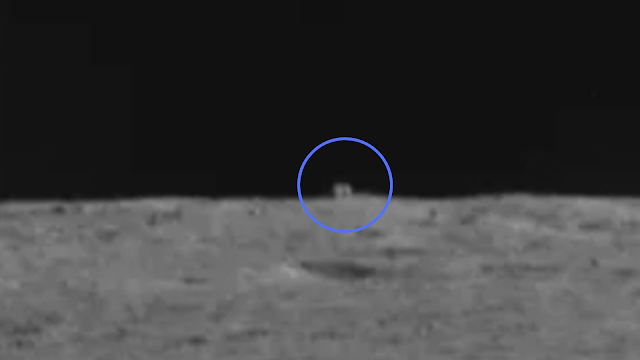 Credit: Lad Bible/Wexin/CNSA Yutu-2/Twitter/UFO Sightings Footage/UFO News/Canva.
But after checking it out as much as I can from what's available, I'm hopeful it's at least something really odd, and that it's going to throw a few spanners in the works! Now wouldn't that be awesome if it turns out to be a old hut, just sat there and could have been there for millions of years.
The Moon was apparently put into it's perfect orbit around the Earth by ancient builders type being's. Let's just face a few truths here because let's be honest, we humans have a written history going back only a few thousand years! Seriously, we can count 2 thousand years in terms of generations and still have room on the postage stamp to write our names!
Related post
Rocks On The Moon Moving By Themselves Avoiding Craters
What we "think" we know about the Moon, about the Earth itself and the space around us is observational and based on our brief understanding of science which is constantly been added to and new information becomes available, we should start to realise that the road is long. Science is literally in it's infancy even though it's so vast and so complex, there's still much, much, much more to come! There has to be because as science and scientists say, science never sleeps and literally anything is possible especially when new steps are taken such as discovering new things that exist, like Extraterrestrial entities and strange outbuildings on the Moon.
Quick quote:

The far side of the moon has relatively few flat areas, however the rover noticed that this structure certainly stood out.
Considering there isn't much on the surface of our closest celestial object, researchers were piqued by what has been described as a cube-shaped structure that was seen off in the distance.
It was estimated to be around 80 metres away from where China's Yutu-2 rover was and could be in the Von Kármán crater. Space.com journalist Andrews Jones said the Chinese have a nickname for the structure, which is 'mystery house', and they've sent the rover to the region to suss it out.

Twitter user and Space dot com journalist Andrew Jones gave a really interesting tweet about the Chinese rovers next mission to the Moon's relatively few features at least in this particular part of the Moon called the Von Kármán crater.
I try to be hopeful, I'm as hopeful as the next person but after tons of these same situations have played themselves out over decades it's almost as if we all know it's gonna end up being nothing! I'm under no illusions that what you see is what you get. But until then it really could be anything or at least something so why not explore what it could be? I'm sure that when the rover eventually  gets there we'll all have the answer and we'll all be brought back to firm ground or terra firma so-to-speak with a big bang but until then, it's a house. I'm going with what some are saying it could be, on Twitter lol. It's probably nothing, but it could be something that changes everything.
Andrew Jones Space dot com:

Ah. We have an update from Yutu-2 on the lunar far side, including an image of a cubic shape on the northern horizon ~80m away from the rover in Von Kármán crater. Referred to as "神秘小屋" ("mystery house"), the next 2-3 lunar days will be spent getting closer to check it out.

YouTube video description:
China’s Moon Rover Yutu-2 transmitted new images from Moon capturing house-like cubic shape object from the distance of ~80 meters. From the day of Yutu-2 Rover’s landing on the far side of the Moon (January 3, 2019) rover traveled more than 1 kilometer distance. Technically this “mysterious cubic object” is not an obelisk or aliens, but certainly something to check out, and hard to discern much from the image. But large boulders (right) are sometimes excavated by impacts, as seen by the Chang'e-3 mission, which launched 8 years ago on Dec 1.
Here's a great YouTube video showing us the Moon building:
Please share your thought's and opinions also any ideas that you might have about this amazing Moon anomaly. I'd also appreciate it if you could share this post with someone who you think would appreciate it, cheers.
Link:
https://t.co/LWPZoWN05I
Yutu-2 drive diary link.
Credit: Lad Bible/Wexin/CNSA Yutu-2/Twitter/UFO Sightings Footage/UFO News/Canva.