A UFO is filmed on the Moon through an amateur astronomers telescope. It's definitely coming out of a crater on the Moon and has a shadow. Lunar UFOs.

This is why it really pays off for any amateur astronomer to have his or her own telescope because of the wonders of space in full view for anyone to see.

It's strange why the mainstream media doesn't pick up anything from the outstanding amateur astronomers UFO footage which most of not all of them post online? And if they did, can you imagine the controversy it would cause - and maybe this is the reason for not covering it? 🤔 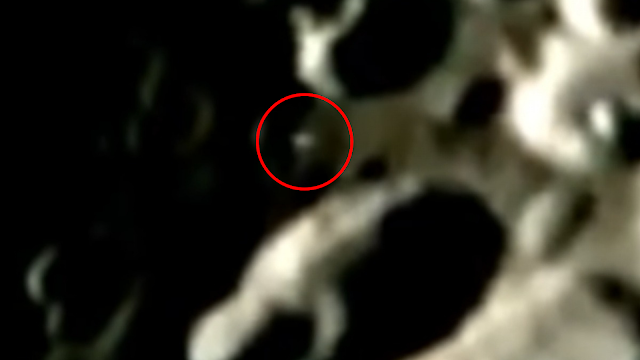 Credit: TheRealJimmyRoberts1 YouTube Video/William Durand/UFO Sightings Footage/UFO News/Canva.
If you put it into perspective like this, let's imagine for a second, and think of all the UFOs that you alone have seen over time and the ones that you thought to yourself "wow, that looks real"! Imagine for 2 seconds that you was a world class journalist - would you write about it and bring it to the world? If the answer is yes, which I think it will be, don't you think or wonder that it's a bit funny, (strange even) why these journalists haven't done so because they must see them as well? It's more than likely because it's not on the newspapers preset agenda! These mainstream media outlets have agrndas usually set by owners or interested parties with influence! If these agenda's are not on show to the public and these agenda's are implemented in secret or even if it's blatant but not admitted to, they're actually called hidden agenda's!
Related post
The Pentagon Has Satellites Filming Deep Space UFOs All The Way To Atlantic Ocean
A story like this should be in the database of all the mainstream media outlets and journalist's should have already written about it. It's undiluted, it's real evidence from a amateur astronomer who doesn't have an ulterior motive that anyone knows of. In otherword's the journalists aren't allowed to write about this type of stuff, they couldn't even if they wanted to. The only way it can be written about "if at all" is to ridicule it. So, we side step these mainstream controlled media and go straight to the astronomers channels which you can find by following the links to the channels in YouTube. Here's a good starting point 👉 link. Bill Bryson is an amateur astronomer. Then there's Crow777 which is another amateur astronomer filming everything himself and he's caught some excellent quality UFO videos. William Durand from the east Coast of the US caught this fascinating evidence of a UFO coming out of the Lunar crater. This for me has to be the best piece of evidence to date that there is living things on the Moon! He used a 12 and a half inch telescope to capture this "history making" (in alternative news for sure) UFO footage that has captured everyone's imagination since watching this superb video. I'm definitely sold on the idea that we're not alone in the universe and I know for a fact that we are being visited on a regularly basis because we're in some sort of Truman show!

Time and time again guy's we've been denied our right to know about Extraterrestrials. We have a birthright to know if we're not alone in the universe and we should know where they are, if they're not just on the Moon but elsewhere in the universe. I want to know, I'm sure that you want to know and it's not just a "thought" that I'm having. It's based on plentiful evidence! In fact, the evidence is overwhelming to the point where even the United States Department of Defense (DoD) had to release UFO videos because it knows it's overwhelming. But NASA, it's sticking it out probably all the way until push comes to shove or unless it's given a directive, given by a sitting US President?
Here's the awesome YouTube video uploaded by TheRealJimmyRoberts1 channel:
Please share your thought's and opinions also any ideas that you might have about this amazing UFO coming out of a crater on the Moon videoed by an amateur astronomer. I'd also appreciate it if you could share this post with someone who you think would appreciate it, cheers.
Credit: TheRealJimmyRoberts1 YouTube Video/UFO Sightings Footage/William Durand/UFO News/Canva.