UFOs And Flying Saucers Captured In Google Maps Near Area 51

This is a fantastic UFO sighting seen on Google Earth by an Eagle Eyed member of the public. There's many UFOs in Google Maps and Flying Saucer Disks.

Flying Saucer craft's are few and far between believe it or not because most of the UFOs caught on camera are Orbs.

Seeing something like this is rare, it really is a rare thing because it was pretty much Hollywood that promoted the typical looking Flying Saucer.

Not because they've been seen everywhere. But because it fit their narrative as Hollywood jumped onto Flying Saucers like it's made of gold. That's not to say Flying Saucers don't get videoed because they do, it's just that these specific saucer shaped UFOs are hard for Americans to take as seriously unlike an Orb is or as a triangle UFO for instance. These types are easier to believe. 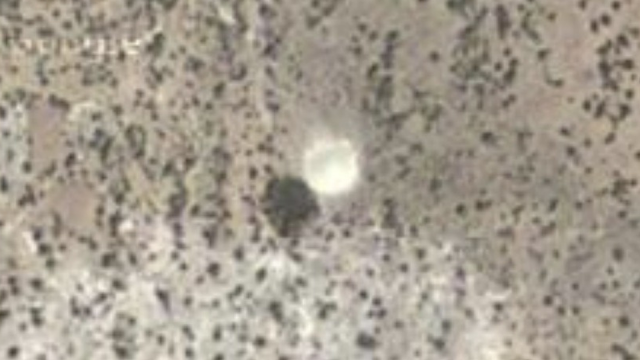 Credit: Antonio Giordano YouTube/Scott Waring YouTube/UFO Sightings Footage/UFO News/Canva.
It's the Disk shape, it's the silver and a very shiny object spinning in the air or hovering menacingly which is absolutely everything that Hollywood stands for and needed to sell their new fangled Science Fiction movies and much, much more. So firstly, for someone to then find one in Google Earth is beyond amazing. Yes there's a few black and white suspect photo's from the 1950's and the 1960's but It's still not everyday or every month even when someone photographs a Flying Saucer. But this UFO incident is bizarre and very strange and because we know the public doesn't have access to Google Earth or Google Maps satellite images, it's this is what puts this Flying Saucer beyond amazing and into perspective because it is, what it is, right. Or am I looking to deep into this? Personally I believe I'm only stating the obvious bit looking at this obviousness is what makes it bizarre.

I don't have access to change anything in Google Earth or Maps, neither do you and that's why I know it's authenticity is intact and sealed, it's beyond a doubt.

It's not a water tower, it's not a shack or modern habitat or a bird watching perch. There's no roads leading to it, there's no walking path around it, no garden, no trails no nothing! It's shadow is to the side and there's no legs, no stumps, no out house, no garage, nothing in the surrounding area like a car, a caravan, a bike or motorbike. Seriously, I'm looking for signs of anyone, someone living there or at least I'm looking for signs that people have been there either recently or in the past. Check out the Antonio Giordano YouTube video below because this video looks into it more. It's in Spanish so either have captions on or turn it down, the UFO video itself is what you should see. That my friend's is a straight up anomaly and it's a very unfamiliar anomaly but anomaly it is. Credit: Antonio Giordano YouTube/Scott Waring YouTube/UFO Sightings Footage/UFO News/Canva.
Related post
Helicopter Circling 3 UFO Spheres Downtown in Public
As far as Flying Saucer craft's goes this is a low flying craft and probably this is an intelligent decision so as to stay off any radars either friendly or commercial ie weather and communications and the friendly radar would definitely be the military. The military more than likely is aware of this because if it did not know about this, it sure as hell would want to know and right behind it would be 2 fighter Jet's. We're talking about the most advanced Air Force in the world. It knows about a bird landing in which tree and the Air Force in this particular area, it ain't worth knowing if they don't know. Which sits somewhere in the Extraterrestrial part if the spectrum.
Here's what the witness said:

First off this UFO in the photo above is inside Area 51 and not far from Area S4. S4 if you don’t know is the area of the USAF where nuclear physicists try to back engineer Aliens technology (source Bob Lazar, an amazing guy).

Here's the second Flying Saucer video which was uploaded by Scott Waring to his YouTube channel. I believe that all these Flying Saucer craft's are real, there's a whole host of other people who have the same opinion on this and like me they believe that because we've already had UFO disclosure we need to go back and assess earlier UFO sighting's which was either written off or shoved aside and ignored. We need to go back and have another look into these ones because we know that the direction of Ufology is only going in one direction. It's going to be that one day Alien disclosure has come!

Scott really goes into detail which is awesome and here's the description that accompanies the YouTube UFO video.

This video teaches you how to find these three UFOs at Area 51. Understand this information has just now hit the public because of me, so it will be a matter of about 3 months or less before Google sees this video and deletes the UFOs from their satellite mapping system. From the other UFOs revealed using Google map, that is my experience. They will delete them when they find out so check for yourself, and tell others please. Don't Bogart the knowledge... Share.

First UFO Sighting: Steps to follow for finding 108-diameter saucer: Download Google Earth. Type "Area 51," in the search box. Zoom out until you see two more dry lakebeds on the left of Area 51. Zoom in on the third lakebed with your mouse. Now you are very close. Zoom in at the Southern most tip of the lakebed. You should see a short runway with a dirt circle on one end. Zoom in on the circle where you will see planes and hangers. Zoom in on the largest gray hanger. It's five times larger than others. Half under one hanger you will clearly see a UFO of 108 feet in diameter. Use Google ruler to take some measurements of its size, height from ground and so on. Coordinates are: 36,55'35.72" N 116,00'25.33" W Google photo date placed for this location is Dec. 2, 2006.

Second UFO Sighting: Steps to follow for finding the 42-foot in diameter saucer while in flight: Start at the 108 UFO at the South side of the same lake as above. Zoom out so that you can see more of the map above you. Find the purple place dot above marked, "Nevada Test Site." Move to the purple dot. Zoom in a bit until you see a second purple dot called, "Sedan (Nuclear Test)." Move to that dot. Then look above in on the map. Look for the yellow dot marked, "US Nuke: Orkney." Zoom in on this spot, because 400 feet to the left is the saucer. Saucer size is about 42 feet in diameter using Google Ruler. Note that its shadow below is separate from the UFO meaning its in flight and you can measure its height from the ground with the Google Ruler. Coordinates are: 37,11'55.01" N 116,03'19.93" W Google photo date placed this location is Dec. 2, 2006.

Third UFO Sighting: Steps to follow for finding the "V-shaped" 64.66-foot total wingspan in flight craft: Start at the Area 51 icon at the base or type AREA 51 into the Google search box again and it will take you back there fast. Use Google ruler and go 3.14 kilometers or 1.95 miles Southwest of Area 51. Here you will see many small mountain peeks. Upon one mountain peek is a flying V-shaped craft, which leaves a diamond shaped shadow on the ground directly below it. Its coordinates on Google Earth are 37°13'02.94"N and 115°50'49.35"W View this on a digital monitor, while looking through a digital camera for a more detailed view. Also rotate the Google map from North to South using the compass to view the UFO craft properly, so you don't view it upsidedown. Google photo date placed this location is Nov. 14, 2006.

Please share your thought's and opinions also any ideas that you might have about these amazing UFO sighting's. I'd also appreciate it if you could share this post with someone who you think would appreciate it, cheers.