Rocks On The Moon Moving By Themselves Avoiding Craters

There's an argument to say that these rocks are moving on their own under their own energy. These Moon rocks avoided a crater and are huge rocks.

This isn't the usual bizarre Moon anomalies that we're all used to like Lunar UFOs or Aliens watching the astronautsfrom the edges of craters.

There's actual rocks on the surface of the Moon (if that's what they really are) I say that because these so-called rock's are definitely steering away from craters leaving what can only be described as tracks with a swerve. There's a image below in this post which shows in yellow writing the direction it took. Check out the links below to get the full picture. 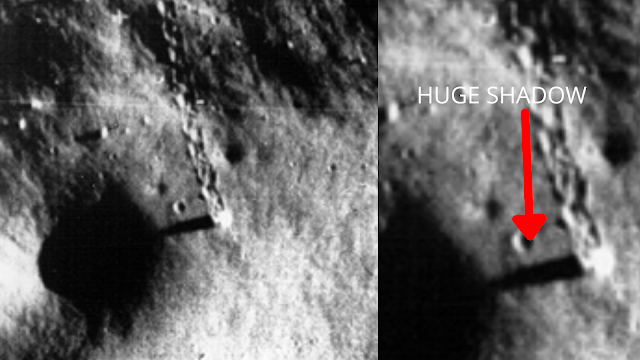 This isn't normal and let's not forget that thing's on the Moon you'd think would act differently because there's no atmosphere, gravity etc but somethings are pretty similar, ie the clear implication is that Earth's gravitational force causes the Moon to orbit Earth. This is because, as expected from Newton's third law, if Earth exerts a force on the Moon, then the Moon should exert an equal and opposite force on Earth. Check out this link to the website College Physics. 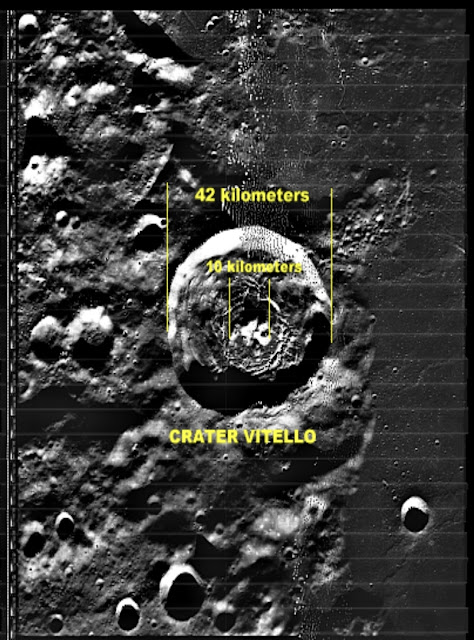 This isn't a tumbling ball of weeds like the wild west or a meteorite slamming into the Moon and tumbling into it's last ever position. These so-called "rocks" and I say that word loosely because these are bright white, reflective objects which are leaving tracks as if it was walking.

And by looking at it's shape from above plus taking into account it's shadow and the shape of that big shadow, this most certainly should not be leaving in it's wake almost footprint like human impressions. It's all very strange because it's tall, but with a small width. But yet it's leaving tracks that do not belong to a rectangle shape "rock". We can even see a change in direction when it should have ploud straight into a crater! It actually swerves or changes it's direction.

This super fantastic Moon image details it all and when we think about what's been proposed, it's blooming right! With my very limited knowledge of how objects in the vacuum of space weighing next to nothing, I simply can't look at this like a normal everyday object subject to gravity and an atmosphere with other factors because it's not within that sphere of reality so-to-speak. 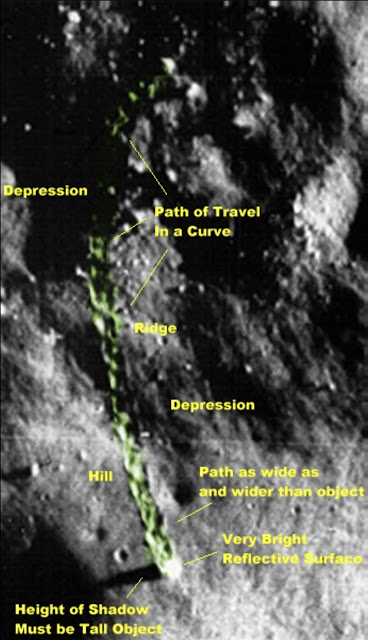 The Story According to NASA

Down slope boulder trail and boulder on the Moon.

Lunar Orbiter 5 image of a boulder (just right of center) which has rolled and slid down a slope and left a trail on the Moon's surface.

This is within the crater Vitello, and demonstrates the small role that such processes, called gravity wasting, have on the lunar surface.

The main source of surface modification on the Moon is meteorite and micro meteorite bombardment.

Personally I think that these are Moon rover's but not human made rover's. These really could be Extraterrestrial entities Lunar rover's. There's many official NASA images that show bases, entrances to the inner Moon. There's also the dark side of the Moon which we never see.

I understand that not everyone will agree with this theory. Here's the official NASA image.

Here's another excellent researched theory about this actual NASA image. Someone has gone into depth regarding this and it's very convincing, because it's good research.

Alien Machine Caught On Moon In 1967. On August 17, 1967, satellite Orbiter 5 took the following image of the moon. It shows an object that has left a definite “track” in the lunar surface. NASA said it was a rock that rolled downhill and left the track in the lunar surface. But there are some serious flaws with that explanation.

Find that awesome theory here. And there's excellent photos with in depth analysis of the terrain, the shape.

Here's a great video showing astronauts actually throwing rocks and other stuff on the Moon. It was uploaded by Martian Archaeology Channel:

Please share your thought's and opinions also any ideas that you might have about this spectacular Moon rocks anomaly. I'd also appreciate it if you could share this post with someone who you think would appreciate it, cheers.