There's no other way to describe what we're all seeing here because we can see it's a real UFO Orb on Mars and it notices the Rover & it flies off.

UFO spots the Mars Rover and literally stops absolutely still in mid air, realises it's just been spotted and it darts off behind a mountain trying so pathetically not to be seen!

I absolutely love this UFO encounter because it proves to me that there's most certainly something intelligent about UFO Orbs (at least with this UFO Orb) because it stops when it notices the Rover, it knows it's just been busted - it looks like it does that chicken dance which Ashley Simpson did on SNL when she was busted for miming because the same song came on again with her voice lol. It effectively shut her career down! 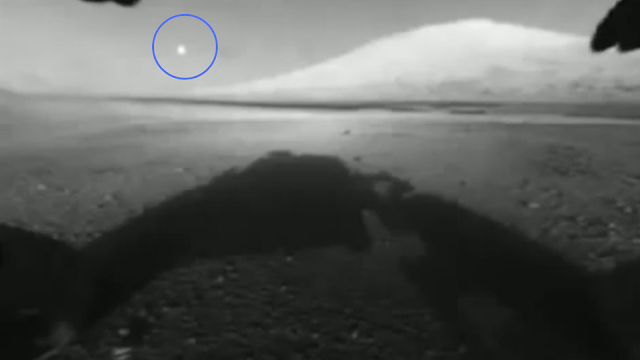 Credit: NASA Mars Rover/UFO Sightings Footage/UFO News YouTube Video/Canva.
It's so funny how people, things act when they've just been busted! The chicken dance is the perfect way to convey that awkwardness and tell the audience that "oh crap I've just had my ass handed to me" on live TV as well, lol. If there's an Alien inside that UFO Orb, it's probably got blonde hair and called Ms Piggy.
NASA's gotta be something between a Wizard and a magician with an assistant trying to make the huge elephant 🐘 in the room disappear but constantly has a substitute assistant fill in for the "beautiful assistant" from the temp agency and they keep getting it wrong! NASA will not admit it that this is a UFO, they'll probably say something like it's a rare Jupiter aligned blah, bah weather anomaly in the crater of, blah blah, that's in conjunction with ice deposits in low Mars blah de bloody blah! 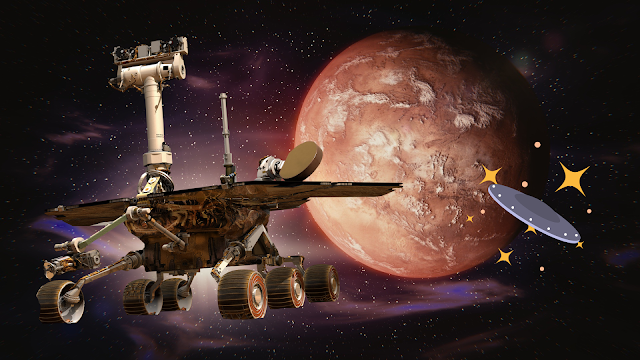 Credit: NASA Mars Rover/UFO Sightings Footage/UFO News YouTube Video/Canva.
Science, just bamboozle the little people with tons of packed out scientific words based on minerals found in the Martian soil with words that mean nothing. It's what they do, they've scientists upon scientists just waiting to bamboozle the public with sciencey sounding words with graphs and pie charts and all the while trying to get what we can see is a UFO, to be seen as a regular Mars anomaly which isn't a UFO.

It was recorded way back in 2012 on 23rd of August - so it's been around the block so to speak but it's the first time that we've seen it (the video) here at USF. But like they say, look and you will find.
Guys seriously what the hell, this is what I believe to be the moment when the UFO realises it's not alone and that's why we see it all of a sudden stop in it's tracks but in mid air and then it really does look like it's turning around and then it darts off going low and fast towards the middle of the screen but left of the mountain in the right of the screen.

Even as it darts off for cover it makes another turn in the air towards the lower part of the mountain. This is an intelligently controlled UFO for sure. It even starts to flash or turning as it was held in mid air for what I call the scanning of the ancient floor bed?
Here's the actual video from the NASA Mars Rover uploaded by UFO News:
Please share your thought's and opinions also any ideas that you might have about this amazing UFO sighting on Mars. I'd also appreciate it if you could share this post with someone who you think would appreciate it.
Credit: NASA Mars Rover/UFO Sightings Footage/UFO News YouTube Video/Canva.