There's a long, silver in color ufo Mothership at the Sun that has been taking plasma plumes of raw energy probably refuelling the engines at the sun.

This is exceptional and interesting stuff, we're all seeing this massive UFO sighting from the Sun, right?

It's not just me seeing this absolutely insane looking and unimaginably big Alien Spaceship the likes of which if humans was to build this, it'd take a million years, it's larger than the Earth by some considerable margin! This is why I'm saying that it's unimaginable because it's something that is out of the scope of our remit, abilities and comparing it to a giant the size of any that has ever existed on Earth, it'd still take a bizillion years to make! 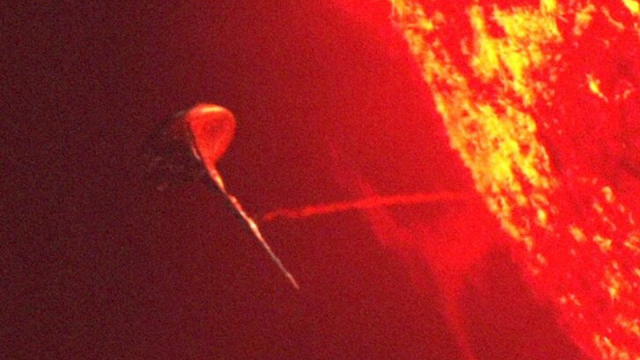 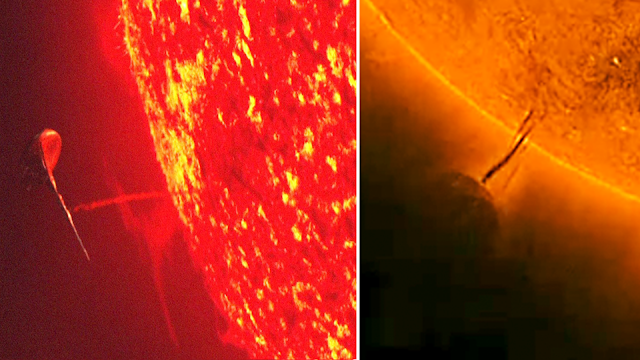 Just how big are these Extraterrestrial entities? How big are their hands for Bejebus sake! Who or what rather do they eat? Where's the nourishments coming from and why are they refuelling at the Sun? They might even be in trouble and caught in a plasma plume vortex and only just managed to escape the effects of it? It's all opinions and context because we don't have any news from NASA. Until NASA comes forward with what they know, it's all speculation.

Astronomers from The University of Hawaii, believe aliens are living in the Sun. Why else would NASA be using an advanced telescope to observe it? It is probably for them to communicate.

I've literally just done another UFO sighting news article about another massive UFO sighting that happened at the Sun, observed by the NASA Solar Heliosphere Observatory. Guy's I don't know what to say, it's just outnof this world and ee even see this one taking a plasma plume of directed, raw energy straight into the Tack shaped craft which just shouldn't be happening but it is.

Here's some of the story that I've written about this, I sincerely don't know how to describe it other than it's a massive UFO craft and it's taking in what appears to be raw energy and then turning it into directed plasma plumes.

Be advised, this is not a joke. this was spotted by the NASA Solar Heliosphere Observatory and it's just so bizarre but I'm going to go over some details with you because this video has to be seen and really needs major attention from the general population just to let them know how strange it is with the sun, to have these large objects flying around the sun in these plasma plumes of raw energy. We have no idea what they are, but my personal opinion is that they're alien space craft getting their power directly from the sun because there's no other explanation for these UFOs and Plasma plumes. I'm going to go over it one more time with this mother ship or UFO shaped craft (we can't say exactly what it is) which is being filmed...

This footage is authentic, there are plenty of videos that have been captured the European Space Agencies on behalf of NASA showing the same UFOs repeatedly going to the Sun but they have all been reported as 'Planets' or 'Sun Sparkles' or Comet's. So, be careful not to get caught out by the media who will try to convince you that this footage is just a glitch or taken out 9f context or something else entirely. We've all got our 9wn eye's, we've got our own thought process, so please use common sense when coming to a concert conclusion on these massive, planet sized UFO structures around the Sun.

NASA has been hiding the evidence for years but this time it is just too much even for them, they can't and will not hide what is happening in space from us anymore and we are sure that more and more alien disclosure events are going to happen even if that means the whole UFO, extraterrestrial situation will be revealed to all of us.

Nasa should be looking for answers now and not just brushing us off with lies and making us think it's nothing. They did the same thing when NASA pictures showed that Alien's where on the Moon, remember? That was then but this is now, they can't just make excuses anymore, because so many people have seen this thing. It's real, it happened. Now NASA should release all of the information that they have since everyone has witnessed it already.

And it isn't just the U.S government keeping a lid on the existence of UFOs, according to John Podesta's emails a senior u.k ambassador has directly confirmed the existence of extraterrestrial life and the US governments involvement in their interrogation and handling. Its great to feel acknowledged that we are not alone on this earth but the urge to know why these ET's are here and who or what they are still stirs up a debate.

Obviously nasa is covering up the existence of UFOS. They have no choice, they are a government agency who needs to take America into their new world order agenda. I think we all know what is going on here.

According to some, NASA are trying to cover up the discovery of aliens by refusing to disclose live stream footage from Kuiper belt object 2014 MU69. Their excuse? Not enough bandwidth!

Here's the epic video that was uploaded to YouTube by UFO News channel:

NASA Video Shows UFO With A Plasma Plume Of Directed Raw Energy Straight Into The Base Of The UFO.