Antarctica Flying Saucer Emerges Out Of The Ice

There's been a fantastic UFO discovery in Antarctica by author Brad Olsen. The grey metallic UFO has been discovered using Google Earth and Maps.

There's something strange going on in Antarctica and everyone knows it, but it seems like nobody can do anything about it because it's so far away and so inhospitable.

UFOs are coming out of the ice as soon as it thaws which with global warming (believe it or not) but global warming is definitely a thing, it's been proven so there's gonna be a lot more UFOs literally falling out of the ice. It's melting the ice quicker than ever and from the other end of the spectrum it's giving us brand new archaeology discoveries like thousands of years old Viking bow and arrows in Europe and the surrounding areas which is fascinating stuff, you should check that out too. 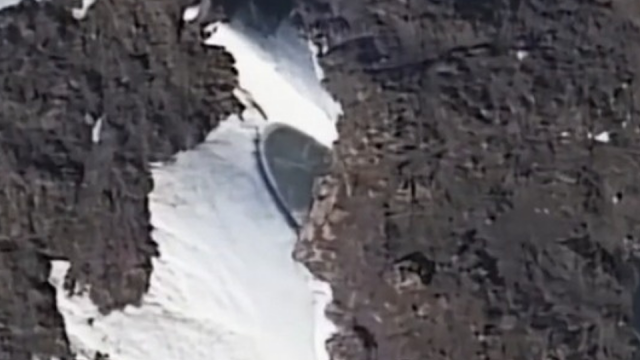 Credit: History Channel YouTube/UFO Sighting's Footage/UFO News/Canva.
Antarctica is also giving Eagle eyed viewers using Google Earth some epic and fantastic discoveries. But remember that Antarctica is huge, It's so vast with nothing but snow and ice landing on huge mountains. There's lakes and while most of them are frozen, there's still some that are not frozen. There's tons of strange anomalies to be discovered right now and some of the best UFO sighting's that there is. If you look up on Google about UFOs and Antarctica, you'll see exactly what I mean.
Related post
3000 Yr Old Ancient Astronaut And Spaceship Artefact Found In Museum
This is a silver UFO with a shiny silver bezel which goes right round the outside of the UFO. I genuinely believe that it's the outside of a metallic grey looking UFO. Look, here's another strange part about this story that got me thinking about when it was discovered? I'm really confident that this UFO was discovered quite a while ago but it seems like someone has recently rediscovered this brilliant Flying Saucer, it doesn't matter but the facts do matter, right! It's almost as if the people behind the History Channel UFO TV show are trying to have us all believe that this was a recent discovery. Don't be fooled, this is an already mentioned Flying Saucer which was written about a fair few years ago and even Secureteam10 actually did a video for YouTube for this particular UFO discovery.
Below I've circled in red the area where the person who discovered this had to zoom in and how he saw it from this I'll never know, but what an awesome example of determination and probably luck had a bit to do with it also. 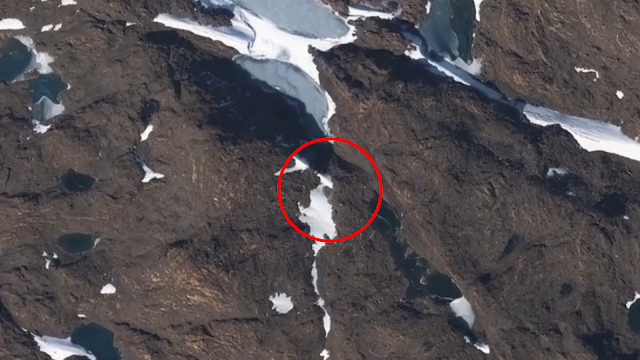 Credit: History Channel YouTube/UFO Sighting's Footage/UFO News/Canva.
An investigator (author Brad Olsen) comes across something extraordinary while scanning images of Antarctica and what I believe he's found Is a huge UFO. See more in this video from Proof Is Out There Solar Spaceship & Invisibility Cloak. Is the theory about this been a UFO that was parked up thousands upon thousands of years ago and that it was part of a Mars transportation system or service, true? I know it's possible that we are going to be seeing even more UFOs that will be unfrozen from the ice in Antarctica, so we should say "let's wait until another one comes to light" until we give our opinion...
Here's the epic video that was uploaded to YouTube by the History Channel:
Please like and share this post with anyone else who you think might appreciate the UFO sighting that happened to be melting out of the ice in Antarctica. It's a good sized Flying Saucer as well that's actually half in and half out of a cave like structure.
Credit: History Channel YouTube/UFO Sighting's Footage/UFO News/Canva.