This is an ancient Alien being's spaceship that was literally found inside of a museum in Istanbul in Turkey. It's one of many ancient spaceships.

This is probably the hardest ancient astronaut artefact, to be explained away by archaeologists and scientists.

When I look at this I cannot mix it up with another similar looking ancient artefact or another known piece of ancient mechanisms or a human powered weapon for that matter! But believe it or not there's more than just 1 ancient looking spaceship that has been discovered on archeological digs. I've added a video at the bottom of this post with 5 different Ancient looking spaceships.
Quote:

The “Toprakkale Space Shuttle” was believed to be a sculpture from the kingdom of Urartu. After the Ministry of Arts and Culture Memorial and Museums Department conducted chemical and petrographical analyses, revealing the true age of the ‘artifact,’ many have started questioning how the object made its way to the museum in the first place. 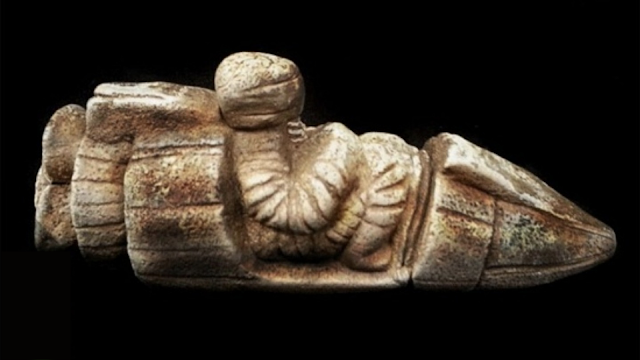 Credit: Howandwhy's/Dark YouTube Channel/Science Vibe/UFO Sightings Footage/UFO News/Canva.
It could be a lifting mechanism that uses ropes, pulleys or cogs etc I suppose but these don't need rocket thrusters or a full spacesuit. There's nothing remotely similar to this Oopart (Out of Place Artefact) and that's going way back 3000 years ago. We're talking about 1K years before Christ here. We aren't even in the ball park with anything that we can say for a slight chance or let alone for sure that "it could be a such and such".
Related post
Ancient Discovery In Mexico Could Change Everything We Thought We Knew
That makes this a "true and bonafide unknown object of huge importance" but of which it's importance is very much at the centre of the debate because it's either proof of ancient Alien being's visiting this planet (because they're Extraterrestrial entities) and we must be seeing their craft's? Or, it's more proof of ancient mankind been more advanced than previously thought? What about 2 timelines been in play. There could be one very public timeline and the other one could be totally hidden away from the public? It could be advanced, it could be deliberately hidden from the public (see Admiral Byrd and his secret mission to Antarctica) so it's not as silly as it sounds, the only thing that let's us all down is the lack of knowledge! Ie we would never laugh at there been a secret hidden away civilization if Admiral Byrd's mission to Antarctica was common knowledge! But because it's not as common as say toilet roll, people laugh at the notion. Is our planet's history been totally controlled and directed and manipulated even to this day, now the 11:47pm on the 31st July, 2022! 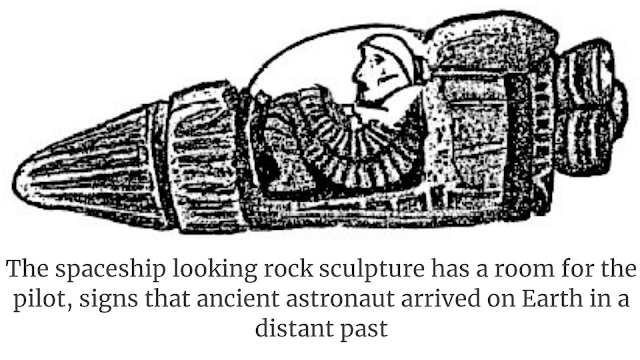 Credit: Howandwhy's/Dark YouTube Channel/Science Vibe/UFO Sightings Footage/UFO News/Canva.
There's nothing to compare it to from 3000 years ago so it's pretty much a stand alone ancient object. Guy's, it's a straight up spaceship anomaly from a time that we know little. It should not exist because that design, the whole craft shape doesn't come into existence until recently. And yet there it is, found in a museum. But what we do know is that all the writing from 3000 years (a craft statue from before Christ, that's mind blowing) ago shows absolutely nothing remotely looking like this miniature spaceship.
Here's a quick quote from Howandwhy's:

A 3000-year-old spaceship-looking artifact is one of the most famous artifacts that supposedly prove the fact of the arrival of ancient aliens on Earth. Zecharia Sitchin was the first person that drew attention to it, having discovered the artifact in Turkey in 1973.
This mysterious stone artifact incredibly resembles a rocket with modern engines, in which a man is shown sitting in a spacesuit. It could be the ultimate proof for the ancient astronaut theorists that the otherworldly beings visited Earth in the distant past.
According to Sitchin, the artifact was found in a town called Tushpa, modern-day Toprakkale not far from Van Lake.

There's really not a lot known about this straight up mystery and it's not going away anytime soon so we may as well investigate this spaceship looking artefact and we all should (international community) get to the bottom of what this really is with all the leading technology and the leading scientists in their own respective areas. This needs to be proved and if you agree with me, please share your thought's with all of us right here in the comments.

This still stands, all the information contained within this post is still either fact, verified, anomaly or unchanged. Therefore the statue here in this post is still one of the all time biggest enigmas - if you ask me, this needs to be discussed at the highest level of Government because "something doesn't make sense" and there could be any number of devices, machines hidden underground just waiting for man to discover them?

Almost all of the information surrounding the artifact was written as follows:

“It is confirmed that the spaceship that is now in the Istanbul Archeological Museum was found in an archeological dig made in 1975 in the old city of Tuspa that is also known as Toprakkale. It is in the northeast of the Van lake where the Urartu Kingdom spread between 830-612 BC.”

Here us a great quote by the director of the Istanbul Archeological Museum and he actually went on record with saying that the object was 25 yrs old:

When a three-thousand-year-old Space Module was discovered in storage at Archaeological Museum of Istanbul, it quickly gained attention. The ‘ancient’ space module has five engines and is 23 centimeters long. Now, the General Director of the Museum, Alpay Pasinli, Ph.D., has come forward to say the artifact is 25 years old, tops.

There's really no way of knowing what happened in times of the past where nothing was recorded or nobody was taking notes. The further we go back in ancient times, "the more" we don't know. Mankind is relatively a young species. We're definitely not sharing the real truth that there is of our ancient origins, with each other! And, on the many artefacts to come from museums, these are deliberately hidden away from us. It's all because there's a preferred history and the real history is wrongfully kept away from everyone and used in favour of the enlightened ones, so-to-speak.
Here's a fascinating YouTube video uploaded by Dark5 showing 5 different ancient Alien spaceships which are all said to be discovered by people on archeological digs:
Please share your thought's and opinions also any ideas that you might have about this amazing Ancient Alien being's spaceship found in Turkey. I'd also appreciate it if you could share this post with someone who you think would appreciate it, cheers.
Credit: Howandwhy's/Dark YouTube Channel/Science Vibe/UFO Sightings Footage/UFO News/Canva.