Ancient Alien artefacts was discovered in 2012 but what has recently been released by the Mexican government shows Alien being's and Flying Saucers.

Construction began in December 2018 and what seems to have happened is the first lot discovered was widely circulated online to various ancient Alien groups, Mayan groups and UFO enthusiasts also began to research these.

Soon after the discoveries people started coming forward around the area these were found saying lot's of strange thing's, artefacts and statues alike have been found in that area before. The narrator has said that:
There's no other way to describe these Mayan artefacts and statues, relics other than as looking like Extraterrestrial entities. You know what, I can totally understand why he's saying this in the video. But what's just come to me is that yes, while these statues and relics definitely look like a modern day Alien being's description, but what we haven't thought about is that we modern day people might be being manipulated all along and that our way of looking at these could have been planted all along? I mean, where did the first modern day person get it from?

Are we 100 percent sure that this way of describing an Alien hasn't been here all along?

That would make more sense than thinking that all of a sudden, some random and unknown person 🤔 actually decided to draw or paint or even sculpt an Alien being and it's image is now embedded into people's psychology... because that latter part really does not make sense - but if you look at it and seperate how modern humans describe an Alien or how humans now would say an Alien entity looks with the big black almond shaped eye's. The overwhelming size of it's head in contrast to it's skinny body, it's colour been grey and 3 long fingers.
Related post
Actual Physical Proof That Extraterrestrial Exist With A Real Alien Skull
Curiosity; the Mexican government put on display ancient artefacts which they said was discovered but quickly hidden away from the public for over 80 years. Some ancient Alien groups believe that on some of the artefacts was depicted UFOs and Flying Disk like depictions. Was this why they was put away or was it simply because of a sensitive cultural situation? Either way, these depictions are inescapable by modern humans that they look remarkably like Extraterrestrial Spaceships. And I have to agree, don't you? 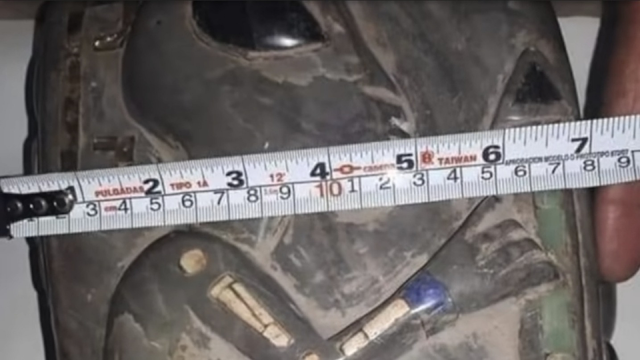 Workers reveal that more artifacts have been discovered inside this ancient Mayan Tunnel. Today, we take a look at what these workers discovered under this ancient Mayan tunnel. Last month various photographs started to make the round on social media, showing what appeared to be ancient Mayan artifacts. Interestingly some of these stood out because they showed what looked like mysterious beings, with some going on to say that they look eerily similar to aliens. Now more photographs have emerged online showing similar looking beings.

You must admit that there's no clear reason why someone or some agency or Government would even benefit from such an elaborate hoax, right? What's actually in it for some person to fake these other than selling on carved statue? When we scratch the surface the hoaxing of ancient Alien being's makes no sense monetary wise. And that makes it even more interesting and possibly more real than before. Lee Lewis UFO Sightings Footage

What we're seeing here in the discovery inside the ancient Mayan cave, isn't far off from how we see Alien Greys now, in today's society. So who's influencing who or has it always been like that with a huge chunk in the middle of time, missing? 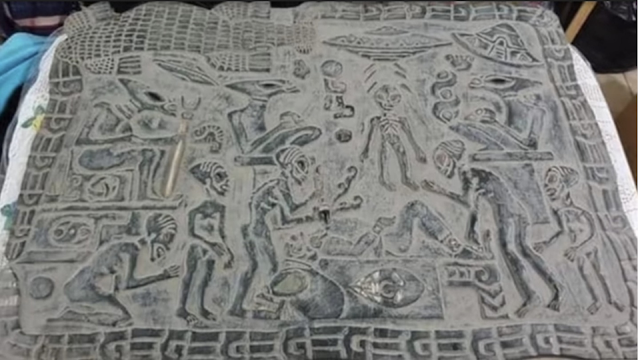 Credit: Unexplained Mysteries YouTube Video/UFO Sightings Footage/UFO News/Canva.
I don't believe in coincidences at all, and this one (this coincidence) that ancient people obviously described Alien being's to look the same way as we describe them is probably about as big of a coincidence as it can be! And I put forward that because nobody can pinpoint the time or the actual person that gave us a modern way to of describing an Alien image? It's now widely accepted as what an Alien looks like, I put forward that it's alway's been described in that way. And if so, it just might be described that way because that is exactly how they look because Mayan people was actively involved with Extraterrestrials.

If these discoveries turn out to be real it would pretty much rewrite history, said on person about the ancient statues and carvings in the comments.

To back it up we've got a time line and an obvious looking Alien that hasn't changed since the ancient times. That it's always been seen like that and the only thing that has changed over time was how people saw and how people talked about Alien being's? Other than that it's been seen as an Alien Grey like I've just described above since forever by humans. 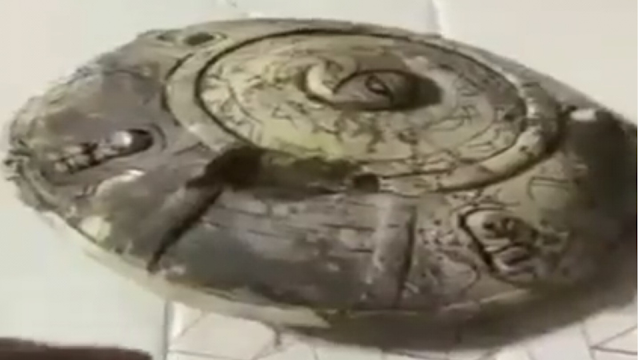 Credit: Unexplained Mysteries YouTube Video/UFO Sightings Footage/UFO News/Canva.
Nobody can point to a time, place or person and say this is the first time Alien Greys were described as tall, thin, big black almond eyes because we have Mayan statues depicting the very same details. Surely if a statue looking exactly like a modern Alien existed we'll before it was "so-called" first written about, surely the statue states loud and clearly that it's not true, people were describing them way before the writing of them. 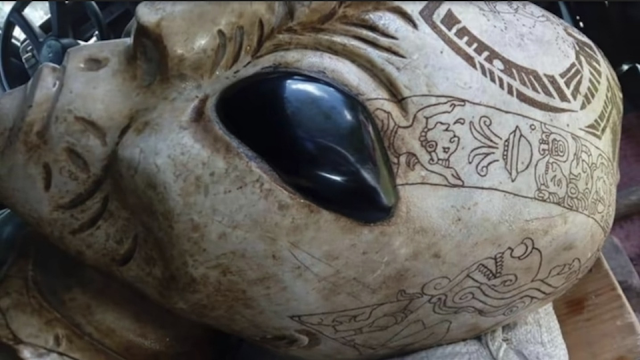 Credit: Unexplained Mysteries YouTube Video/Mexican Government/Pinterest/UFO Sightings Footage/UFO News/Canva.
Basically we need to recognise that Alien Greys have been on this Earth for a long time and not just since recent sighting's and encounters? I'm pretty sure that you've also got a point to make and please, I really encourage you to "point out anything that you can add to this". You know what, this discussion also reminds me of the Dinosaur carved into a solid stone jungle building on it's elaborately carved door frame. It proves beyond any doubt that Dinosaurs and humans coexistence together as opposed to what mainstream teaching would have us believe. But that was found to be a case of "nothing changes even in the face of undeniable proof". The relief depiction in solid stone was even carved well before the actual word Dinosaur was invented. Before the bones for a Stegosaurus was widely known about and plus, this building was in the jungle well away from any influences that could be used to help create the carving.
Related post
Evidence That Dinosaurs And Humans Lived Together
I've pointed that out to show how, information can be suppressed and often does get suppressed and often by sources you would never think would be involved in anything like that. Did you know that deliberate ignorance to such thing's and "doing nothing" when you know about something like that is still just as bad as if they covered up the fact? Ignorance is no defence is how it's phrased.
In this photo below we see an Alien Grey with it's classic big black tear drop shaped eye's, it's bulbous head, thin body and small tight lips. There's a few humanoid exceptions like the fingers and nose plus the ears. But overall it's definitely a life like representation of what we call today an Alien Grey. It's totally unmistakable and as a rational modern day person "I have to ask, how can this be?"
There's gotta be something missing from our time line? How come the Mayan people were crafting detailed statues and reliefs, miniature ornaments of Flying Saucers in a time where technology was literally the Pyramids, the wheel, metallurgy, swords a hammers, tunneling a cave and sophisticated farming practices? Why was a certain group of people carving out real life depictions of UFOs and Aliens alike? Unless it's all one big massive misinformation project then guy's, it is what it is. Alienschave been present throughout the ages and because of super sophisticated technologies, advanced propulsion systems for aerial vehicles, why wouldn't the super elite "the top, top 1 percent" want all that goodness to themselves, their kind, their offspring, their bloodlines? But at what cost? What can they offer these Extraterrestrial entities operating on Earth that they couldn't just take anyway's? 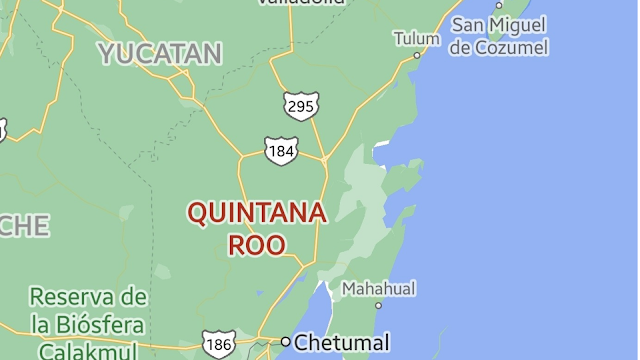 Credit: Unexplained Mysteries YouTube Video/UFO Sightings Footage/UFO News/Canva.
How about a never ending supply of humans to do whatever minus any of the bloodlines of course. Access to land for colonies underground ie Alien bases. And you know what if you think that that's far fetched then what about the secret CIA prisons around the world? What about the verified secret testing on humans, the projects which over time have been disclosed through whistle-blowers? So after thinking about it, I absolutely wouldn't be surprised by a secret pact with Alien being's and a very small elite of people and bloodlines which control everything on Earth - would you...
Here's the full YouTube video uploaded by Unexplained Mysteries:
Please share your thought's and opinions also any ideas that you might have about any of the ancient Mayan artefacts and just how did the ancient Mayan people carve statues of what look exactly like what we modern day people interpret an Alien Grey as looking like? I'd also appreciate it if you could share this post with someone who you think would appreciate it, cheers.
Credit: Unexplained Mysteries YouTube Video/Mexican Government/Pinterest/UFO Sightings Footage/UFO News/Canva.