A guy getting a drink of water during the middle of the night on September 18th of 2017 filmed 8 to 10 UFO light Orbs over city of O'hau in Hawaii.

Apparently UFOs are real now because the mainstream media has said so, it's only taken forever for these journalists to cover it.

Anyways, better late than never and I suppose someone has to tell the truth to the people, (that there's thing's out there that we know little or next to nothing about? Alien's are real because when the UAP videos were released, the Government only left one answer that it could be, Extraterrestrial entities because it's not another countries advanced weapons technology. 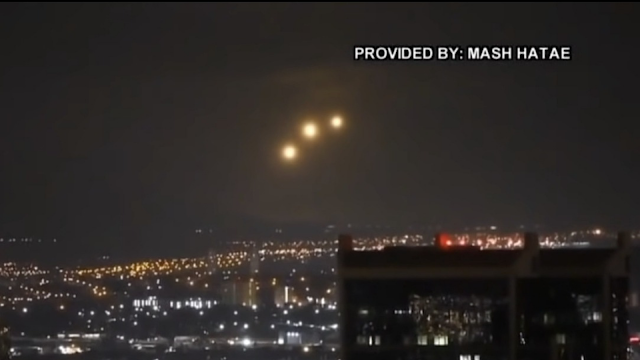 Credit: Mash Hatae/KHON2 News Media/UFO Sightings Footage/UFO News/Canva.
This UFO incident in particular was caught on camera right slap bang in the middle of a city at night and with the ground directly underneath the UFOs being lived on. I'm mentioning this because of the obvious answer many people will be thinking that this is flares dropped out of a military plane, but they can't even drop litter let alone flares over a city especially where buildings are, that's just a safety aspect becausethe flares droppedby planes burn.
Related post
The Most Detailed Silver Flying Saucer Over Hull England
There's always a good UFO encounter that the world looks yo for answers, as it goes this one fit's the criteria for the whole world to get behind and demand answers but no, not this one for some reason? 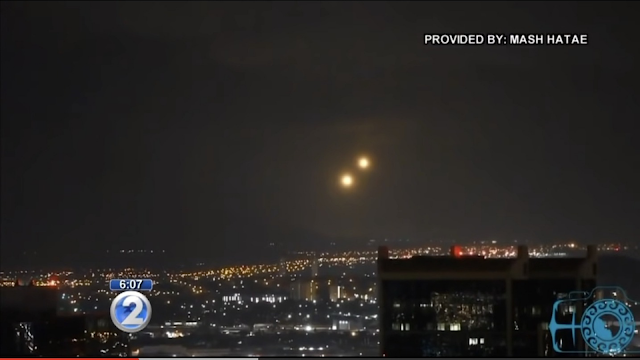 Credit: Mash Hatae/KHON2 News Media/UFO Sightings Footage/UFO News/Canva.
The incident took place early hours in the morning and we're apparently only seeing this because of someone who's seen it by chance... He also states that there was 8 to 10 of these lights altogether and he filmed it from where he was looking from, Kaka‘ako.
Related post
UFO Changing Shape Over Nellis Air Force Base Including Audio
by a guy called Mash Hatae took it and because it's all verifiable and a video with a guy willing to talk about it, and allow the mainstream media to use his name, that's more than likely why the mainstream media journalist's have picked up the story? See, most UFO stories are anonymous or nobody can quite pin down the person who filmed the UFO sighting? Maybe that's what has stopped the journalists from writing about Alien visitors but naturally, the main reasons for their decision not to write about, or not to mention, no muttering, no whispers or basically anything else like that which insinuates UFOs are real, is because mainstream media has a script, a daily script given to them and as you probably already know, UFOs haven't been in that script for decades or since Roswell anyways!
It's extremely sad but that's just the way it is. It's a UFO sighting, it's over a major city, it's probably had a lot more eye witnesses but only this guy caught some of it on camera. It was September 18th in 2017 and what's become of this UFO sighting? Nothing.
News (ibtimes) quote:

The US Army, Hawaii Air National Guard (HI ANG), etc have not claimed any responsibility about these mysterious lights and no official statements were made by them regarding this strange occurrence in the night sky. A news report quoted the Federal Aviation Administration (FAA) as saying that it received no reports from the public regarding the baffling incident.

But as we all know, people love to film UFOs, and after filming a strange looking UFO the last thing on anyone's mind us to tell the Air National Guard, lol. Seriously, it's probably go to be the last thing that someone remembers or even knows how to do and calling the FAA is the least thing to do after that one! Of course the places haven't had any concerns or enquiries about planes in the sky over West, Central Oahu. It had just happened, maybe a couple of years later maybe by UFO researchers or journalists but it's definitely not the first thing a UFO eye witness thinks about doing.
Here's The eye witnesses (Mash Hatae) testimony which is a short one:

Mash Hatae says he woke up at around 2:30 a.m. to get some water, and bright lights in the sky caught his eye.

Here's the full video which was uploaded to YouTube by KHON2 News YouTube Channel:
Please share your thought's and opinions also any ideas that you might have about this amazing UFO sighting over Oahu in Hawaii. I'd also appreciate it if you could share this post with someone who you think would appreciate it, cheers.
Credit: Mash Hatae/KHON2 News Media/UFO Sightings Footage/UFO News/Canva.