14 Bright UFO Orbs Over The Atlantic Ocean Filmed By Journalist

A guy called William Guy who's a journalist filmed what appears to be 14 UFOs over the Atlantic Ocean. These UFOs are very real. Multiple UFOs ocean.

This UFO sighting happened at a time when UFO sighting's where at an all time high and the Journalist who filmed this 14 UFO sighting is called William Guy.

The oceans of the world are getting a lot of attention from Extraterrestrial vehicles or UFOs as they're called (take note DoD) in the real word. I've posted on underwater UFO bases, and yes, even Google Earth has discovered multiple UFO bases on land and definitely under the water. There's always someone who will check Google Earth with a fine toothecomb. 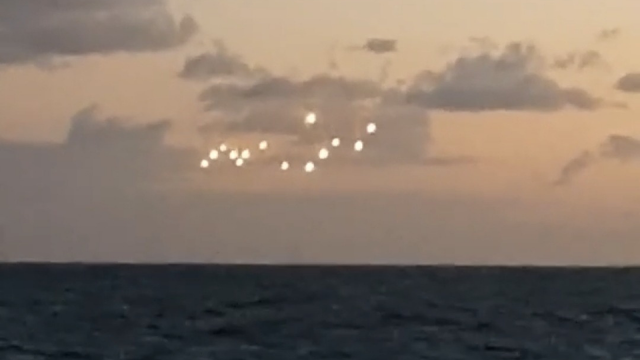 We're all going to have to get used to these amazing crafts not just because I think it's gonna happen in the future but because the United States Government released "3 Military grade - UAP - related UFO Sighting's Footage" and guy's, you know for a fact that they did, right.

So yeah, it's not because I'm deluded or misreading a press release from the White House, it's because of the three Unidentified Aerial Phenomena or UAP videos which was declassified by the US Department of Defence (DoD). They actually passed the three UAP videos onto the United States Navy (they literally went full circle because it's the US Navy pilots who filmed them) and the US Navy was the ones who actually released the videos to the public in the end!

It's not a suggestion, it's not an opinion I've got and it's certainly not up for debate with anyone still not aware that this happened. Seriously, people are still posting in Reddit and Twitter etc "are UFOs real". I kid you not, people are still in the past, where they're posting questions about thing's that have been verified now. Okay, I can totally see that some people might not be as up to date as the next person but if you know anything about Ufology then you should at least know that at the core of this historic genre is the 3 UAP videos. Well they are for me because it's the disclosure we've all been waiting for. I know some people who did a full about turn in their beliefs because of the UAP - UFO disclosure in 2017.

It was the year that Ufology got to finally say "I told you so".

That's what I'm talking about, absolute vindication. Absolute vindication of the highest order because at one time, people eas put in mental asylums for their beliefs (not me personally) but yes, pre 1900 people who believed in "little green men as they put it" where incarcerated for their own good in secure hospitals and tortured with electricity.

Anyway's, the Atlantic Ocean had fourteen UFO visitor's a few years back and the guy who was filming it all unfold was called William Guy and he knows s story when he sees it.

Here's the epic video that shows us 14 UFOs over the Atlantic Ocean and it's been folmed by a journalist so it's more than likely a real UFO sighting: