Huge UFO Sighting At The Sun Nicknamed The Death Star

This is a Sun flare, that's depending on who you ask and what you believe because even Alien spacecraft hasn't been ruled out. it might be a real UFO.

This is a fantastic UFO, Corona prominence or a an anchored solar flare but whichever one you decide to choose to call it, this is a well rehearsed refusal to see exactly what it is!

All of a sudden when a "brand new Sun anomaly" brings itself to light (excuse the pun) it would seem that everyone and their pet dog knows everything that there is to know about what is happening?

Here's the key to this UFO and I'm quoting Weekly World News here:

The black, Death Star-like, orb is briefly engulfed in light from the sun, then flies off into space.

It's the object been observed flying off into space which was what absolutely proves to me at least that there's a lot, lot more to this Jupiter sized UFO! NASA knows it, but they don't like to comment crazy talk even though looking for Extraterrestrial entities in space is their number 1 reason when time comes to ask Congress for more funding! And that, that right there should tell you all you need to know about NASA. It's just a club for scientist's and astrophysicists to kick back and delegate to the juniors. Looking for Aliens only serves a higher purpose in my view. Know more by researching this for yourself like I have and you'll discover what I did... 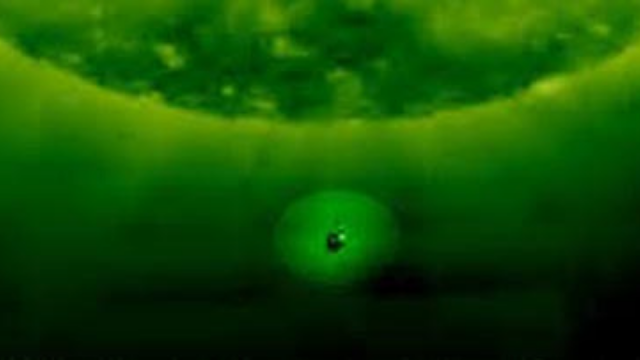 That's probably why it's been given numerous different names! Expert number 1 calls it a solar flare, expert number 2 calls it a Corona prominence, expert number 3 calls it a UFO refuelling station and guess what, they're all right lol. Well, I prefer the gut feeling today because it's not just me who's thinking the exact same thing and add it to the indecisive answer's from the expert's who's been scrambling to explain themselves. Initially it was just a case of explaining the phenomena to the public but now they've (expert's) have got to explain themselves and yes they are scrambling to do so. 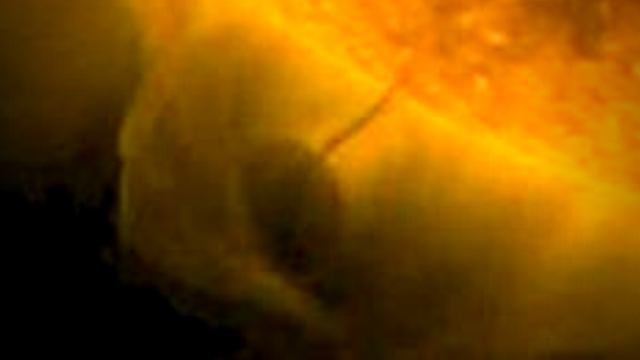 They are saying publicly that it’s a solar “prominence” or “filament” – a feature extending out from the sun which forms over the course of a day, and can extend hundreds of thousands of miles into space.

But, when pressed to explain a solar “prominence” – they can’t.

G. Thomas Elder a solar astrophysicist at NASA’s Goddard Space Flight Centre said off-the-record, ‘Filaments appear to be dark because they’re cooler in relation to what’s in the background. Scientists can not explain it. Death Star expert, Chad Rigaux, of the United Nations. said, “any explanations about the Death Star are just fabrications to cover-up the truth.”

Seriously I kid you not, check out this quote via the Express online about what technology theorist Dr Mike Capps said:

Technology theorist Dr Mike Capps added: “It’s not insane, there is a material that you can use to build a Death Star, that can grow right into a star and refuel, it’s just a matter of being able to withstand the heat.”

I absolutely respect the scientific community, the advances in technology, medicine and obviously science is incalculable as far as the good it has done for humanity, it's beyond anything that word's can describe. Because it's something that we can't live without, we must respect what theories and opinions scientific expert's have and put forward. But here's where it can unravel and have it's look tarnished.

It's when "in the name of science, theories and opinions" are peddled by Dr's and scientist's, also people who claim to understand what it is we are looking at and they make it out that they know everything about something like this Death Star, yet it's clearly a brand new phenomena unknown to science. Even right now, this phenomena isn't fully understood and that's why they still to this day say that they can't rule out that this could be a UFO refuelling.

We are allowed to have our own thoughts and opinions you know, and I get it that it's easier to be told the answers I totally get it! I realized that if I keep on letting so-called expert's tell me the answers because it's easier then I'm gonna be easily manipulated by them and if it's not true, well I'm just peddling lies. 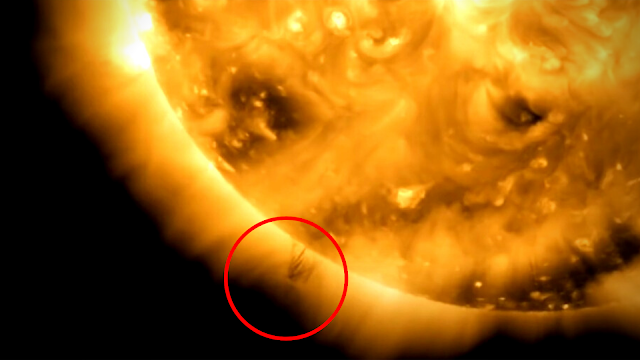 Having an opinion for myself and going with it based on research and evidence plus facts is awesome. We don't have to wait for it to be explained to us no more, because we're all the same. We all have the same capabilities just as the next person. These scientist's put their socks and shoes on, one at a time just like you and me. It's great to have an opinion on something, anything for that matter and later it's verified or the same conclusion as an expert!

Here's a quote from the Universe Today:

While our ancestors have been around for about six million years, the modern form of humans only evolved about 200,000 years ago. Civilization as we know it is only about 6,000 years old, and industrialization started in the earnest only in the 1800s.

So basically guy's, that means that while we're all evolving or only 6,000 yeats old as a civilization, we only started to leave our home planet Earth just a few decades ago. The first person to travel into space only happened just within the last 5 years!

My point is this, yes I believe that Extraterrestrials exist. But I also believe that their own timeline is a lot and I mean a lot older than ours. I believe that their technology is far ahead of our own. We only need to look at the Tic Tac UFOs or UAPs to know that they have the capabilities to exist in the Infrared part of the spectrum. The 3 UAP videos look like they was filmed in black and white, but no it's not true.

The 3 UAP videos was actually filmed using a Flir camera. Flir stands for Forward Looking Infrared cameras or Flir for short. In other words guy's, the Tic Tac UFOs cannot be seen in the visual part of the spectrum and not a lot of people know about this. So either these Aliens that made these craft's exist only in the Infrared part of the spectrum, or their own crafts (the Tic Tac UFOs) have a very good stealth capability.

It's probably utilizing some unknown technology either on the outside of the crafts painted on the skin of the craft or it it's absorption of light and output (reflection) is converted instantly which acts as a propulsion system also. It definitely uses something to propel itself in any direction "through the Infrared light." Does it bring the fuel to itself by utilizing the different light which is in abundance because I've thought this for a while! Something so small, where's all the energy coming from? Maybe it's utilizing something that's all around it, like light because air isnt 8n space but light is.

Here's the stunning, all encompassing massive UFO video which is the size of Jupiter and the video was uploaded to YouTube by the Science Channel:

Seriously if you know someone who would appreciate this post, please can you share it with them, thank you. Also I'd really appreciate it as well if you could share your own thoughts and opinions with us on this post below in the comments section, cheers.