UFO Comes Up To SpaceX Rocket And Turns Away

This UFO flies in space towards the SpaceX rocket and turned away from it like it was on a rail. It carried out an impossible maneuver all on video.

There's alway's something happening in space and to do with these early spaceflight's involving UFOs.

This UFO encounter happened in space and it's carried out an impossible manoeuvre which would have undoubtedly have killed any human. 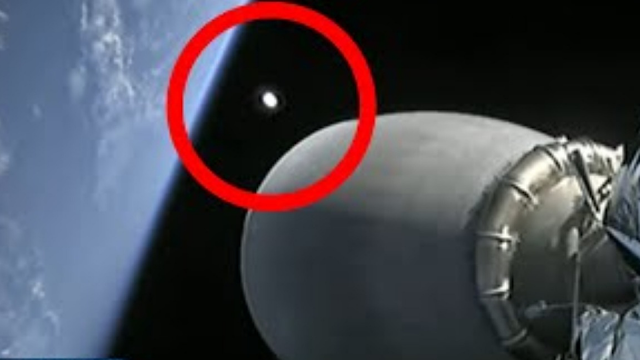 Credit: SpaceX/NASA/UFO Sightings Footage/UFO News/Metro/Canva.
This is no average UFO incident caught on camera, this is evidence of intelligent beings making intelligent decisions based on the information it's got immediately around itself. I'm satisfied that the UFO is real and it's not CGI or something else of that nature, check this out.
SpaceX is not immune from the UFO interests because we've seen many incidents happen over the years involving SpaceX rockets. One of the most controversial UFO incidents I think that has ever happened was the one where Elon Musk tweeted that it can't be ruled out that a UFO blew up a SpaceX rocket. It might even be the exact same UFO (which blew up the SpaceX rocket while it was just on the tarmac of Cape Canaveral) that we see in this astonishing UFO video right here in this post?
Related post
UFO Act of Aggression on Live TV (UFO blows up SpaceX Rocket)
That would of caused an international incident had it been that Aliens was publicly known and known to be working with humans. I say "international incident", but it's actually more like a universal incident because if an illegal Alien was to be found out blowing up a human asset on human soil then I'm sure that would of been seen as an act of aggression! Unless a secret deal was struck were being SpaceX got access to top secret Alien technology in it's original state and not the stuff NASA throws out as unrecoverable or beyond salvageable because of destructive exploratory work...
They want top tier stuff! And they've more than likely got it.
Anyway, back to reality lol. SpaceX is, as you know leading the space race now against all the other companies and other countries come to think about it. It's just the way it is, that's not me exaggerating or waxing lyrical in a way that massages SpaceX' ego. NASA's gonna be using them to take pizzas to the ISS and obviously meet with ET representatives lol. It's cheaper to rent SpaceX than fund a huge and I mean enormous bill for the "use once" rockets at NASA. It just makes good business sense.

Quote:
Here's one: NASA saved at least $548 million, and perhaps more, thanks to just one contract with Elon Musk's SpaceX. Last week, the US space agency tapped the company's Falcon Heavy rocket to launch a space probe to one of Jupiter's moons, Europa, in 2024.

Seriously, NASA saved how much money? And why the hell can SpaceX save NASA all that money? Was NASA billing for the air the astronauts breathed? Was NASA billing the taxpayer for a Newspaper delivery in space or for catching an Uber to the Moon and back! 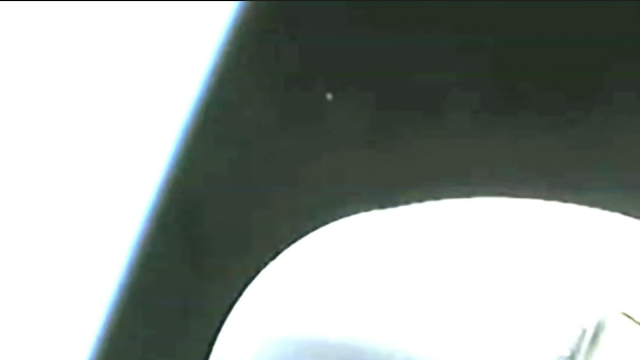 Credit: SpaceX/NASA/UFO Sightings Footage/UFO News/Metro/Canva.
Seriously though what the heck has SpaceX saved NASA money on, this I'd love to know as much as I can because we're not talking about a little saving, we're talking about a saving of the equivalent to the GDP (Gross Domestic Product) of an entire country called Dominica which by the way is 533 Billion Dollars and this is just behind the country of Samoa which comes in at 752 Billion Dollars.

Let's not forget that SpaceX has saved NASA money on JUST ONE CONTRACT! It's really hard to get a mind around just how much money that is and why it only saves NASA that much, that means it used to be even more than that!

I'm in shock because guy's, let's just say for arguments sake that SpaceX could of saved NASA money from 1969 just one day after stepping onto the Moon then yep, that's a number only God knows. It's probably a number which you or I wouldn't like to know if I'm being honest because it's not lost on me just what good that money saved could have done. 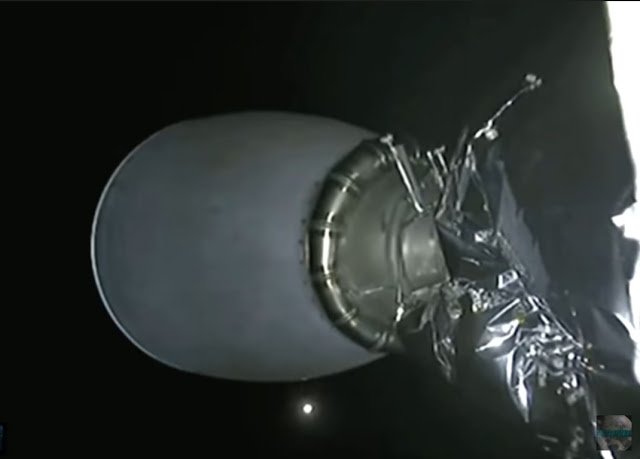 Another UFO appears directly below the SpaceX rocket and SpaceX has it filmed different angles. This is a SpaceX rocket that really interests UFOs for some unknown reasons but I'm sure it will all be revealed in the near future... 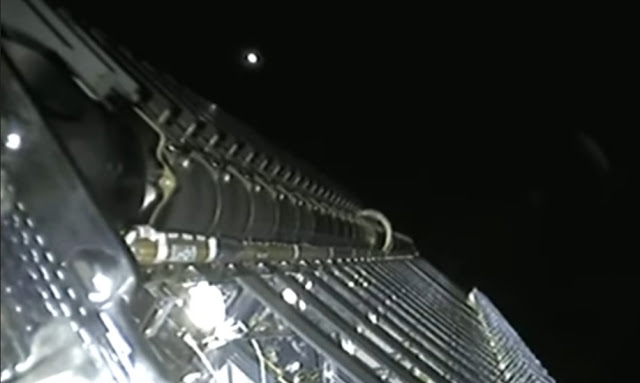 Credit: SpaceX/NASA/UFO Sightings Footage/UFO News/Metro/Canva.
But anyway, like I said earlier, let's try and get back to reality... It's gonna be absolute carnage inside of the UFO that flew to the SpaceX rocket and turned away! If whatever is inside it hasn't got inertia dampners or if it's not using some kind of fake suppression system then it's a tin of soup literally because let's have no doubts here, that UFO is travelling faster than the ISS which is travelling at 17,500 miles per hour. That's the faster than the fastest bullets ever made by mankind. So imagine turning at that speed doing a full reverse turn, that's either gonna crush anyone inside it or it's more than likely going to turn the occupants into a soup broth.
Why oh why does the overseeing people that constmonitor the live feeds alway's turn off the cameras with some phantom 👻 technical issue? They've seemed to have inherited that stupid process from NASA, so yeah. Actually step down guy's, I've just realised that SpaceX has done the same deal with the powers that be whi insist on cutting the live TV feed when a UFO is coming into view.
Oh crap, "why, oh why" have they (SpaceX) maybe done a deal with the Devil. If it barks like a Dog, if it looks like a Dog and it smells like a Dog. Then it's a Dog, right!
SpaceX turning off the live feed when a UFO comes into view isn't that exactly not what NASA did, correct? So, it would seem like the Pig that we used to call NASA has gotten through to SpaceX and the "Pig in a wig" with lipstick on, is also called SpaceX now, but it's actually NASA in disguise.
Right, did you get that? Lol. The video is a tell all really of Alien vehicles in space operating near to our human interests like the Moon, our atmosphere and oh yeah and our Planet. Is this acceptable to you, is this a known issue at NASA and now SpaceX? Guy's, the object that comes into view is not debris being blown backwards by the rocket thruster at all. Even if it was, it's still a UFO sighting in space right but that's a UFO? And another thing, the object did not fall off the SpaceX rocket because the UFO came towards the rocket from it's total opposite direction. If it did fall off the SpaceX rocket, it's in space so it would have just sat right next to where it fell off, right? There's no forces to propel the now "itty bitty space debris."
I absolutely love UFOs and Ufology, but Alien's need to come forward though - don't you think so? Skulking around at the back of the room so-to-speak but in our atmosphere and above people's homes etc is not a nice part of anyone's character let alone an unknown Alien species! It usually means that if someone's skulking around then they're either A. up to no bloody good or B. they're straight up stealing women's knickers? But either way it's not good!
I wanna see what these Aliens look like. I wanna see what their UFOs look like on the inside and I wanna fly one. Like for real, give me the key's, move over or out the way and which one of these doohicky's is go? I'll figure out the brake.
Here's the full Thirdphaseofmoon YouTube video:
Please share your thought's and opinions also any ideas that you might have about this SpaceX rocket UFO incident that seems to fly upto the SpaceX rocket and then it turns so sharp that if a human was in there then it'd probably be liquefied upon impact during the massive G-force turn.
Also if you think that you know someone, anyone that you might want to send this post to because they could shed some light on this UFO encounter then please by all means you can definitely go ahead and do that, cheers.
Credit: SpaceX/NASA/UFO Sightings Footage/UFO News/Metro/Canva.