After seeing these 3 cameras catch a trio or 3 UFOs in the shape 9f a triangle speeding past the ISS, I'm more of a UFO believer now than ever before.

Holy wow, I'm not even lying when I say that this is bar none, thee single best "3 camera trilogy UFO sighting" that I've ever seen, ever!

Did I say bar none, well then I'm saying it again. Go ahead and watch the video, I'll wait here for you but come back and finish reading me. You'll absolutely love this video because it's like nothing you've seen before. It's epic UFO footage. 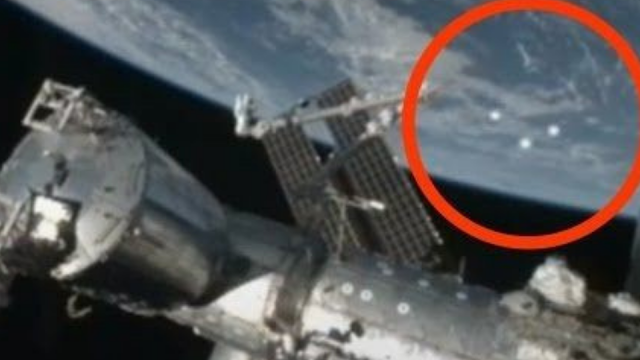 Credit: NASA/DarkBrain YouTube Video/UFO Sightings Footage/UFO News/Canva.
I'm more than speechless, I'm gobsmacked with proper astonishment. This has just cemented it for me that UFOs in space (Alien UFOs) are not only real, but are now a fact in my mind! I've made the decision on all the pieces of the jigsaw that I've been seeing over decades and now this one UFO sighting has literally put it over the edge. Okay I was already a UFO convert but now coupled with this video information, I'm not only a convert from before but now I'm hook, line and sinker convinced.
Here's my article:
The ISS (or International Space Station - which is what it stand's for) got such a huge surprise when a 3 pointed triangle formation UFOs flew past the 3 different cameras on the outside of the station. They were caught on camera like never before, in a trilogy of camera goodness. 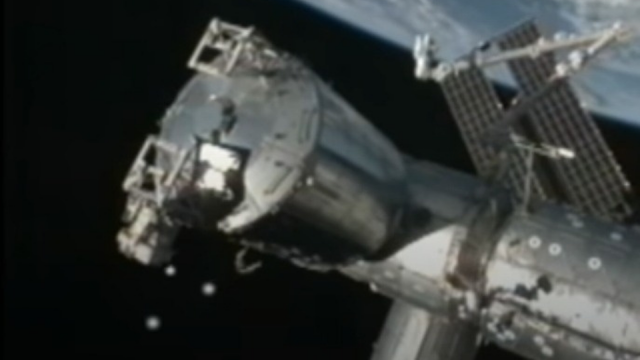 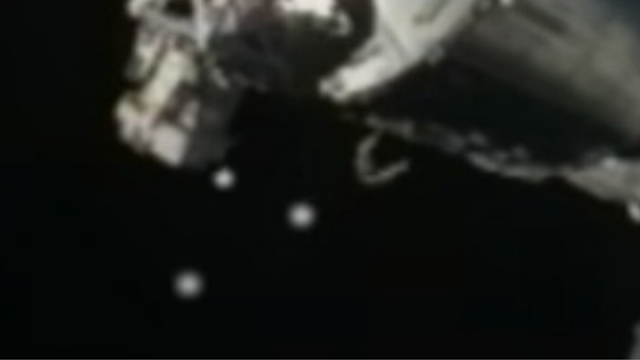 Credit: NASA/DarkBrain YouTube Video/UFO Sightings Footage/UFO News/Canva.
That's unacceptable, that's so unacceptable that it sounds like a bad movie plot where the poor silly Earthling's didn't even stand a chance. What's the name of the little fury Bear type creatures from Star Wars? Ewoks, that's their name. Well, I feel like an Ewok using a stone slingshot. 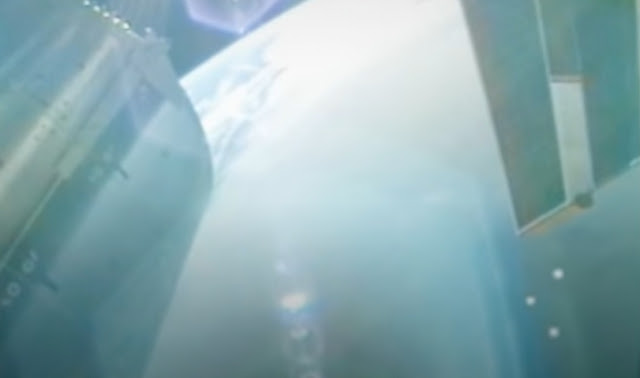 Credit: NASA/DarkBrain YouTube Video/UFO Sightings Footage/UFO News/Canva.
Date of ISS UFO sighting:
03/04/2013
03:57hrs
The 3 pointed Orb "spear like formation" must of been speeding together in synchronisation like there's no tomorrow as even the ISS is travelling at 17,500 miles per hour which is faster than any speeding bullets ever made! Which, when you think about it even the fastest bullets only travel at 1800 miles per hour, the ISS is shockingly fast.

That means that these three UFOs (Unidentified Flying Objects) are gunning it as if they're lives depended on it.

If the ISS was subject to the same Earth conditions like drag, gravity, aerodynamics and etc these poor astronauts would be looking like noodles in a tin of soup. So yeah, it's safe to say that this formation of UFOs could very well be some of the fastest UFOs that we've ever seen on camera and even in space? It wouldn't surprise me one bit but where are they going in such a rush?
Related post
Helicopter Circling 3 UFO Spheres Downtown in Public
What's their agenda, what's the end goal if at all they even have one? Or is it humans in the top secret space fleet in some as yet to be disclosed space crafts? Seriously, I honestly don't know what to think in this day and age because one thing that I do know well is that anything is possible.
Human technology is at its most sophisticated that it's ever been! I know it's an obvious thing to say "in real time and right now" but when it's said in 2021, this year, you know that it's got clout and you know it's got lot's of unbelievable advanced, technological marvels and inventions to back it up and that's just what's in the public domain. Everyone coming out of hibernation so-to-speak and have been working from home are bringing do much stuff with them. Having all that time on your hands at home so you can finish that project off is now been put to the test.
Like I said, 2021 is where it's at in terms of technology leaps and marvellous new technologies, software, apps, gadgets, physics defying materials including space age stealth technology etc because everyone finished their projects while on lock down. Heck people had near enough 2 yrs to finish their "in the pipeline projects". And yes, believe me a huge number of people finished them and defied a lot of beliefs. Lot's of people are just "that good"!
What I like about this is that the UFOs are tracked from one camera to the next camera and then we're supposed to believe that it's gone out of sight to the left, we all know cameras move and the ISS has cameras facing in every direction so you can bet your life that the camera operator's know exactly where this formation went?
Here's the full YouTube video that was uploaded by Darkbrain
Please share your thought's and opinions also any ideas that you might have about this triangle shaped UFO formation of three crafts travelling faster than the ISS. C'mon I know that you guy's have some constructive comments because your alway's leaving excellent comments on post's with some constructive feedback. The marvellous entities in this video must strike you as different, stunning or it might even remind you of a UFO sighting that you had maybe? Or it might remind you of another similar UFO trio that was caught on camera?
If we can link these UFOs to another possible UFO Sighting then that would be great, it doesn't matter if we don't have immediate clarification or confirmation that this UFO sighting matches another but if we can make some similar connections then that's absolutely worth it.
Credit: NASA/DarkBrain YouTube Video/UFO Sightings Footage/UFO News/Canva.