If this UFO Orb Motherships real then it's definitely deploying something into our atmosphere and that's gotta be a bad thing, right? Check this out.

I'm shocked looking at this UFO Orb Mothership because it's literally giving birth to another smaller UFO Orb and I wasn't really expecting it.

To be honest that's exactly what we're seeing here is a UFO Orb Mothership deploy a smaller Orb and to be honest I don't know what I was expecting but 2 UFOs for the price of one must good, right. I did think that the smaller UFO Orb was suspended under the larger UFO with a string - but nope, it's definitely moving independently from the Mothership which was moving from the middle and directly underneath the bigger UFO. Then it went to the left hand side (looking at it) of the bigger one. If it needs string to dangle underneath it, then there's just no way it can do that as far as Iknow? So, because of that impossibility, to me it's a genuinely real UFO incident. I'll put my money where my mouth is on this UFO video as I think I've determined the correct answer? I do understand though that there could be another altogether different answer because there are no facts, yet about this. 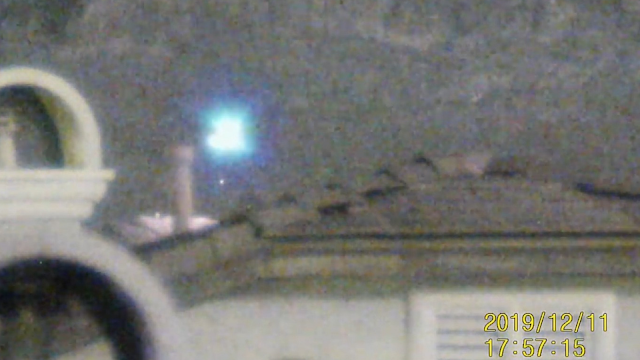 Credit: Steve Barone YouTube video/UFO Sightings Footage/UFO News/Canva.
I'm not saying that I'm disappointed with that titbit of knowledge but I'd be lying if I said I really didn't believe it was a glowing UFO Orb video. The truth is that as soon as I saw the glowing UFO I thought that's a fake. But as it turns out guy's it's really looking as straight as a dye. I'm looking into the finer details of this and they seem to be adding up. For instance there's no tell tale CGI, copy and paste blurring around the UFOs edges. And for another thing, his neighbours will have to be in on the hoax and okay whilst it could happen - what's the chances of that and what's there to gain by creating a stupid UFO hoax?
And for another thing, some people seem to be able to know when UFOs will be around in the sky? Seriously, I looked onto this and there's people who have invited mainstream media to witness these UFOs turn up when they summon them and low and behold, they turned up. Also, did you see the episode of Skinwalker Ranch when the multiple UFOs turned up in intervals? That was sic UFO encounters and they caught it all on live TV recording as they went.
Related post
The Strangest Incident Happened Over Berlin, Germany on June 1st 2021
I'd be happier or more content should I say if there was more of the video you know, like a beginning and an end. It seems like we've just been given the money shot and we've got no couch and wine scenes or the walk of shame in the morning so-to-speak lol. But the money shot is good, I suppose... Please keep on track 😉. If your familiar with this YouTube channel then you'll already know that it's channel dedicated to Las Vegas UFO sighting's and to be honest I wouldn't have ever thought that one city is capable of providing that many UFOs with enough to create a dedicate YouTube channel.

It's filmed from the eye witnesses own home and though there's no way to know how he knew it was there in the first place because we don't have the full video but I'm sure one day we'll maybe know...

Anyhow, getting back to the UFO doohicky (yes it feels right with two letter o's) it's glowing but what's powering it or creating this energy? The energy that's given off from this thing especially changing colour means that there's intelligence to it. 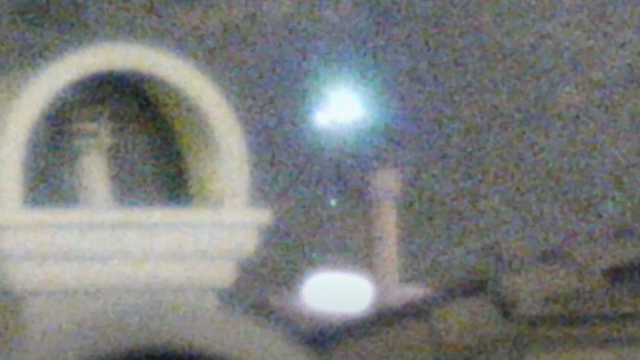 Credit: Steve Barone YouTube video/UFO Sightings Footage/UFO News/Canva.
Just having a smaller Orb coming out of it would suggest it's intelligent also. The reason for this deployment of another UFO besides itself is either because it's taking a sample of air or it's deploying something into our atmosphere and the more you start to think about it and start going down that road, it starts to get a bit weird and unnerving.

I say unnerving because it brings me back to the fundamental question: Why are UFOs here? They're evading humans, so that's unnerving, they take chases from the US Air Force and yes, that's most unnerving.

How would you describe this Las Vegas UFO encounter or UFO sighting, which I suppose is more accurate?
The witness (Steve Barone) is saying that there is definitely a shape to it other than an Orb but I don't know about that? The orange shape on the black background is supposedly the UFO and the Orb - but the image has been put through a filter which is (I'm assuming) taking the strongest energy points in the picture taken from the video? The strongest energy points coming from the object can be filtered and hence that is giving us a strong silhouette shape which to distinguish it from the background it's separated as an orange colour which is most certainly not a sphere according to this image.
Let's assume (once again) that this is a true representation of the UFO and that this silhouette outline is correct then I'm actually more confused now than before. I'm totally out 9f opinions as to what can make that shape especially as it's a UFO shape. If you guy's have any ideas as to what it can be then please leave a comment because it's lost on me!
Here's the full YouTube video description:

I shot this video from my backyard in the Summerlin area of Las Vegas, Nevada on the night of Wednesday, December 11, 2019. This is a short teaser as to some of what you will see in the full-length video. Tonight was the first time ever that I had a sudden urge to hurry up and get outside with my camera. I don't know if it was the full moon or what but I walked right into this. When I saw the little probes coming out of the UFO and then returning I knew I probably had my best video ever. Please watch this because it's short so that you can see that the full-length video is going to be incredible.
Steve Barone YouTube

I've got to admit that I've never known of anyone to get a feeling to specifically grab a camera and run out the back door, not the front door and there be a UFO pretty much waiting for them? And it clearly did nothing but hover really close to the rooftop of his neighbours house... I'll be honest, it looks suspicious.
Here's the full YouTube video from the Steve Barone Channel:
Please share your thought's and opinions also any ideas that you might have about this unbelievable and different UFO Orb and I suppose Mothership UFO sighting. If you know anyone who you think would appreciate it please share this post, cheers.
Ps here's the link to the full YouTube video by Steve Barone.
Credit: Steve Barone YouTube video/UFO Sightings Footage/UFO News/Canva.