A couple from South London filmed 5 Doughnut shaped UFOs out of their family home window. These are real UFOs and not drones at all seen over London.

Sometimes we don't have control over what we see in public at the best of times but in this case in particular, it seems like seeing "five UFOs together" all at once was the last thing anyone in this family was prepared for.

UFOs are being seen elsewhere in the world, but seeing 5 UFOs all at once in the same place is mind blowing...
Related post
Incredible Footage of Many Doughnut Shaped UFOs
Seriously guy's, this is probably one of the best documented UFO sighting's and witnessed by multiple eye witness accounts so far of 2021? We've got an amazing bit of Ufology history being made here and I'll be hard pushed to hear anyone say that these are drones. The logistics alone to bring 5 UFOs together (it wouldn't take a lot) actually in my view just doesn't stack up. There's ways to much involved in 5 drones been coordinated together and lazy fakers like CGI  which this is most easiest way to hoax UFOs of which this UFO video is certainly not CGI. 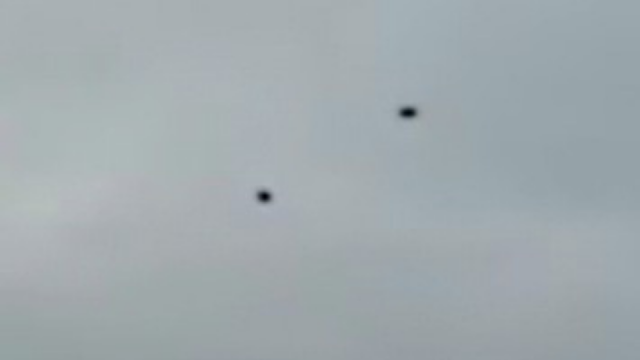 Credit: Daily Mail Online/Daily Mail YouTube Video/UFO Sightings Footage/UFO News/Canva.
But, luckily for us though we have a couple willing to stand their ground and they filmed the lot from the couple's window in their home! To be honest it sound's like the woman is shaken up a bit (which is totally understandable) the beginning of the video.
Credit: Daily Mail Online/Daily Mail YouTube Video/UFO Sightings Footage/UFO News/Canva.
5 UFOs turning up near your home and hovering around plus flying around in an almost dance routine is definitely enough to get anyone else on edge. Even though she was shaken up by their presence at the beginning she can be clearlyheard asking if they are drones? I don't know if it's a rhetorical question or if it's just purely speculation? The woman can be heard saying:
We saw one the other day, no word of a lie!
So, I take it that this us a hotspot because the Veryan definition is a lot of UFOs in the same area within days. Therefore, if this is 5 UFOs on one day and another a couple of days before that turned up, that's 6 UFOs in the space of 3 days, I'd definitely put that down as a "UFO hotspot" wouldn't you?
Quoted description text:
This is the moment a stunned family spotted five mysterious UFOs flying above the south London skyline. Mark Banks, 38, was at his girlfriend Vicky Andrews's home near the A2 in Welling with his daughter Aimee, 13, when Vicky spotted the donut-shaped objects out of the window. They filmed the five objects, which were round with a hole in the middle, hovering in the sky in the Sidcup area at 6.40pm yesterday. Mark, a postman, said they watched the objects for around 10 minutes, although they might have been there longer.
Here's the extraordinary YouTube video of the whole South London multiple UFO incident and guy's, even though the lady is asking if they are drones, remember that drones do not come in cherry doughnut shapes!
Guy's I'd really appreciate it if you can share this post but also if you can share your thoughts and ideas on just what we might be looking at here, remember that there's apparently 5 Doughnut shaped UFOs in this area over South London, cheers.
Credit: Daily Mail Online/Daily Mail YouTube Video/UFO Sightings Footage/UFO News/Canva.