NASA expects the world to believe that they've just accidentally discovered a warp drive which will one day give us warp speed. It's improbable stuff.

NASA has accidentally created a warp drive bubble for interstellar travel, which is gonna help aid us in warp speed but that to me sounds suspicious.

For one thing it's just to fantastical news that it sounds like an April fools joke and you know it does, right. This ia what science fiction works on, not reality... On another note it's the perfect excuse when your given the technology by Extraterrestrials isn't it? If these ET's have swapped it or just straight up given us it and by us I mean DARPA and NASA and their cohorts, the best way to pass it off as a human discovery is to do so by coming out and just saying "oh, we just accidentally found it" yeah right it was an accident. That's the first thing anyone says when they've been caught stealing something or they have something that they can't explain - legally, lol.
So, what exactly is a warp drive? Let's get some perspective of just what has been announced by getting a briefing from Wikipedia?

A warp drive or a drive enabling space warp is a fictional superluminal spacecraft propulsion system in many science fiction works, most notably Star Trek, and a subject of ongoing physics research. The general concept of "warp drive" was introduced by John W. Campbell in his 1957 novel Islands of Space and was popularized by the Star Trek series. It's based on the Alcubierre drive, a theoretical solution of the field equations of the General theory of relativity.

Now you can understand why I'm grappling with what has been announced, right? It's absolutely monumental and so groundbreaking that this is off the charts. But what puts this over the edge is that NASA and DARPA wants the public to believe that they accidentally discovered it? And it's this that I just can't accept and here's why... 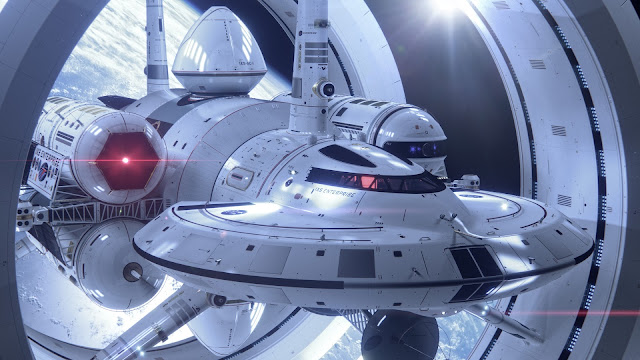 Above is Mark Rademaker IXS Enterprise ready for departure which is using a concept Warp Drive.
Credit: Coffeeordie/Wikipedia/DARPA/NASA/UFO Sightings Footage/Artstation/UFO News/Mark Rademaker Image/Canva.
Because usually, doesn't the math's and the software models and equations usually get published first which proves it in theory and then they put what they've learnt through that into practice? But it seems like they've brought the whole math's, the equations, the software, the theory etc out at the same time as the experiment that has the "accidental discovery?" Like I say, my understanding of warp drives is very limited and yeah there will be plenty of people screaming saying "you know nothing" yadda yadda yadda. But this is a warp drive, made famous by sci-fi movies which we now have by accident. And that's about as insane as anything gets. NASA want us to believe they accidentally discovered how warp speed drives work because they've accidentally recreated it.
Related post
Here It Is, Scientists Tested White Hair For DNA And Finally Prove Extraterrestrial Being's Are Visiting Earth
Now, I  may not know much about warp drives lol, but I can detect a fib at 50 paces. 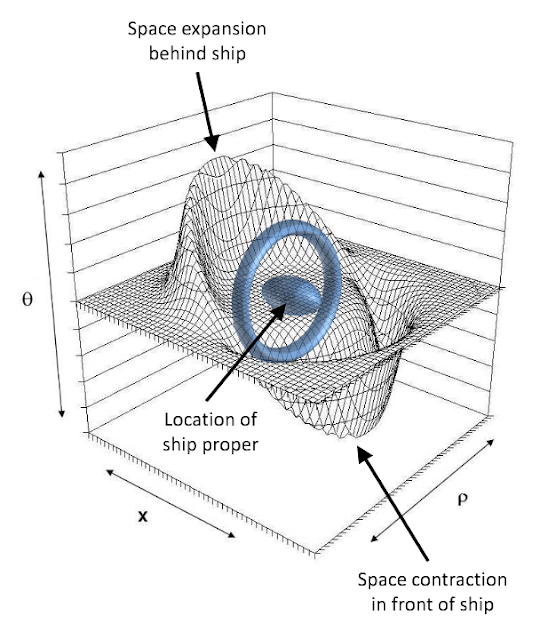 Credit: Medium Tim Anderson Ph.D./Coffeeordie/Wikipedia/DARPA/NASA/UFO Sightings Footage/Artstation/UFO News/Mark Rademaker Image/Canva.
Come on give me the biggest break that you've ever given anyone in your life! So let's put this one into perspective, were supposed to believe hook line and sinker, without question that NASA is creating new inventions using a diabolical tinkering method, probably causing accidents that have hone unreported and enjoying the benefits? That's about as insane as it gets as they don't have full control over it? The energy involved is astounding, the engineering is planned and fully understood yet this "happy accident" is still happening. And we're supposed to believe that madelling beforehand in software gets it wrong?
Related post
UFO sphere sighting in Russia over water
I don't know what to believe anymore because on the one hand NASA brags that it has the best, brightest people and the most sophisticated technologies and software etc that exists anywhere on this planet and yet probably the single most important discovery came about by accident?
Quick quote:

A Defense Advanced Research Projects Agency-funded research project at NASA’s Johnson Space Center may have accidentally discovered how to build a warp drive engine. The scientists published their findings in July.
Harold “Sonny” White, a NASA researcher at the Eagleworks Laboratory in Houston, Texas, published a research paper with his team in July about the “possible structure of the energy density present in a Casimir cavity.”
According to the report, the Eagleworks team came across “a micro/nano-scale structure … that predicts negative energy density distribution that closely matches requirements for the Alcubierre metric.”

I can only explain this in my Caveman-like understanding because my understanding is very limited (like the majority of the people on the planet) even though I can't go further than that, I can certainly help explain the basic and most obvious inconsistencies that NASA keeps on displaying time and time again.
Some of the most advanced technologies and inventions that have ever happened have come about by accident, or basically we just found it one day?

"I came to work in the morning, I put a few scraps of metal together, then we sprinkled some sawdust on it, we all said a few words backwards, just like on a record player but it playing backwards and the next thing we all knew, we'd just invented a lovely warp speed drive bubble".

It's absurd, especially when we apply it to warp bubbles for Heaven's sake which eill be used in space travel? Yeah right, pull the other one it plays a tune! It doesn't matter if it's microscopic or something else entirely, the fact that warp drive bubbles have been observed by accident, entirely created unintentionally seems improbable beyond words!
Here's a perfect quote I think we can all understand in such a way like "Warp Speed" don't forget this is a staple in any sci-fi film and it's this that it brings it home and shows us just how improbable this is:

In other words, White and his colleagues accidentally created a microscopic experiment while researching how energy distributes around wavelengths — a theory developed by Dutch physicist Hendrik Casimir. The experiment resulted in enough theoretical energy to achieve “warp speed,” a concept theorized by Mexican mathematician and physicist Miguel Alcubierre.

Okay, I know that I'm been very sarcastic, I'm being naive and yes I'm writing about something that I haver very little knowledge about which is warp drives and the engineering that gets you to it, and how it's crested full stop. But I know that my understanding of warp drives is the same as probably 97% of the entire world's population so please, don't take it the wrong way. I know little and I'm giving an opinion on something which I know nothing about, but one thing I do understand is BS and it seems like I've detected something here.
Click here for our UFO YouTube Channel
Warp drives are a staple of the sci-fi film world but yet we've just accidentally discovered one? That's why I'm finding it hard to believe, especially the accidentally discovered part. They're basically saying that they've just found it - that's all I'm saying.
Sounds about right though when you think about it doesn't it.
Here's a great video uploaded by Trek Culture YouTube Channel giving us a good understanding of what's happened here regarding warp drives discovered by accident, NASA and DARPA:
Guy's here's another YouTube video uploaded by Limitless Space Institute YouTube Channel regarding this warp drive discovery:
Please share your thought's and opinions also any ideas that you might have about this amazing and exciting new accidentally discovered warp drive. I'd also appreciate it if you could share this post with someone who you think would appreciate it, cheers.
Credit: Limitless Space Institute YouTube Channel - Medium Tim Anderson Ph.D./Coffeeordie/Wikipedia/DARPA/NASA/UFO Sightings Footage/Artstation/UFO News/Mark Rademaker Image/Canva.