UFO Appears Right Next To ISS From Nowhere

When a real UFO sighting happens at the ISS you'd think the newspapers or the news channels would all be told to turn their TV on but no, nothing.

Those people who say that UFOs are not real or that the ISS doesn't have UFOs visiting it and that all UFOs can be explained as natural Phenomena, these are UFO deniers because all you have to do is check out this UFO encounter at the ISS.

This UFO is massive and I can't stress that enough to you, it's been described as if it's towering over the Earth like a Darth Vader Death Star or some strange space penthouse with a balcony where you can just gaze out over the Earth. 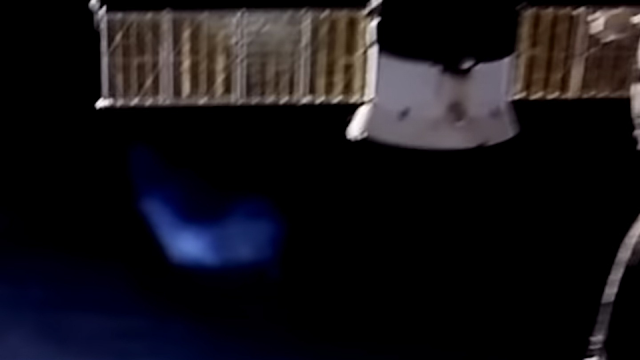 You'd think that when a UFO turns up at the International Space Station all the major news TV channels would contacted and that yhese channels would all give it live coverage? But absolutely nothing is done! Instead the folks at NASA have their military orders to cut the live feed and put up a screen saying we're experiencing technical difficulties. But isn't this "technical difficulties" sign a TV signal being broadcast... I think you'll find it's a cover up or at the very least it's collusion.

That's how big this thing is. It is a blue - ish colour which literally just starts to appear out of nothing. It's a gradual event which sees the blue like object just start to appear from nowhere with what can only be described as a plasma like gas surrounding this thing? It's shape is like a half Moon or crescent shape if you will and it has hard lines to it not just a curve. NASA's curious nature never seems to be coming forth, they're never quick to even want to look at these thousands and thousands of UFOs either. They're usually passing by the ISS or the ISS cameras spots some UFOs far off but only in the peripheral of the ISS cameras because NASA never, never, ever "not once" has NASA pursue it or zoom into it or advise people to look at the object. Because it's the ISS live feed and NASA is in control of these xameras they certainly can if they wanted to, come on great live feed and advise people to look at the UFO or UFOs? Instead they cut the darned live feed every single time!

The DailyStar had this to say about the object:
In a video posted online, a mysterious object seems to appear above the planet. The glowing object - which appears blueish in hue with a white centre - can be seen in the background of NASA’s live feed. As the camera zooms in, the alarming size of it becomes clearer as it towers over the planet.

It's not just a joke, it's a straight up cover up and they're deniers of our birth rights. We humans, all humanity has a right to know if UFOs are in low Earth orbit or comingbto Earth or better still, should be told if UFOs are leaving Earth. Maybe they should stopped by something like a customs... That may sound bonkers but not long ago people was put into asylums for talking about UFOs and humans living in space etc.
In fact a prominent mainstream media newspaper had to publish an apology for attacking a person's beliefs a long time ago about humans one day going to the Moon and living in space. This newspaper had published a retraction and they even apologised and said about how it was very unfortunate that the newspaper editors at the time didn't have this guy's same wisdom, foresight and obvious grasp of where humans were headed.
So, talking about space, talking about Alien's including talking about your thought's and your opinions and where you can see humanity is in the future in say, 50 or 100 years is absolutely okay and you'll be happy to hear that there is no wrong answer.
Therefor I believe that this is friendly (maybe lol) as the ISS is still here which would suggest the meeting went well - otherwise the International Space Station would just be a memory and NASA would be telling everyone that a meteor or comet strike or even a man made accident happened? Anything but the truth, right! It's lost on me why the truth never gets told... oh yeah, after thinking about it it's because of funding, investment, public image, public confidence, shares even. I'm generalising with these few comments because NASA is a Government Agency.
Anyways guy's, if you know me and if you read my blogs often then you'll know that I can xhat for days, lol. But, thank you so much for reading my posts, cheers it means a lot.
Here's the full YouTube video uploaded by Joe Thai:
Credit: Daily Star/Joe Thai YouTube Channel/UFO Sightings Footage/UFO News/Canva.