I'm totally gobsmacked with how good this UFO sighting is. It's a fantastic UFO video. I've counted at least 30 different UFOs which aren't Bird's.

This has got to be the most UFOs anyone has ever seen or filmed actually crossing in front of the Moon and I counted 30 but it could be more or less.

Either way it's lots and lots of the UFOs (Unidentified Flying Objects) flying effortlessly past the Moon and it makes me wonder how these wasn't picked up on by any agencies on radar or satellite and telescopes even... or was they?
Some people on Instagram (which is where this was uploaded to by UFO Lovers Instagram Channel) are asking about the lack of stars next to the Moon which is an excellent question but one person actually answers this and says that he's got a 300ml lens and he can never see any stars next to the Moon when he films it. Even though it's not very scientific or factual it does answer it and if we think about it it's right. Please, read on for my reasoning and rational thinking about this. 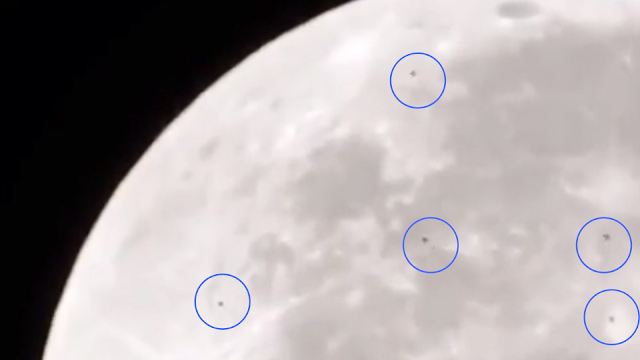 Credit: UFO Lovers Instagram/UFO Sightings Footage/UFO News/Canva.
Another guy asks "why do the objects disappear when they fly past the Moon" which is a really good question if you ask me? Going from in front of the Moon and been able to be seen clearly because the Moon is lighting up anything from behind it, we're effectively seeing the objects dark side. This why we can't see the objects when they pass from in front of the Moon and then into the dark, because space is dark, I assume that we're still seeing the dark side of the objects and it's not lighting up the objects because it's not the Sun it's the Moon. I mean this makes complete sense to me, but I'm sure someone who reads this can explain what is actually going on in the video?
Related post
Actual UFO Coming Out Of Crater In Amateur Astronomers Telescope Video
Also, there's well over 30 UFOs which are all flying in the same direction and at the same speed, I mention it because someone reckons that thesecare Birds or Bat's. I'm absolutely certain that these aren't Birds or Bat's, and I'm sure that someone could explain to us why this either isn't flying Bat's or Birds and that there's a good way to tell the difference like speed or just the way these are gracefully flying past the Moon as opposed to when Birds fly they fly erratic and they turn suddenly in mid-air and the same goes for Bat's.
Related post
Huge Fleet Of UFOs Twice Passing The ISS 2 Day's Apart

I reckon somebody somewhere had these on some sort of monitoring system what with all the massive telescopes around the world supposedly watching out for near Earth objects and what not? Because this video was reported anonymously and without any information whatsoever as to what, when and where we will just have to speculate but the best thing about this UFO incident is that it was reported and that on my book is commendable because I totally understand why UFOs and other anomalies are ignored, deleted from cameras etc is because of the obvious mistrust and distrust of UFO videos been real. Also people have been sacked from jobs, ridiculed and that type of stuff has happened with eye witnesses so no wonder people who have caught UFOs on cameras either don't report them or are hesitant to report a UFO sighting and when they do, it's done so without information because it can lead people to

working out who filmed it.
Some people on the Instagram post reckon that this is simply a flock of birds and the Moon is in the backdrop? I'm not so sure about that as the "birds" are just to graceful, there's a constant between the "UFOs" and i don't think birds can achieve this but I could be wrong?
Seriously what's your thoughts on this guys lets share this and let's try to figure this out. What could this be other than UFOs or birds? Is this a group of satellites or is this space junk? I'm running out of things that this could be other than UFOs. It's still got to be a really good anomaly because I don't think we'll ever get to the bottom of this, do you.
Here's the full awesome video about the most UFOs ever seen flying past the Moon:
Please share your thought's and opinions also any ideas that you might have about this amazing fleet of UFOs passing by the Moon. I'd also appreciate it if you could share this post with someone who you think would appreciate it, cheers.
Credit: UFO Lovers Instagram/UFO Sightings Footage/UFO News/Canva.