Astronaut Carved Onto Cathedral In Salamanca, Spain Here's The Truth

A Church Cathedral in Spain has an Oopart in the form of an Astronaut in statue on the Cathedral outside. It's a recent addition created by artist.

Hold on to your hats because we've got a real doozy for you! You know how we love any and all ancient historic anomalies here at UFO Sightings Footage yes.

We also like it when we can give a real ending to a conspiracy once and for all to our readers and followers, it's only right that as we learn so do you guys, actually it's pretty much you guys who put us right 99% of the time, lol. 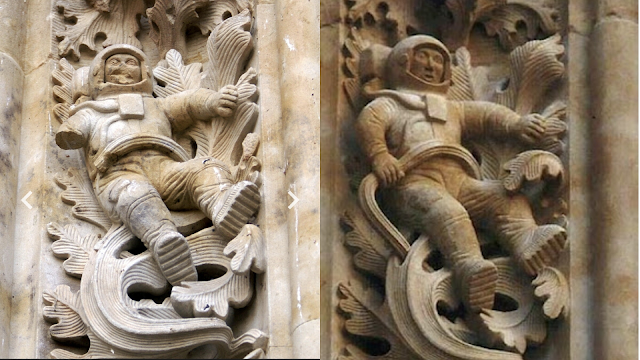 Credit: Atlas Obscura/Anomaly Info/UFO Sightings Footage/UFO News/Canva.
This is one of them times where we have found the answer to a rising and very popular cathedral conspiracy in the city of Salamanca in Spain.

Here's the legend:
In the city of Salamanca, Spain, there is a cathedral that was constructed in 1102 CE, making it one of the oldest in the world. Like many other cathedrals, the walls have been decorated with many wonderful carvings of saints, demons, and various other objects? Some are very scary and conjures up wild thoughts of strange goings-on in times gone by. Some carvings are downright freaky and bizarre and one of which is very unusual. The carving appears to be of a Gargoyle with it's pants down eating an ice cream! But there's an Oopart as well which shows an out of place artefact but from the 20th century which shouldn't be there at all and that Oopart is of an astronaut! How did it get there? Did a twelfth century stonemason artist predict the future? Is this some sort of hidden message which a lot and I mean a lot of people seem to think that this is indeed a hidden in plain sight "coded message". But, it's actually quite straightforward if you do the research...

Here's the answer:
The carving is, in fact, an astronaut. But it was added to the Spanish Cathedral way back in the year 1992 by artist and sculpture Jerónimo García, who was the man in charge of the restoration work being done to the cathedral. He also added a gargoyle eating an ice cream cone, as shown in the following picture: 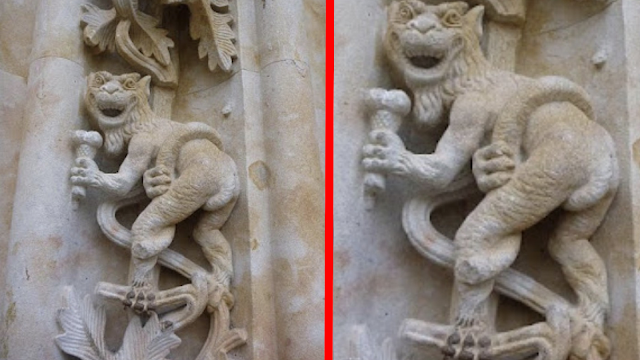 Credit: Atlas Obscura/Anomaly Info/UFO Sightings Footage/UFO News/Canva.
Related post
Ancient Discovery In Mexico Could Change Everything We Thought We Knew
The astronaut on the Cathedral of Salamanca is not in fact a hoax, but an approved and very modern addition to the Cathedral, however it has all the earmarks of something which may provide many, many people absolutely "undeniable proof" of a time travel machine, insider knowledge of the Freemasons, or proof of ancient Alien being's using Earth as a colony perhaps? But one thing that i really do know (first hand knowledge) is that without researching anything that we want to know moee about is the wrong way to getfor great confusion some 500 years from now.
Built between 1513 and 1733, the Gothic cathedral underwent restoration work in 1992. It is a generally a tradition of cathedral builders and restorers to add details or new carvings to the facade as a sort of signature.
Here's a fact check video which was uploaded by YouTube Channel Factly:
Please share your thought's and opinions also any ideas that you might have about this amazing Oopart or hidden in plain sight anomalies. Please share this post with someone who you think would appreciate it, cheers.
Credit: Atlas Obscura/Anomaly Info/UFO Sightings Footage/UFO News/Canva.