Flying Saucer watching astronaut in distance looking over the Astronauts at the Hubble Telescope. This is real UFO sighting following human activity.

To me, this is one of the best Flying Saucer photographs to be caught watching the astronauts in space just doing their jobs.

If it's not a UFO then what is it? In fact, by it's own definition it's a UFO, because we can't recognise it as anything? It's something, and that's why we're here, trying to figure it out.

These Extraterrestrial entities have put humans under surveillance for decades and this is why I am convinced about it... There's alway's something sneaking around 8n the background, always with the unusual looking crafts, alway's there one minute and gone the next. It's sneaky behaviour by something, but why are they always skulking around when they could just pull up and say, hey!

I've definitely got my own conclusion which I'm gonna go over in a minute with you. But, let's dive into this spectacular UFO sighting at The Hubble Telescope (Wikipedia). I'm so grateful that we've got a lot of real UFO sighting's to go through, the opportunity to find out the truth about the bigger picture to the universe because some countries leader's don't even let their citizens mention opposing views, let alone Alien's. So, I'm grateful that we can get to the bottom of this but do it for everyone on this planet. Credit: NASA/Secureteam10/UFO Sightings Footage/UFO News/Canva.
All the UFOs ever reported on, written about or even had films made about them, these UFOs have never had anyone or anything exit the UFO and just give us a quick bit of information as to why they're here! They've never so much as stopped and said "don't mind us, we're just here watching you to learn about your culture". UFOs never have, probably never will stop and introduce themselves and they've not had the courtesy to inform anyone at the International Space Station about why they've been constantly watching humans at every single milestone and at every turn. I mean, it would be nice wouldn't it.
Milestones.
Every single milestone, and I mean absolutely every single milestone right, anyways about that... No matter what we've achieved in relation to the space station, to the Hubble Telescope, to the sending sending out of the amazing satellite probes to planet's just like the Mars Orbiter and everything in between - there they are, UFOs everywhere.
UFOs have stalked Humanity for decades, what else would you call all the UFO sighting's collectively in and around this planet for decades if not centuries?
Seriously what else would you call it? What else are we "the public" supposed to ignore this constant anomalous activity and just pretend like we don't see anything? That's never gonna happen. And yes, it actually does go back centuries. How else do we explain thing's like this: 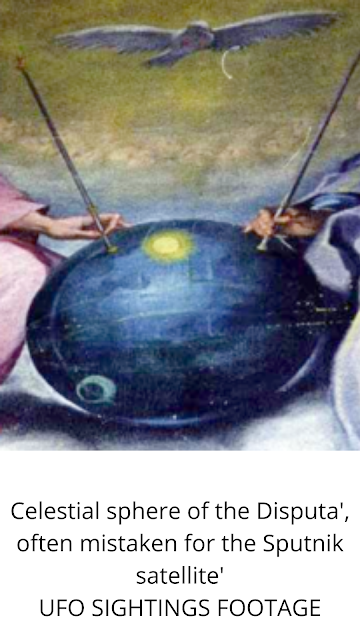 Credit: Wikipedia Ventura Salembini circa 1600, Glorification of the Eucharist/UFO Sightings Footage/Canva.
Related post
NASA Live Stream UFO Filmed From Different Angles
It is exactly what it is, that's either "deep insider knowledge" of the future depicting Sputnik or it's a depiction of a UFO from that era because that's 2 aerial antennas on the sphere - but it's the year 1600 and pleaseI ask you, how can we ignore something with antennas from the year 1600! That's why when I see UFOs like this one at the Hubble Telescope, it's the same picture just a different century because it's depicting a UFO.

Humans have been stalked by Extraterrestrial entities operating on Earth since way, way back in history. That stunning piece of artwork above, that's your unmistakable proof because that artist had nothing around him to base that artwork on, or did he?

UFOs are in space and following (maybe UFOs was already on Mars) following our satellites into space. The evidence is there, unless the videos and photos are made by hoaxers and fakers on Earth? If so then what I've said isn't valid but until then, the evidence shows UFOs. 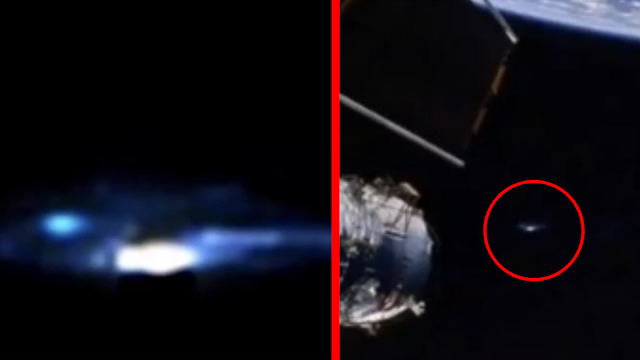 Credit: NASA/Secureteam10/UFO Sightings Footage/UFO News/Canva.
Humans have achieved a lot with space travel, space colonisation and sending deep space satellites out on mission's. Alien spacecrafts have been right there like they was just watching thing's unfold like a spectator if you will? I'm been serious, everything from landing on the Moon to Flying around the Earth and putting satellites in space to flying in low Earth orbit. There they are, UFOs are everywhere. On Mars we can see them in UFOs, we see real tangible anomalies have plagued us every step of the way and nobody at NASA finds this interesting... 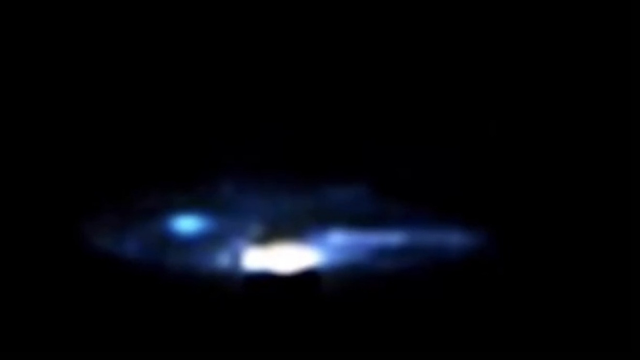 Credit: NASA/Secureteam10/UFO Sightings Footage/UFO News/Canva.
That's not only my reasoning because then there's the classic "watch but don't interact scenario" which is a trait of a spy!" Call me paranoid about describing the things that we see and report as UFOs but it's a very rational way of thinking because all I'm doing is describing what I am actually seeing in the videos and I'm not adding any interpretation to it.
Related post
UFO Changing Shape Over Nellis Air Force Base Including Audio
Quoting Astronauts when they talk about UFOs and what they actually saw in space is reporting on UFOs. And showing UFOs in any ISS video or other mission's in space videos and other UFOs constantly turning up around the Astronauts is presenting the evidence. I'm in no way being paranoid and that is a big difference between my interpretation of what I think is going on and what is actually going on in the videos.
Here's the full awesome video uploaded to YouTube by UFO News:
Please share your thought's and opinions also any ideas that you might have about this amazing UFO sighting filmed right behind the Hubble Telescope watching the astronauts there. I'd also appreciate it if you could share this post with someone who you think would appreciate it, cheers.
Credit: NASA/Hubble Telescope/Wikipedia/Secureteam10/UFO Sightings Footage/UFO News/Canva.