UFO Attempts To Dock With The ISS | Cannot Be Light Anomaly

This is a spectacular UFO filmed at the International Space Station and it looks like it's trying to Dock with it. It's real video from NASA archives.

What the heck have I stumbled upon here, this is so incredible that I nearly scrolled past it, until I realised it's behind the Era or European Robotic Arm attached to the ISS.

This UFO physically cannot be a light anomaly, in other words it scientifically can't be a light anomaly from the Sun reflection on to the camera lense as it's "literally behind" the Era (European Robotic Arm) and for a lens flare to occur the Suns rays has to hit the erm, we'll lens because that's the literal definition.
I have to agree with the video title that this UFO looks like it's trying to Dock with the ISS and that's because of how close it is to the ISS, why else would it be that close? And it looks like the Astronauts on board are cool with it because if it was me, I'd have used the Era to move it away. In the politest way possible! Actually I'd defend the ISS with it. We can see in the image just below that it's behind the Robotic Arm, therefore it can't be a lens flare and that makes it a UFO. A Bona-fide real, UFO. 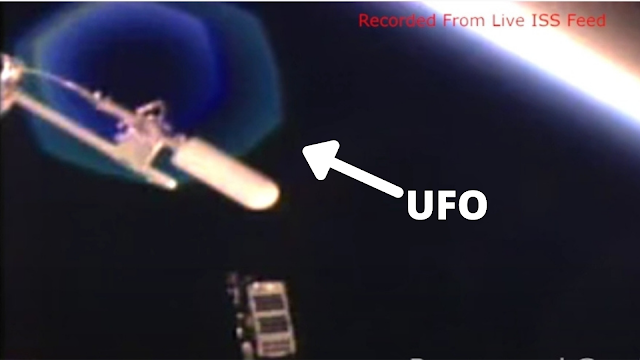 Credit: Paranormal Crucible YouTube Video/NASA/UFO Sightings Footage/UFO News/Canva.
When it comes to the ISS, all bets are off that a UFO on Live TV will turn up! Seriously, you'd think it's a sure bet that one would never turn up, well I know better and that's because thousands of people have witnessed a UFO turn up and for NASA to turn the live TV feed off! Not before a few seconds about 10 seconds or sometimes about 15 seconds before it's fully switched to the blue screen. That's how many times UFO crafts turn up to the ISS or are filmed in the background of the ISS.
Related post
Cosmonaut Yells "It's A Ship" Referring To A Large UFO Next To The ISS
Just out of curiosity guy's, I wonder how many people have seen this UFO while scrolling (surfing) and thought to themselves "omg that's so fake" but not actually taking the time to take in the full image? I bet the number of people seeing this that actually have had the realisation or epithany if you like, that it physically can't be a lens flare? I do know though, that as humans, when we dismiss something we tend to lose all interest very quickly.

Here's the other piece of the jigsaw that categorically and once and for all dismisses the lens flare theory which leaves this as a large Hexagon UFO at the ISS. I'm so, so glad I discovered this and that I didn't just dismiss it. 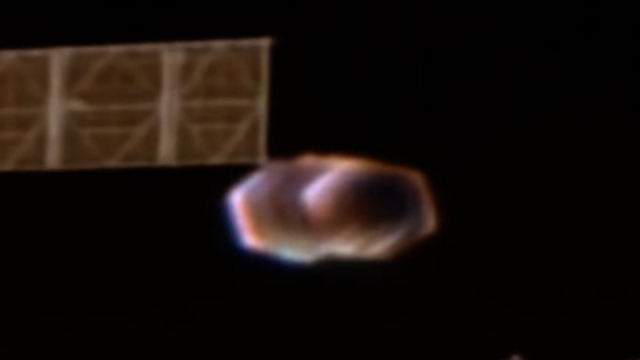 Credit: Paranormal Crucible YouTube Video/NASA/UFO Sightings Footage/UFO News/Canva.
It's the smallest details like this that can verify a UFO without having a photo having to be forensically examined and it's these small inconsistencies that make all the difference.
Because of the solid nature of this UFO and the fact that it's so close to the Russians part of the ISS that this must mean NASA is 99% aware of this UFO incident. Think about it, these ISS cameras are monitored all the time, it's a safety issue so I'm very confident that NASA has been aware of Alien entities coming right up to the ISS.
Related post
Top Secret Flying Saucer Filmed in 1992 it's To Big To Be Man Made
What does that mean if NASA’s aware of Aliens in space, flying spacecraft up to the ISS? It means that an agency of the United States is withholding information from the public that would change history. And, that's why they are saying nothing about it. It does not matter if their sole purpose in space is to look for the existence of Extraterrestrial entities and proof that we're not alone in the universe, just like it says in this amazing video. Unfortunately there's no information whatsoever with the UFO video as the description in the YouTube video doesn't mention anything. It's also not mentioned in the video.
Here's the full YouTube video by Paranormal Crucible:
Please share your thoughts on this amazing UFO video and if you can share this post I'd appreciate it, cheers.
Credit: Paranormal Crucible YouTube Video/NASA/UFO Sightings Footage/UFO News/Canva.