It would seem that an astronaut and ground control was on audio getting their story straight about a UFO that was caught on camera passing astronaut.

NASA Shuttle Mission STS-77 is called the Unidentified Flying Object video because of what is was said aloud on the comms to ground control.

I kid you not, this is how I've interpreted what is going on here. It really looks like we have an Astronaut and ground control getting their story straight, over open communications with the public been able to access these historically valuable audio informational records!
Say hello to the UFO, these are exhibit A and B. They are what they look like right, which is absolutely nothing, so, a UFO then. They're reminding the Astronaut and ground control of nothing so they make stuff up like a light on the ground maybe, to a star passing by - yep, I kid you not he says a star lol. 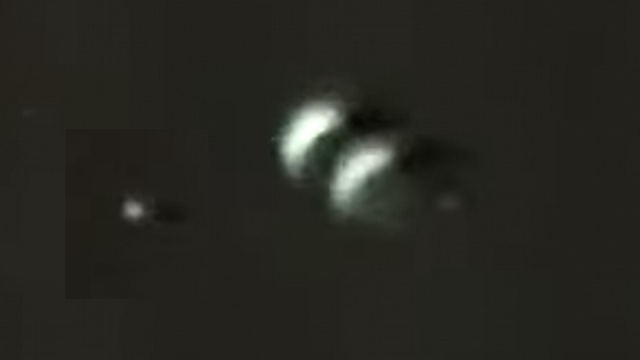 Credit: NASA/Martyn Stubbs/UFO Sightings Footage/UFO News/Canva.
Okay, maybe, "maybe" saying that the Astronaut and ground control are getting their story straight isn't the only way to describe these communications but it most certainly sounds just like that, word for word. The Astronaut could be interpreted as putting words into ground controls mouth, it could be interpreted as they're innocently trying to figure this out. But, when you add human behaviour into the mix, and both ground control and this Astronaut avoidance of the obvious, it makes me wonder why they aren't following any normal human behaviour pattern and why are they actively avoiding the word UFO or "what was that". If they're controlling what they are saying carefully and they don't say the most obvious thing it could be, then they're either trying to throw anyone listening, off the scent or something else?

"The Astronaut and ground control are getting their story straight as they call the UFO a light on the ground then saying it could be a star." That's exactly how I've interpreted that communications exchange.

Believe me, it's a very, very simple case of say what you see, right? And they wouldn't say it. And that immediately raises my own suspicions. Now, I don't know about what the next person thinks while listening and watching this but anyone's basic instincts should be to say what's that, right? Especially if they don't know what it is their instincts are just like everyone's and would be to at least say "it looks like a UFO." No matter what their training is - which seems to me, would definitely be to go through a list of rational thing's that it could be but without bringing the terminology UFO into the equation. And why is that? Is it because NASA is hiding something bigger, is it part of the bigger picture or is it because NASA knows it might get blown out of proportion by the likes of say... me or another UFO enthusiast?
Overall, it tells me that while NASA say's it's main objective is to search for the existence of Extraterrestrials in space (see below), it tells me that they don't want to do that. It also tells me that they either don't believe in their own ethos or they deliberately refuse to go there just like they refused to say that this could be a UFO in this article video which is exactly what it was!

Even if a UFO is served up on a platter just like this one is and it most certainly is a UFO because the Astronaut tried to identify it twice but was still unsure as to what he's witnessing and as such or hence, that makes it a UFO by default.

The astronauts quickly fell back into a routine, they just continued down the old road of tried and tested methodology of deliberate and already rehearsed and pre-chosen words, that's a deliberate and calculated pre-planned course of action but unlucky for them, it's extremely easy to spot! Well, by me it is anyway's. And to boot, they totally refused to even go down their own agencies publicly acknowledged pre-course of action "to search for signs of Extraterrestrials microbial or intelligent Alien life". See my own research below about NASA's objectives.
It even looks like the target in the video is changing it's shape? If you check it out early and then compare it after or towards the end of the video, it seems like it's changing it's shape? I've put a side by side comparison image below: 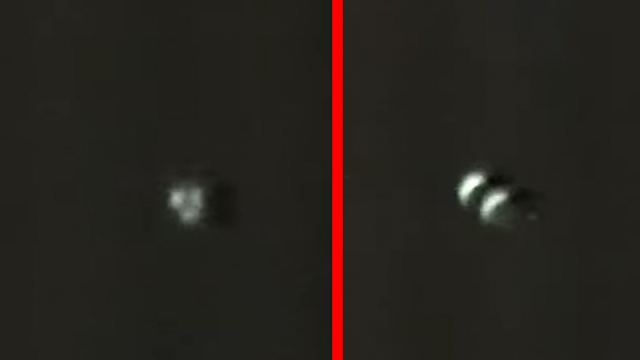 Credit: NASA/Martyn Stubbs/Sightings Footage/UFO News/Canva.
So they should of put effort into following it, watching with the cameras. Just like the Navy Pilot's did. They saw the UAPs and they followed them. Quickly realising what they had or was in pursuit of, they gave chase to the UAPs while filming them with their Flir camera because the Pilot's of the Navy Jet's couldn't see these UAPs in normal 20/20 vision and could only be seen by using their on board Forward Looking Infrared cameras and they gave chase!
The Navy Pilot's (UAP videos) (all respect to them), they gave chase to those thing's until they went into the water and came back out of the water and still kept them in the cameras lens.
Unlike the NASA controllers who actively dodge anything and everything to do with UFOs. I wonder why that is? They need to live up to their reasons for been in space, the reasons they put on the applications for grants. To further the exploration of space, to search for the signs of Extraterrestrial life. That reason is on a lot of money applications "I assume through what I've read, I'll look it up now" that they make, yet faced with one they refuse to even call it what it is and make stuff up they know it's not.
I've looked it up and it is what I said, check this link.
NASA's mission:
NASA Is Taking a New Look at Searching for Life Beyond Earth.

"The explosion of knowledge of planets orbiting other stars, called exoplanets, and the results of decades of research on signatures of life - what scientists call biosignatures - have encouraged NASA to address, in a scientifically rigorous way, whether humanity is alone. Beyond searching for evidence of just microbial life, NASA now is exploring ways to search for life advanced enough to create technology."
"Technosignatures are signs or signals, which if observed, would allow us to infer the existence of technological life elsewhere in the universe. The best known technosignature are radio signals, but there are many others that have not been explored fully."

Think about it, if NASA has a clear UFO (they tried to identify it twice) and they don't even go down their own ethos route, of which they want the world to think that they do, then we know that NASA is absolutely 100 percent hiding something that it (NASA) already knows is 100 percent sure of.
And you can take that to the Bank because that's Bankable! If an astronaut and ground control cannot identify a light going past another anomaly, they talk about what it can be, then that's the very definition of a UFO, right? Please, correct me if I'm wrong.
Related post
Decoding The Black Knight Satellite UFO | What The Heck Is It
This is where I start to doubt myself; what if I'm wrong? What if I've totally got the wrong end of the stick and what I'm seeing isn't how it's intended to be interpreted? Maybe I've jumped to a conclusion to fast, I should of waited another 2 decades before I should start blabbing off at the mouth? Okay that's all sarcasm but it happens and a lot of people who see anomalies in NASA videos or in Mars photos etc need to understand that without their "efforts" without their interpretations and unique ways of looking at things this whole UFO enterprise since the beginning wouldn't have seen the light of day because NASA won't even confirm or deny what day it is! Yet they're whole reason for existing is to travel space, colonise space and search for the existence of Extraterrestrial entities and or for the science. But they won't even confirm a single thing, they never have unless someone retires and to hell with it, what have I got to lose and the whistle-blowers. Then the hackers.
Here's the full video with the all important audio which was uploaded to YouTube by Martyn Stubbs Archives Channel:
Please share your thought's and opinions also any ideas that you might have about this amazing UFO sighting with the even better audio which is very enlightening in reference to what they don't say. I'd also appreciate it if you could share this post with someone who you think would appreciate it, cheers.
Credit: NASA/UFO Sightings Footage/UFO News/Canva.