Decoding The Black Knight Satellite UFO | What The Heck Is It

The Black Knight Satellite UFO was detected in the early part of the 1920's by an astronomer. There was a transmitted signal detected and decoded.

This isn't new news or a new revelation but what is new and a continuing evolution is the decoding of the signals being transmitted by the BKS. 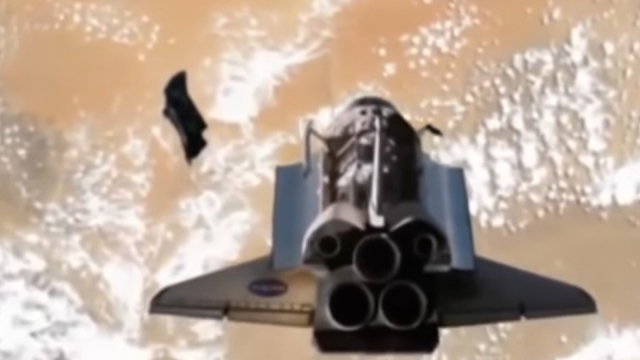 Credit: NASA/UFO Sightings Footage/UFO News/Canva.
Did you know the Black Knight Satellite UFO is transmitting a continuous signal and it has been suppressed since at least the 1920's when it was first heard? It's been discovered by many astronomers who didn't know, then felt the hand of the powers that be, and it was again "suppressed" and yet another astronomer was shut down!
Do you wanna see the list, the continuity of suppressed evidence time and time again? Then get a coffee ☕ and check out this fascinating, intriguing but frustrating (I'll admit now that it's frustrating) but very eye opening...
Check out this recent SpaceX Falcon video as it passes by the Black Knight Satellite UFO it'sreally interesting:
SPACEX FALCON ROCKET PASSES STRANGE ’BLACK SATELLITE’ SPACECRAFT
There's so many examples of NASA, astronomers and ham radio enthusiasts all coming into contact one way or another with the BKS. It's hard to ignore multiple ongoing incidents that continuously prove that the UFO is there! It's hard for me to ignore it but it's easy for agencies to simply walk on by it just like SpaceX has done here. You'd think they'd want to know for future space flights so it can stay safe?
Wikipedia quote:

The origin of the Black Knight legend is often "retrospectively dated" back to natural extraterrestrial repeating sources supposedly heard during the 1899 radio experiments of Nikola Tesla and long delayed echoes first heard by amateur radio operator Jørgen Hals in Oslo, Norway, in 1928.

The Black Knight Satellite, by the time this was discovered for some reason it was cemented or it could of been innate for all I know, that it's age is 13,000 that's thirteen thousand years old. It's not just me who's picked up on this really unusual oddity, because it is. 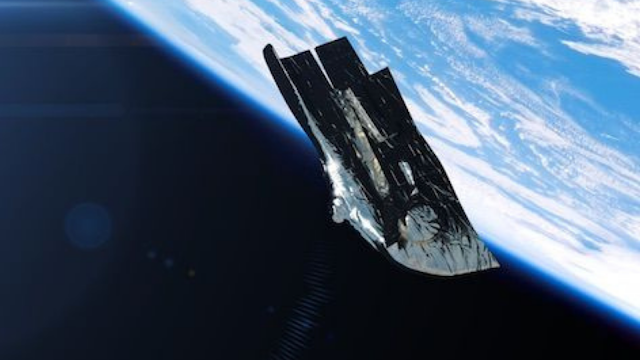 Credit: NASA/UFO Sightings Footage/Canva.
It's very odd, in fact check this link (Alien-ufo-sightings) real quick because it's another fellow UFO researcher that's also found this to be strange. The link doesn't take you straight to the bit about the BKS age it's further down the page but I'm sure you'll find the full Black Knight Satellite UFO story there just as exciting and interesting as this one.
Related post
UFO Filmed By NASA Following The ISS
Aviation magazine investigated the (by now accepted allegations about the BKS but also it's 2 Satellites in orbit not just one) and don't forget this was the mid 50's so the Pentagon was at an all time paranoia and state of emergency because of the cold War, the Pentagon officers thought the Russians had beaten the USA to be the first to travel in space and investigate space with a permanent residence because of the 2 Satellitesin orbit. I presume that one was perceived as a space station and the other was the taxi to get the astronauts "spies" back to and from their space station.
Below is the BKS UFO as it passed by the SpaceX Falcon rocket on camera and stunned everyone especially the people who know it's the Black Knight Satellite. 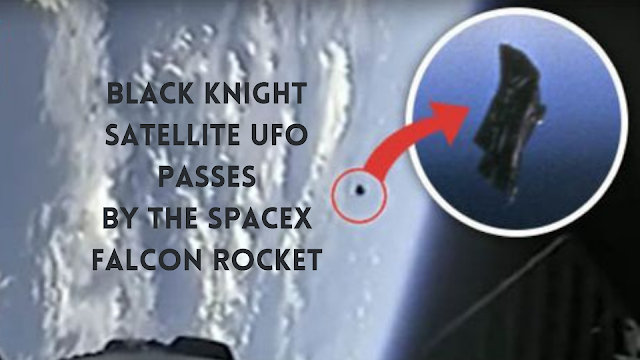 Credit Daily Star/SpaceX/UFO Sightings Footage/UFO News/Canva.
It's easy to see why there was a perceived threat, we've got 2 Satellites in orbit around Earth and one's transmitting a continuous signal! That can only mean that it's the Russians, right? Unless you count the unthinkable and that been the Extraterrestrials... I can imagine now what a compartmental Pentagon would look like - that's a paranoid agency, paranoid about it's own spies or moles and double agents, 😳 don't forget this is the Cold War and it's only getting colder!
They (the Pentagon) clarified that yes indeed there is "2 natural Satellites" in orbit around the Earth. One is at 400 miles out from Earth and the other is 600 miles out in orbit around Earth. It's not clear as to how the Pentagon came to this conclusion but hey, we've had quicker cover up and even faster conclusions regarding Cold War incidents sometimes within hours after many incidents, so this isn't nothing new.
Guy's seriously there's so much to write about but I don't want to bore you with the long version so I'm gonna write in a bullet point kind of way.
Here's an interesting quote I found:

WASHINGTON, Feb. 10 — An unidentified, silent satellite has been discovered circling the Earth in a near-polar orbit by United States tracking stations, the Defense Department said today. The identity of the mystery satellite — which has been dubbed “the dark satellite” are not known despite nearly two weeks of tracking.
It wasn’t long before people made the connection between the unknown object and Nikola Tesla. In 1899, he had detected a repeating radio signal and believed it originated in outer space. The enigma surrounding the black satellite was deepened by its strange behavior.
Virtually all the artificial satellites had been launched on West to East orbits (following our planet’s natural rotation) while this one circled Earth on a polar orbit, from North to South. Interestingly enough, polar orbits are employed by modern observational satellites that carry out mapping missions. So, was the Black Knight Satellite an observational unit? If so, who put it there?

Here's the information about the decoding:
So there's tons of information out there on this. I've read that it references a star map that was decoded from the transmitted signal, check this out:

Almost every article on the Black Knight Satellite mentions its age of 13,000 years without referencing the origin of this claim. In 1973, Scottish astronomer and science fiction writer Duncan Lunan said he had succeeded in decoding the message caught by two Norwegian physicists in the 1920’s.
The message was said to have come from a probe orbiting the Earth in the same Lagrangian point as the Moon and that probe had been sent a long time ago by the inhabitants of a planet orbiting Epsilon Boötis.

“Start here. Our home is Epsilon Boötes , which is a double star. We live on the sixth planet of seven, coming from the sun, which is the larger of the two. Our sixth planet has one moon. Our fourth planet has three. Our first and third planets each have one. Our probe is in the position of Arcturus, known in our maps.”
The star Arcturus was pictured in the deciphered star map in the position it occupied 13,000 years ago, hence the supposed age of the Black Knight.

Please, I encourage you to go out there into the world wide web and find as much of the best evidence that you can? I know it's impossible to bring you every point of evidence made that supports the BKS or every irrefutable piece of information that is there for everyone to see. I hope I've wet your appetite for what is probably the best kept open secret that there is in relation to real "tangible" evidence. It's been acknowledged by the Pentagon, Department of Defence and many US Tracking Stations plus notable astronomers. Check this also...
The identity of the mystery satellite — which has been dubbed “the dark satellite” are not known despite nearly two weeks of tracking.
It's such a fascinating story no matter what you believe. It's a story of intrigue, big names, even bigger institutions and the truth, ah the truth. We're not versed in the truth when we're born as it's either taught to us (it's interpretation only) or it's innate. You decide after however many year's you've been on this Earth, you choose the path that you find familiar in it's obviousness. In it's played out life you choose what to believe, or not?
The  facts in this case I'm afraid have no bearing because as we found in the early days of this specific "space debris" that it was acknowledged by all parties including the DoD, Pentagon, Astronomers,  Tracking Stations. Back then space debris "I might add" wasn't tracked! So no matter what you choose to believe, the fact is that something is most definitely,  without question there.
The insulation blanket is not this, that insulation blanket couldn't be tracked by any tracking station back then in the late 1950s and that only happened in 1988 when it was lost then! So again, don't let the misinterpreted and so-called answer's misguide you. Stick to the facts, the dates, when technology was available and of course, remember that Nikola Tesla told us all about this but in different name.
Here's a  video I put together showing the Shuttle being filmed from the space station;
Please share your thought's and opinions on this unusual Black Knight Satellite UFO. It's alway's great to revisit this interesting conspiracy. I'm always finding out new stuff about it. It's full of contradictory stuff and lot's of facts plus exaggerated claims. But the fact that it's been proved to be there before the heat blanket, that's the ney sayers biggest piece of evidence, that leaves it been a UFO clearly the winner in my view, how about you?
Credit: NASA 1998 Official BKS Photo/Alien-UFO-Sightings/UFO Sightings Footage/UFO News/Canva/Wikipedia/Pentagon/Nikola Tesla/Jørgen Hals/Daily Star.