This is a UFO sighting but at the Sun. It's a set of UFO Orbs spaced out on a triangle formation that could be a large UFO half cloaked invisible.

Many times has NASA’s own Helioviewer Lasco C2 Satellite Camera picked up some of the strangest shapes and sizes of UFOs either coming out of the Sun or going into the Sun and sometimes UFOs simply pass right through it or pass it altogether just next to it.

On this occasion though we can see what really does look like a semi invisible craft in a triangular shape made up of what can only be described as UFO Orbs equally spaced apart and in the typical triangle shape with the bottom of this triangle having a curved shape to it which is also made up of more equally spaced UFO Orbs.

Related post
NASA Quickly Cuts Live Feed To Hide Weird Looking UFO That Turns Up
It looks incredible and intelligently designed and almost as if it's controlled by a real force keeping these UFO Orbs perfectly aligned and equally distanced creating what we see as a triangle shape. There's lot's of way's to describe this UFO looking craft and this is but one way.
It's not everyday that we see an unusual looking UFO Orb type outline of a triangle especially considering it's right next to the Sun, these UFOs or Orbs just by themselves must be massive in size! These UFOs individually on their own must be Planet sized even?
But one thing I do know is that this doesn't seem to be normal by any standards or stretch of the imagination. It looks to precise, it looks to equal, it looks to big and to be honest with you anyone looking at this might think yeah it looks a bit strange but it's a normal common event in space? But also people should think about how unnatural it looks?
Related post
Huge Fleet of UFOs Filmed Over Austin In Texas
Because it definitely looks as if it was created by something or someone... And there's nothing normal or coincidental about that. But I am open to the idea that this could be absolutely anything by way of a space event happening naturally. I just want it noted that this looks to me and a lot of other people like "another" craft at the Sun. 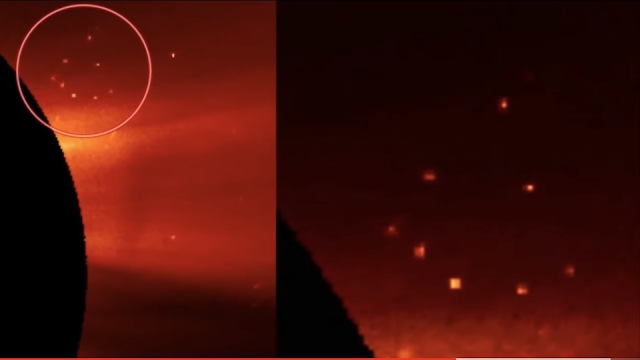 Credit: NASA - Helioviewer Lasco C2 Satellite Camera/Behind The Scenes YouTube Channel/Sightings Footage/UFO Sightings Hotspot/UFO News/Canva.
These UFO Orbs in this shape, right next to the Sun are the strangest thing's we will ever see. It looks like a genuine formation of crafts travelling through space and as technology evolves so does it's uses and given time, effort and will, who knows what this species has achieved "already". 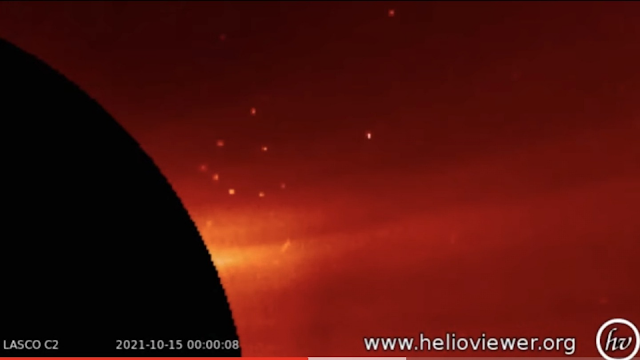 Credit: NASA - Helioviewer Lasco C2 Satellite Camera/Behind The Scenes YouTube Channel/Sightings Footage/UFO Sightings Hotspot/UFO News/Canva.
Let's just say that there's life on other planet's and this life on other planet's started intelligently evolving 4 or 5 thousand years ago? What if their wheel was invented 5 and a half thousand years ago before ours had been invented? Seriously, there's no limit to what can be achieved with a science based practice or something else entirely different than what we see here on Earth?
Here's a quick quote from UFO sighting's Hotspot:

The lights are exactly opposite and parallel to each other and seems to be connected, forming a triangular shape.
Since it seems impossible that this phenomenon is just a natural or rare occurrence in space, we assume that this partially cloaked triangular object is some kind of advanced technology used by an intelligent race.

Here's a video about this amazing UFO sighting filmed by NASA at the Sun by Behind The Scenes YouTube Channel:
Please share your thought's and opinions also any ideas that you might have about this amazing UFO sighting filmed next to the Sun. Also I'd appreciate it if you could share this post with someone who you think would appreciate it if you could, cheers.
Credit: NASA - Helioviewer Lasco C2 Satellite Camera/Behind The Scenes YouTube Channel/Sightings Footage/UFO Sightings Hotspot/UFO News/Canva.