The Strangest Flying Saucer Caught On Camera From Airplane

A fantastic UFO sighting that happened in the air ehile a plane was flying. The pilot filmed this from the sky and it looks genuine but can't verify.

I'm staring at this unusual Flying Saucer that's passing by an airplane and I'm struggling to figure this out, is it real or is it an Adobe Photoshop design?

I'm sure it's evolved on from people using Adobe Photoshop or something else entirely? Look, this is why I'm posting about this today, I'd really, really like your input on this. I don't want to put you off UFOs but realistically speaking there's plenty of different places where people can get extremely convincing graphics, layering piece after piece of all types of different filters and 3D structures, 3D objects and even blooming clouds. It's a massive leap from 20 years ago when it was huge computer TV's on top of white computer desktops. Can you remember those monsters lol. 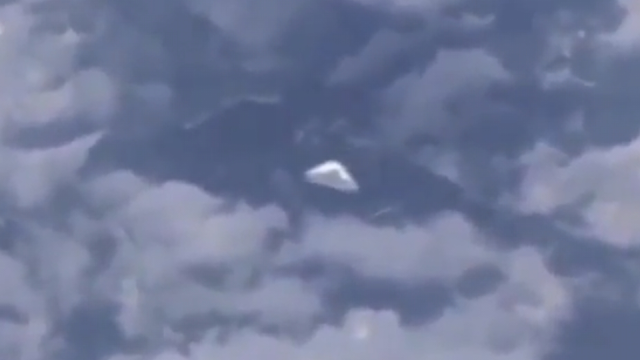 Here's a silver lining because it's still not been debunked or claimed by any "artist" shall we call them! It's white in color and a type of flying saucer, it's more Disk like to me until it gets closer then it changes shape to a triangle. It also comes really close to the airplane and it's coming way to close to the eye witness. I tried to research all I could with this, screenshot matching, image recognition software, object recognition and it's not that typical of such UFOs in returning back absolutely nothing! Usually there's at least something? Oh yeah, that's typical because of the nature of Ufology. It's not everyday that people are filming this type of craft with the same or similar background for instance so maybe that's why it's not got any story attached to it?

So narrowing down the place, the time, the people right down to what year ot was filmed is extremely difficult and it's so frustrating. But we can't dismiss it because look at it, it's awesome. I even have started to ask myself why am I doing this? What new information am I bringing? What impact am I bringing to the UFO genre? It's a real subject, I know that but without any specifics (which is what I try to post about) I'm starting to think that these particular UFO sighting's are a waste of time? What do you think?

I could start posting about the UFOs that have a huge back story with eye witness testimony and a Guinness book of records medal for most informative UFO sighting. But where's the challenge in that? I'm most certainly not bringing anything new, but what I'm dedicating my time to isn't that different really or is it? The only thing that is different is that I'm giving you my opinion on what I'm seeing. I can't do anything else because if I do it's not true is it, I'd just be adding speculation? I think I'd rather "say what I see" and bring these untouchable UFO sighting's. Believe me, more established news and UFO bloggers will only write about UFO sighting's that have a story because otherwise they don't have anything to talk about?

Whereas I believe that every single one needs to be brought to life. We've got a UFO sighting, but no story - of course there's a story it's the actual physical UFO itself! Say what you see, right? If it's metallic silver in color, say that. If it's in a classic Flying Saucer shape then mention that. If it's day time, say it. Mention the unusual looking dome in the center of the flying disk that resembles a kettle lid with handle.

It's got real written all over it, but between the lines it's could be saying fake as a ten bob note! I wanna get behind it but I think I'm going to be analysing this a bit more or at least wait for more information.

Coffee literally helps the world go round and if you don't believe me, you can ask anyone who owns kettle it's real.