Guy's, this is one of the best triple UFO sightings that there probably is. We're getting a running commentary on the UFO Orbs which makes it real.

This is one of them absolutely amazing and jaw dropping UFO sighting's that I honestly think is "very real" as the people are giving us a running commentary as it starts to disappear one Orb at a time.

That's gotta be one of the best UFO sightings that you've probably seen in a long time as well? It's a hovering triple UFO sighting with Orb like spheres that seems to be lit up with an inner light? 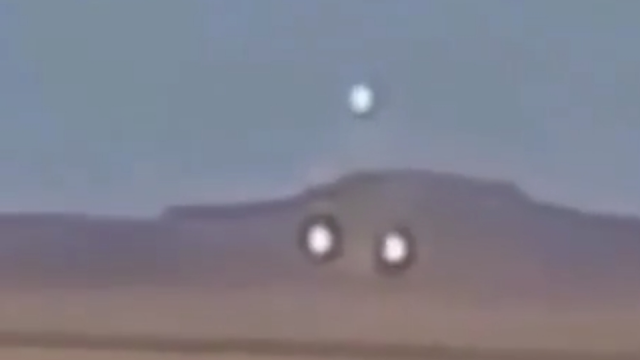 It's different from the glowing globes because they well, glow. These Orbs are balls of light, a white blinding light. If it was night time it'd be a blinding white ball of light. These women actually say during the video that they "they heard us up on the mountain" but I genuinely don't know what they are referring to?

It could be that they have been followed by these UFO Orbs for a while and that the video is a lot longer but this is literally all i could find out about this? It's a damned good UFO sighting if you ask me!

It could also be that the UFO Orbs have been trying to get away from the ladies following them? However, the women definitely said in the video that they might have herd them on top of the mountain? I wonder what this actually means though? Have they been trying to communicate with the UFOs?

"Future President Jimmy Carter files a report with the International UFO Bureau on September 18, 1973, claiming he had seen an Unidentified Flying Object (UFO) in October 1969".

"During the presidential campaign of 1976, Democratic challenger Carter was forthcoming about his belief that he had seen a UFO. He described waiting outside for a Lion’s Club Meeting in Leary, Georgia, to begin, at about 7:30 p.m., when he spotted what he called “the darndest thing I’ve ever seen” in the sky. Carter, as well as 10 to 12 other people who witnessed the same event, described the object as “very bright [with] changing colors and about the size of the moon.” Carter reported that “the object hovered about 30 degrees above the horizon and moved in toward the earth and away before disappearing into the distance.” He later told a reporter that, after the experience, he vowed never again to ridicule anyone who claimed to have seen a UFO".

"During the presidential campaign of 1976, Carter promised that, if elected president, he would encourage the government release “every piece of information” about UFOs available to the public and to scientists. After winning the presidency, though, Carter backed away from this pledge, saying that the release of some information might have “defense implications” and pose a threat to national security".

I'm getting behind this triple UFO sighting which we actually see the UFOs in formation and I think we witness them going into the Infrared part of the spectrum. The 3 UAP videos saw the Tic Tac shaped UFOs in black and white right, wrong! They was filmed in Flir which stands for Forward Looking Infrared. It shows up on camera as BW.

Is this what we are witnesses to right here, years before the actual Tic Tac shaped UFOs was even a public announcement? I'm starting to think that there's a lot more than anyone can imagine. More than meets the eye and that this could just be the tip of the iceberg! There's plenty of UFOs on camera that look like the Tic Tac UFOs, how many are here on Earth? Because it's been made very clear to us all that the US Government ruled out everything except for the Extraterrestrial craft's answer.

People In China Stopped Their Cars On Highway To Film UFO

So, just how deep is this Rabbit hole and can I get out? There's no way to know how many UFOs are real, how many have come to Earth and how many came from elsewhere? Are dimensional pathways opening up? Is there beings working with our Government's and are these beings creating new UFOs? What's the way that these Orbs use to get here is basically what I'm trying to say? Have they been here all along... Did we stumble upon them by accident? Did we create a type of craft with AI? Do they think for themselves now...

Seriously, can augmented reality exist inside of artificial intelligence, can this even happen? It'd be crazy if it can happen. Okay, check this out:

Augmented reality and virtual reality (AR/VR) are two promising technologies that businesses are keeping an eye on. In fact, nearly three-quarters of industry leaders report that they expect these immersive technologies to be mainstream within the next five years and Goldman Sachs reports that the AR/VR industry will be worth $95 billion by 2025. At the same time, running in parallel is AI and machine learning, which are not only becoming mainstream quickly, but are now considered mission-critical for modern business.

Who knows what human beings are operating on now, just how far has humanity fallen down that Rabbit hole, for real? We're capable of anything, humans in the future are going to be playing God on a daily. What we've achieved in 100 years "statistically speaking" was probably unlikely to have happened if you'd had a bet with someone 100 years ago! Look at it, it's seriously and sincerely bad with some good, or whatever it is but what we've achieved is probably absolutely nothing compared to the next 100 years! Let's start with pandemics and wars.

It's going to be so futuristic, scifi, unprecedented stuff and we will be seeing humanity at it's worst! But we're also going to see humanity at it's finest, I see it now. The last 100 years has taught us only one thing, in 100 yrs time "you can hear a pin drop"., 🤚🤲👉👈👆👌🤌🤚

Here's the extraordinary video which is brilliant.

Please can you share this post with someone who'll appreciate it, id also like it if you shared your thoughts and opinions on what you think is going on here in this UFO Orbs video, cheers.