This is a fantastic UFO sighting that happened in the sky from the window of a plane. The plane was flying between Boston to Denver Colorado.

Is it real? Or is it CGI? What is that white UFO, is it a Tic Tac UFO or a different one because if memory serves me right, we could only see them through Infrared cameras?

And why is it so bright? I don't remember them being so bright in the videos, do you? These are legit questions which I look to answer in my research of this video and this unusual looking video offers some intriguing insight into the UFO sightings of the unexplained and unexplained phenomena.

Even if it turns out that a UFO sighting I'm looking into is a hoax, it doesn't matter right because it's helping me, you and anyone else after all because it's been figured out no matter what. It might even help people figure out how to spot a fake UFO sighting in the future... In turn though, it's going to help you spot a hoax UFO also. 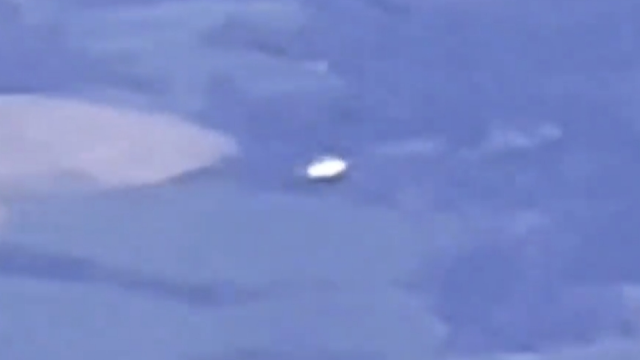 This UFO was filmed by a passenger on board an airplane which it then flew off without any exhaust system, there's no propulsion system neither. There was zero thing's on the outside of the UFO and nothing to pull or push it through the atmosphere? That really doesn't add up at all in anyone's language! The video shows a bright white UFO (way to bright if you ask me) flying near the passenger plane, literally just a hundred feet away and it was following it but in the distance.

The sighting apparently occurred over the US from Boston to Denver where numerous UFO encounters have been reported in recent months. I'm still skeptical about this one though guy's because the Tic Tac shaped UFOs or should I say UAP's can't be seen in the visual part of the spectrum or can they? Also was it just a coincidence that the jet's had Flir cameras attached to the outside of the Jet's at the front of the plane?

The white ufo is filmed from the window of a private airplane which then flies off.

The bright white object was filmed through the window of the airplane. The object is shaped like a classic Tic Tac and seems to be gliding across the sky. It's got no wing's, there's no visible propulsion system so technically it should not be able to make it off the ground let alone in the sky at the height of aircrafts. It was filmed during the daytime with a clear blue sky.

Video description:
Oh believe me it looks epic, that's all well and good right I hear you saying... But I remember right, didn't the Tic Tac UFOs not show up on normal vision cameras? I think they could only be seen and filmed in Flir which is why the screen is black and white? But yet here we are with a UFO sighting that absolutely does look epic, right?

There's a reason why the UAP videos where in black and white? It's called Flir or Forward Looking Infrared which it's cameras can only film in this particular part of the spectrum, the screen is turned into a black and white looking TV and if you was to look up, you'd literally see nothing! If you was to look back down at the screen, you'd see a UFO. This os what happened to the Jet pilots and can you imagine trying to explain that into a microphone flying at 1200 miles per hour or mach 1.2.

The F/A 18 Super Hornet can only reach 1200 mph but the Nimitz Radar crew tracked an object accelerating from a standing position to traveling 60 miles in a minute "an astounding 3,600 miles an hour."

Have you seen a UFO? Are you curious about the purpose of the alien visitation? Do you wonder what is behind these numerous sightings? UFO Sightings Footage is reporting the facts, the history and current happenings from around the world. I have put together this website with the aim to increase awareness of this phenomenon, which has been suppressed over many years.

You probably already know that, but as we've had UFO disclosure with the UAP videos, it's only getting better and more widely accepted which if you remember it really wasn't accepted by a lot of people! Look where Ufology is now, politicians are asking for the evidence now, we've kinda won a huge battle but we've still got the ultimate answer yet to come. Do Extraterrestrial entities exist? We are here to investigate claims by witnesses and participants of UFO sighting's and other encounters with extra-terrestrials. It really does feel like I'm just getting started.