This is a fascinating UFO sighting of which we get to see an actual UFO changing it's own shape. Guy's it's a real UFO sighting, filmed over Canada.

This UFO sighting is absolutely unbelievable stuff because it's literally changing it's very shape and it's tens of thousands of feet in the sky so it's not been controlled.

There's plenty of UFOs in the sky, in the world and actually there's probably someone, somewhere right now actually filming a real UFO now. 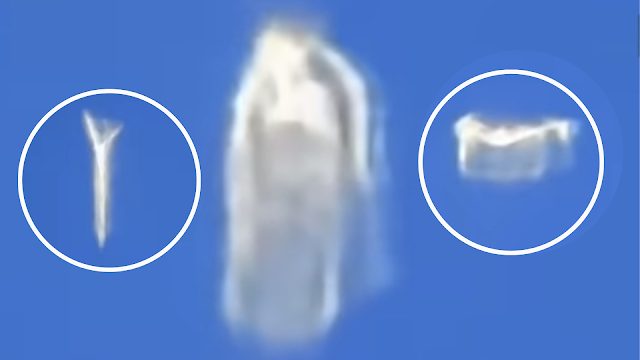 Two people on YouTube have both posted public questions and answers to this brilliant UFO sightings footage;

One person (Robs World) has quoted:

Know it sounds unbelievable, but when I think about it—looks like it could be a 4th or higher dimensional object. To us in the 3rd dimension it would just look like some weird thing passing through. Like us putting our finger into a 2D world they would just see a weird cross section or odd changing shape as we moved it deeper in or in different directions. But who knows 🤷‍♂️ nice capture, don’t think it was a reflection

Another person (Stefan Schelps) has quoted:

What these captivating personalities on the morning news failed to point out to us, at least in this clip, is that the object is traveling along with that plane at about 550 mph, and forty thousand feet up, as it is shifting shapes and forms. And the last thing you are thinking is "Hey everybody look out the window. Do you see what I see?" First because of the ridicule factor. And second because you don't want to be banned from future flights. And thirdly because you don't want some federal agent stealing your camera upon landing at the next airport. Most people don't have the prescence of mind to pull their camera phones out in that instant when you notice the UFO. At that moment you are in shock. I was, at forty thousand feet. A long silver white cigar shaped UFO flew past our jet like we were standing still. Didn't even have time to ask my girl if she saw it before it was gone. Now I've seen three. A sphere, the cigar shaped craft, and a weird one. Like this weird one. You will see one soon enough. Be strong. Peace.

This is just a quick video because I don't want to spoil the video for you. I can go ahead right now and tell you all about it but wouldn't you just rather see it for yourself now?