Here's a fantastic UFO sighting over Italy while a guy (the eye witness) was travelling on a train while looking out the window. What a good sight.

This Triangle shaped UFO looks like UFO Orbs at each corner of the Triangle which isn't that far fetched and actually it's what is called a TR3B.

The video was apparently shot from Italy on November 02, and it shows three bright glowing UFOs hovering in a triangular formation in broad daylight. 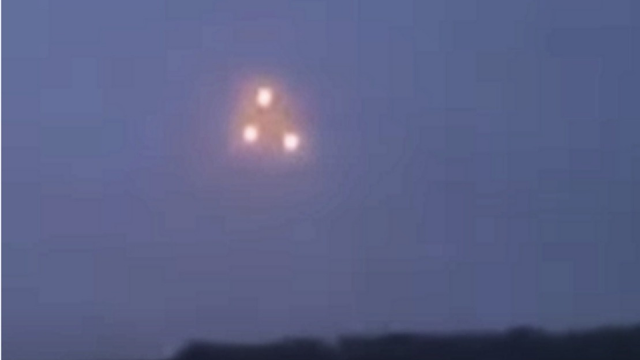 Credit: UFO Sightings Daily/UFO Sightings Footage/UFO News/Canva.
Whichever one you believe in it doesn't matter because that's neither here nor there, what is important is the fact that Extraterrestrials were recovered, their technology was plundered like a shipwreck on the beach - and we don't see anything from it.

An eyewitness was sitting on a train passing near Rome when they noticed three glowing lights in the sky. The lights were in a formation of a triangle which makes me think it may have been a single UFO. Some alien craft has propulsion systems that glow when warming up. Similar to the USAF TR3B, triangle UFOs have been seen for decades across Europe.

UFO Casebook is a real place to get UFO News.
Related post
This is The Largest UFO Super Cluster Filmed At One Location In New Mexico
Quote IBTimes:

It should be noted that the TR-3B is an alleged anti-gravity military vessel developed by the United States Air Force during the Gulf war. Conspiracy theorists believe that this military vessel was developed with the help of aliens, and the government has successfully covered up the existence of this advanced flying ship.

NASA and the Pentagon, the CIA, Military Industrial Complex and subsidiary companies of those, all hand picked (of course) have each worked on different parts which they specialise in. This is common knowledge that scientists have been working on recovered technology and what your looking at here in this video is a product of their collective effort. Antigravity and anti-matter reactors are now in the hands of humans with help from Extraterrestrials.
Related post
400 Foot Wide Crashed Flying Disk Discovered on Mars Half Covered By Martian Soil
If I was to list everything that you know about this, also what the person next to you knows, or any other UFO enthusiasts point of view for that matter I'd run out of space! And, we've all got our own take on it, it's pretty similar around the same UFO knowledge but it's in the details which can be quite different.
Related post
US Navy Destroyers Comes Under Attack By UFOs | The Aftershock Hits Navy Ship
We all want this UFO encounter to be real, me the most but it's alway's good to stick on track and believe me, it's a very hard effort.
Here's the full YouTube video uploaded by Scott Waring YouTube Channel:
Please share your thought's and opinions also any ideas that you might have about this amazing UFO sighting filmed over Italy. I'd also appreciate it if you could share this post with someone who you think would appreciate it, cheers.
Credit: UFO Sightings Daily/UFO Casebook/Sightings Footage/UFO News/Canva.