This UFO is in lot's of pieces flying past the ISS. I believe that we're seeing a UFO wreckage that has met it's end and we're seeing the wreckage.

Seriously, I'm dumbfounded, because to me it looks like the wreckage of a UFO as that's deep space behind it all as we can see the stars.

Behind this wreckage is space, if this was the actual Earth passing by, please explain the stars in the background because we should be seeing an ocean, right? We should be seeing land and even though it's nighttime, the stars could not possibly be there! Then there's the smoke, it's not clouds because again, if the stars in the background are a camera defect etc. And if the "stars" are a camera anomaly then what else is a camera anomaly, a few corrupt pixels or a lens that's broken. Either way the argument for this been a bona-fide real UFO sighting looks good 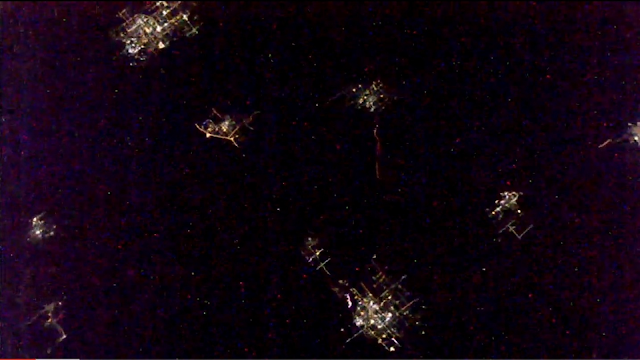 Credit: NASA ISS Live Feed App/UFO Sighting's Footage/UFO News/Canva.
This is right up my street because I've always said that there's a chance we won't even recognise a real UFO even if we see one. There's smoke, there's what looks like wreckage with light reflecting off all these pieces of wreckage while it's all streaming past the ISS. Towards the end of the video we see a piece go by that has what looks like a light on it? That's at 1:37 with the light on the debris in the middle of the screen at the bottom.

There's a chance that we will not even recognise a UFO sighting if one turns up anyway? Lee Lewis UFO Sightings Footage

And that seems to be coming true! Space is behind all this lot going past the ISS so it can't be Earth lol not that anyone can mistake this lot for the Earth, but just incase someone decides that it's the Earth, it ain't! Again, there's star's in the background. 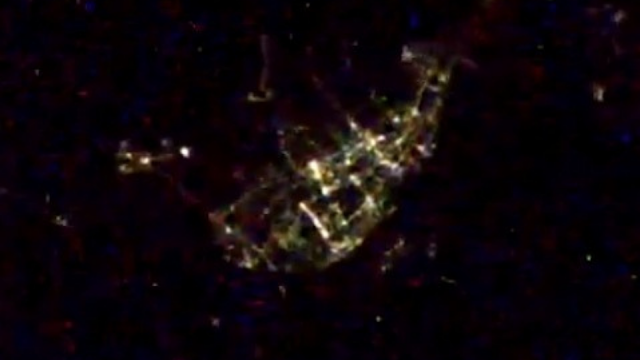 Credit: NASA ISS Live Feed App/UFO Sighting's Footage/UFO News/Canva.
What's this flying past the ISS in unbelievable detail, in what I can only describe as a UFO wreckage that is now in clumps of debris and to be honest it looks like gold in a close up image crystallising. It really does look like crystals growing almost as if it's branching out? That's only an opinion though and if we take into account what we are actually seeing, humans are in space and relatively quickly I might add. In 2,000 years we've gone from beards and sandals, and the Earth being flat and square ie all four corners of the world, to the colonisation of space with a permanent residence. So why can't another species be out there and far ahead of humanity? Why not!
Related post
UFO Flies Right Up To The ISS Then Flies Back The Same Way It Came | Intelligently Controlled Craft
Check out this absolutely fantastic UFO sighting filmed right next to the ISS but flying past it. There's even what looks like smoke sailing past as if all this wreckage is a chunk of space drifting past, it's breathtaking if it's what I suspect it is.
Here's the full YouTube video uploaded by the Mary Hall YouTube Channel:
Please share your thought's and opinions also any ideas that you might have about this amazing UFO wreckage sighting that might possibly be passing by the International Space Station? Don't forget that these are just my opinions but it's based on "what else could it be?" I'd also appreciate it if you could share this post with someone who you think would appreciate it, cheers.
Credit: NASA ISS Live Feed App/UFO Sighting's Footage/UFO News/Canva.