There sometimes comes a time when people are trying to get one over people by hoaxing and faking a UFO sighting. What's their reasons for deceiving?

Look, from the outset I'm not to sure about what to believe regarding this UFO sighting.

It's all because of the flames as they literally look like they're way to small coming from the top of this so-called UFO. 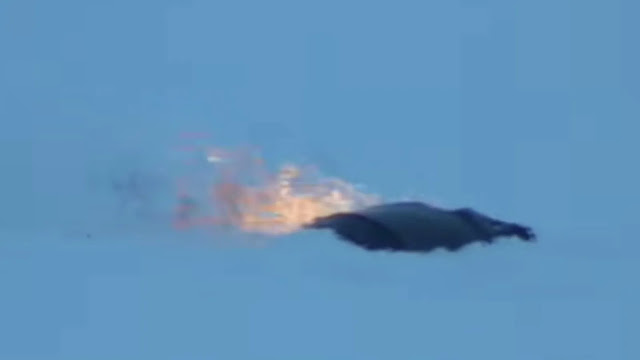 Has a remotely controlled drone had flammable liquid poured onto it and set alight maybe?

It definitely looks like a UFO for sure but these flames do not look right because they're bigger than the actual UFO itself which is absolutely bonkers knowing that there's no material,on the outside of any known craft which is this flammable. If this is a UFO, it's got to be using unknown materials (not necessarily I suppose) but to withstand the aerodynamics of our Earth's atmosphere, the pressures, the wind alone makes it nearly impossible for anything other than a metallic craft to travel at speeds in the atmosphere.

I'm not liking this one UFO sighting at all but if you know me then you'll know that I always say "we can't rule it out unless we have the carcass of the craft or Bona-fide real evidence" which would turn out to be a fake ie a drone, or otherwise. Just in case it is a real reversed engineered craft or a genuine UFO. Time will tell us all we will need to know.

We've got to stay open minded but not naïve. It just means that we have to put this one on the "urgent research" pile. The reason for that is because it serves no purpose been out there in the "deceived category" because it's a trophy to some pratt thinking he or she is funny - but they're not funny at all.

Anyway's, it's supposedly happened over Cornwall but not Cornwall in the UK but rather instead it's the Cornwall in Ontario, Canada on 1st January, 2016. It's a suspicious looking shape for starters, it's truly strange to see because it's not the typical UFO sighting.

The flames absolutely betrays the innocence of this UFO. Someone has either created this for fun, to express their creativeness or it's a student that has enrolled in a digital art, technology, graphic design or something else entirely like gaming, coding and video design.

It's got to be someone involved in this type of design or model making because nobody goes out of their way to deliberately misleading the world with a hoaxed UFO sighting. Who wakes up and decides to start day off by making a model UFO summoning their skills as a creatively inclined person because they feel like adding confusion to Ufology?

Absolutely nobody in the real world!

Not any normal person who I know put it that way! Okay, that's if it's a deliberate faked UFO sighting? It could be from a B movie or a TV show that is filming a scene but has been taken out of context and uploaded to YouTube as a deliberate hoax?

I don't think anyone would come forward and say yes I created it because I'm dishonest and devious. Plus I like to laugh at the people who think it's real.

So maybe it's just been taken out of context with the sound off, just seeing it outside of it's settings and innocently mistaken for a UFO sighting?

Whatever the reason or whatever you want to believe, it doesn't matter because one day this will become apparent and it's true identity realised one way or another.

Here's the extraordinary video which is controversial to say the least:

Please share this post with someone and let's show how people they can try to fool some of us, but they can't fool everyone. Also please share your thoughts and opinions on what you think about this, cheers.