This is unprecedented UFO disclosure because the Ukraine National Observatory is telling us how to film UAPs because we're not going to film normally.

Ukraine has been visited frequently by UFOs and this is a real game changer because it's 2 types of significant information coming with this story.

Keep reading for unprecedented knowledge from the Ukraine National Observatory on how to film UFOs. 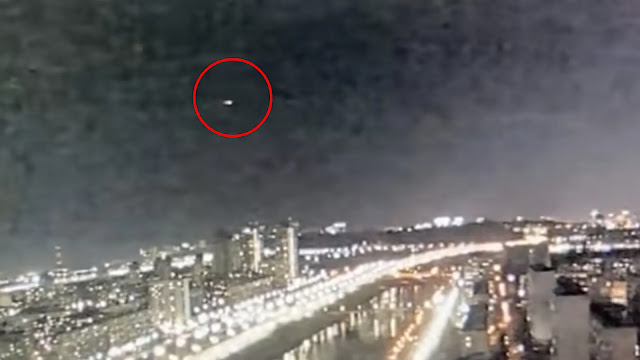 The Ukraine National Observatory is telling us how to film UAPs because we're not able to with normal video and photo equipment. This is disclosure that I've been waiting for. Continue for link.
I only scanned this story for a few minutes to begin with as one does when reading through the many, many different daily UFO sightings of the previous day, the previous night and the hours leading up to when I start reading. The information is literally coming in all the time, it's just how I've got it set up, anyone can have keyword alerts for absolutely anything posted online.

It's a great way to narrow down the research and focus the tip of the research wherever you want it. Google gives us tools to create these keyword alerts.

Anyways, just today in Ukraine a preprint paper published by Kyiv’s Main Astronomical Observatory in coordination with the country’s National Academy of Science states that UFOs are flying over Ukraine.

The paper is titled:

"We see them everywhere, the research said, adding, We observe a significant number of objects whose nature is not clear."

"The eye does not fix phenomena lasting less than one-tenth of a second, the paper said. It takes four-tenths of a second to recognize an event. Ordinary photo and video recordings will also not capture the unidentified aerial phenomenon. To detect UAP, you need to fine-tune shutter speed, frame rate, and dynamic range equipment."

The first bit of information I eluded to - is this, ordinary video and photo recordings will not capture the UAP! That's the first bit of unprecedented "for our eye's only" pieces of information. The second piece is this; To detect UAP, you need to fine-tune shutter speed, frame rate, and dynamic range equipment.

We would not have gained this information from the US Government or NASA! It's taken a Government backed astronomical society of Ukraine to tell us how to detect the UAPs in our atmosphere, so yes this is absolutely unprecedented information because it's official.

We might have an idea of it but this is a published papet in the astronomical society world. Guy's this is unprecedented because it's not everyday we are specifically told where to look, and how to look for UFOs by the government of any country! Think about what this now means?

Personally I think that this is exceptional UFO disclosure.

The US Government has subsequently declassified the UAP video footage but has recently stayed quite bluntly stating "and as another matter of fact" that more military footage of Unidentified Aerial Phenomena encounters does exist, although it doesn't matter because the Department of Defense (DoD) definitely will not be releasing these UAP videos due to "national security concerns." As I heard this I nearly had milk coming out my nose because teamed with this Ukraine UAP disclosure (it's coming from the national observatory in Ukraine) we've got 2 different countries giving us unprecedented and quite frankly a bit scary information that Extraterrestrials are real and this is how you look for them.

I've never known anything like it in all my life. That's a mountain of UFO information coming out of these 2 Seperate Government's that almost seem like it's to good to be true. So I checked and it's definitely real. It also sound's like for them it's an everyday normal speech...

Please, by all means carry on giving us this UFO information.

So, I'll just remind you that here's 2 competent Government's telling us between each other that; 1, UFOs are everywhere over one country and 2, the other one say's yes they have more UFO footage but can't release it because it will harm national security!

This is 2022, UFO disclosure has happened I'm pretty sure that we can handle it... Unless it's literally a bad thing that has happened or is going to happen? And that guy's, is a bloody rapp!

Here's a video of just one recent UFO sighting over Ukraine it was uploaded to YouTube by Greek Music video channel:

So there you have it guy's, I said that this is going to be a good post, and I meant it. I'm pretty sure that if you look you'll find out what settings to have on your camera shutter speed and if you have Google keywords alerts on, you'll be fine tuning your UFO disclosure to as it happens.

You'll find all you need to following this Eurasian Time's link, the paper's a download, but here's an image of the published paper. 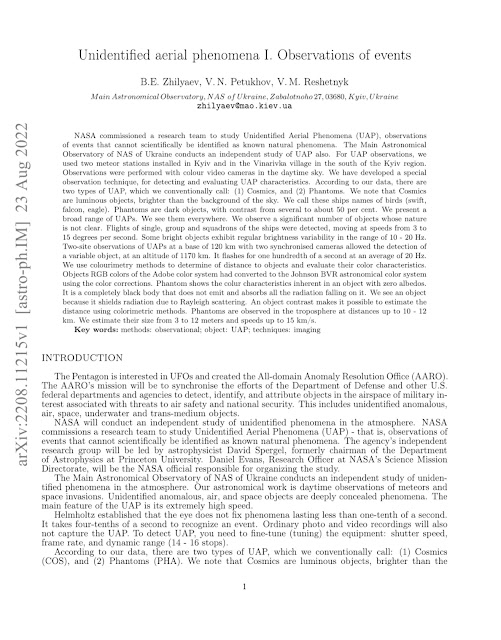 Enjoy. Check the links for relevant information backing all this up.