Fish Looks Positively Alien Or What We Perceive As Alien

Here's the utterly frightening moment when a sea diver came across an Alien looking Wolf Eel fish. It's a truly terrifying moment as it looks Alien.

Okay, seeing a fish that looks like the perceived Alien we know are real, that's about as scary as it can be while diving in the open sea.

Peeping around the corner of it's little cave in the sea which is normally pitch dark instead of a paparazzi like scrum, he's gonna be scared! 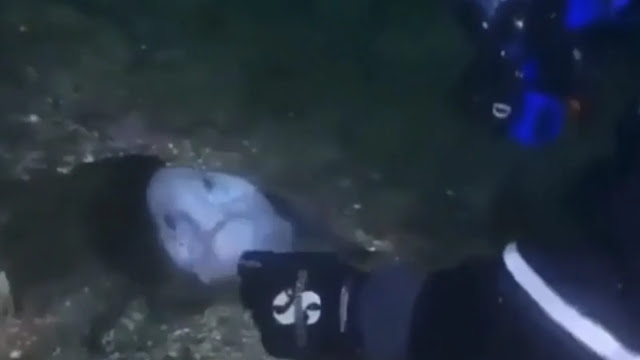 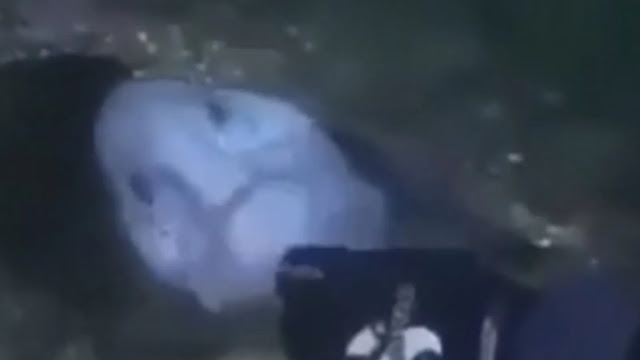 Above is a close up of the Wolf fish Eel that definitely looks "messed up" right, in terms of it's spookiness and just straight up, messed up face!
But I'll be darned (lol darned) that this doesn't look a lot like what we perceive an Alien might look like because it definitely does! Is that the face only a mother could love, you betcha. Does it look like an Alien hiding in an underwater cave, again you betcha? We've gone from asking what it is, to knowing what it is, then back to wondering what the hell it is, lol. Now that's what I call Ufology at it's finest, it's confusing as all hell and mixed up with the wrong crowd.

Seriously, that's the best way to describe Ufology, as being mixed up with the wrong crowd. It should be able to be free, if Aliens exist and want to come and knock on the proverbial door (Earth) and ask to borrow a cup of sugar, then why hide behind the settee?

We should invite them in, let the ET's in and introduce themselves because I don't think we've got anything to worry about, do you? I mean, I could be wrong but unless they look like these Wolf Fish Eels then that's a big fat nah, get behind the settee again!

The fish's identity is:

It's definitely, (most definitely) a Wolf Eel fish. That what we can see peeking out from behind the rock with the empty void behind it. It's got the look of a scared Cat or a Owl that's got huge eye's. But it's definitely a wide eyed Wolf Eel fish and not an Alien. I know because I've looked it up.

Okay, so we now know that it's just a Wolf fish Eel but for that brief second and a half it sure does look very interestingly like an Extraterrestrial. But it's not an Alien thank goodness for that, right because otherwise it's a "hit me with your laser beam" time, lol. Or even fisticuffs underwater with a fish.

It's a darn Wolf fish eel!

It should be renamed as the Alien fish or the ET Manatee. Only because it rhymes. So what's your thoughts on this Wolffish and how would you act if you saw this one "while alone" diving in the sea? Actually, did you think it was an Alien for a second before you found out that it was a Wolf Fish Eel?

I think I already know what your heroic reaction would be, it'd be to stare this Wolffish down, look him right in the eye's and pull an underwater Bruce Lee on it. That's what I'd do.

Share your knowledge regarding Wolffish and why you think it looks so scary to us? Why do we perceive it as a scary looking Alien? I'm talking about it's age, origin, why it's Dinosaur looking and anything else that you want to add like misconceptions about this fish?

I wanted to show you this video because of the Alien like look that this fish showed at the beginning of the encounter. It looks scary but it's actually not a fish according to the rest of the video.

So, what do you think about this? It's a truly wonderful if not strange and a little bit scary but what's the truth about this "fish"...

Please can you share this post and also if you have any thoughts or opinions on this, please share them in the comments section below, cheers.