Selection Of Unbelievable UFO And Straight Up Amazing Videos

I've put together some of the very best UFO sightings footage that I believe are brilliant. Some UFO sightings I was sent and some I picked.

It's not just their own UFO sightings or UFO videos that people are sending me, they're sending me stuff that can't be explained or that other people have posted and would like my opinions on. 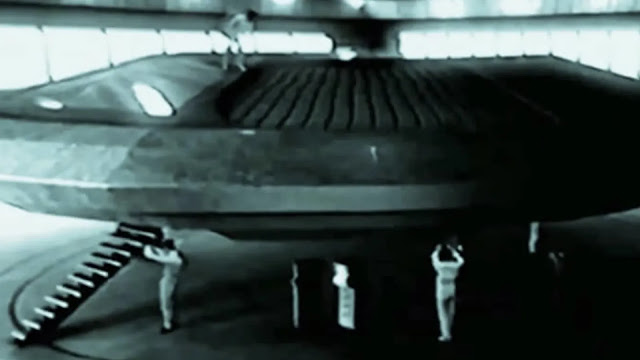 The above image is of men working on a Flying Saucer in the United States in 1959.

And to boot, I've also come across some brilliant UFO videos and in particular this extraordinary video which shows us men working on what can only be described as a Flying Saucer.

It's in an undisclosed location but there's no way that it's a movie prop because it's size is mega big! But in the grand scheme of things, what I believe or think doesn't matter because it's the actual video that speaks at the end of the day.

My writing is neither here nor there to be honest. I wish a lot more videos existed regarding these types of anomalous thing's such as people working on reverse engineering craft's (a bit like this) but if it's truly happened in the world then surely there's evidence of it "somewhere" for training purposes or to document their reversal of the technology for future reference maybe?

If we think critically about this UFO phenomena, then surely the agency's working on this stuff must have records, media must exist that has the UFO front and center, close up and running? I mean, there's no point in reverse engineering a craft if you haven't seen it running because you could be making things worse or engineering a failure?

And the exotic technology that we now know exists, surely the UAP videos wasn't the government's only interaction with the UAP craft's"surely"...

There's no explanation on this really and now that we've had government confirmation that yes more UAP videos do exist but they cannot be released because of national security concerns, that's a mind blowing revelation all to itself. In other words, there's way more to the UAP Tic Tac shaped UFOs than meets the eye!

We've seen them executing G force's like nobody's business and flying faster than military Jet's against the wind. In other words nothing that would upset or blow the public's minds. So what else is on the other UAP videos? And that's the million dollar question. I want answers to most of, if not all of the UFO sightings that happen.

Ufology is in a far better place in 2022 than it's ever been. Can you believe it that we're on the other side of disclosure? I remember seeing a UFO vid and thinking it's bloody good, but we'll never know what it actually is for sure?

Start by doing what's necessary; then do what's possible; and suddenly you are doing the impossible.

Or when a UFO sighting was on mainstream media platforms and they'd be slinging mud at it looking all confused with flies above their heads. It's not their faults, they just didn't want to believe that life could be elsewhere in the universe because if they did try to comprehend it, their tiny minds would stop working.

I don't relish saying "we told you so, I just enjoy it" which is totally different to relishing it. Relishing it, is saying "I told you so but with a cap on sideways." Whereas I prefer to wear it fully correct.

Oh yeah, we told you so!

Anyways, you've got to check out these epic "hand picked, hand fried and toasted just the way you like em" UFO sightings and other fantastic UFO disclosure vids. Some of these vids go way back to a time when tuppence was a thing (buy thing's with it) and Roswell was a futuristic shenanigan yet to happen!

I'm getting into quick quotes. These are definitely interesting and they're related (somehow) to our everyday lives. Like the Mahatma Gandhi quote just above. This is definitely about the Ufology struggle! It explains the beginning and the middle and it most certainly explains the ending where "you win" because UFOs are now accepted as a real fact.