Greater London UK saw a fantastic UFO sighting of a group of 5 UFO Orbs. These are purple in colour and filmed by an eye witness. Is it a real UFO.

This one's for the memory book because this UFO video set's the bar high in terms of uniqueness.

This UFO sighting was witnessed over London on May the 26th in 2021. 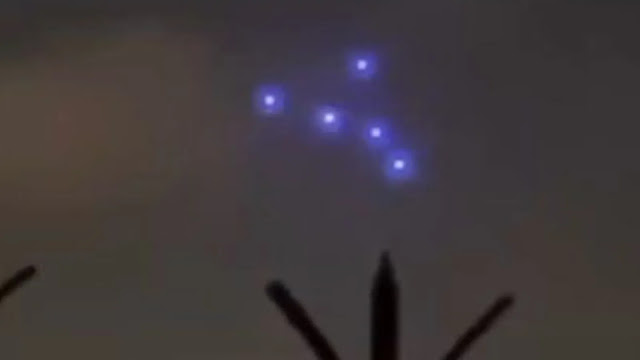 It's a great sighting that happened over London and was filmed at night time. I've been racking my brain thinking about this.

Thinking have I seen this before in a UFO video or have I seen it online posted before by anyone? I genuinely cannot think of a point in time where I've seen it. I've definitely seen similar UFO sightings before but It's not like this one.

I could really only come up with this UFO sighting possibly been a real UFO sighting? But I'll be keeping an open mind as this could be a group of drones? But that's only because of the colours, a deep purple colour surely means it's drones, right? There's no evidence of a hoax, but there's evidence that it's a real group of UFOs as that's this video itself. This video backs up an eye witness statement that they sawa UFO sighting!

People have used video evidence before and it's accepted worldwide in other matters, so why not this?

But I could be wrong? Other than a group of drones or remotely controlled helicopters circling etc with LED Light's attached to them? I am thinking that it's a real and good contender for this UFO formation been genuine?

What's your take on it?

Is there evidence of real Alien's?

Are Alien's on Earth?

But the biggest question bar none is where do Aliens come from? Some say Alien's are already here on Earth because they have always been here, just hidden away from prying eyes.

Then there's the inner Earth conspiracy theories that say's Extraterrestrial life already exists inside the inner Earth, like literally inside of the Earth with a few different locations around the world that has entrances?

Antarctica is one obvious entrance.

Cheyenne Mountain is connected by a tunnel.

And Lhasa, the capital of Tibet, was connected by a tunnel with the inner earth, Shamballa. The entrance of this tunnel was guarded by lamas who were sworn to secrecy...

All these UFOs which if they're not seen by NASA or any other agencies that are actively monitoring Earth's atmosphere then where did they come from?

The Hollow Earth is a concept proposing that the planet Earth is entirely hollow or contains a substantial interior space. Notably suggested by Edmond Halley in the late 17th century, the notion was disproven, first tentatively by Pierre Bouguer in 1740, then definitively by Charles Hutton in his Schiehallion experiment around 1774.

It's a truly unique theory that's stood the test of time and it ain't going away, not any time soon put it that way. The 17th century saw this theory of the hollow Earth gain a lot of popularity amongst (no other than) the scientific minds "of the time" and since then it's stuck. It's the very people who are now against it!

Now, add in the modern world from the 1920s onwards and we've got a solid bona-fide real "not going away" conspiracy theory. That Extraterrestrials are habiting inside the Earth. That the US Government has a pact and Admiral Byrd encountered Aliens in Antarctica.

Is Area 51 really secret because we all know about it. Cheyenne Mountain complex is supposedly connected by a tunnel.

There's a lot of information on where these UFOs are coming from. Inner Earth is just one explanation put forward. Then there's portals!

If you've got any thoughts or opinions, suggestions about this UFO sighting or any other sightings, then if you can leave them in the comments section below, I'd appreciate it.