Here's a fantastic UFO encounter with the eye witness taking photos of Halloween decorations and didn't realize it. UFOs are real now since 2017.

Here's a very different post with no video just a few photo's but they speak for themselves without any videos.

San Diego, California on October 2, 2022 was actually a Sunday and the day it happened the eye witness caught multiple UFOs and didn't even know it.

It wasn't until a colleague of the UFO witness was checking out the photo's of the Halloween decorations that these really bizarre looking UFOs was noticed.

So what is sometimes a life changing event wasn't even acknowledged in this instance - but that's Ufology for you. One day there's no UFOs and the next, without knowing it, there's 4 hovering over your house! And they wasn't even noticed until day's later!

Can you imagine how many photos that people take on a daily basis, now think about how many people will actually check out the photo's "if ever" in fact they might never even get looked at? But luckily for us, Halloween to the rescue for this UFO sighting.

That reminds me of the old VHS tapes and shoulder mounted monster camcorders on holiday, lol. Filming the hols was a massive undertaking but nobody ever sat down when they got back at home and watched them. Nobody ever watched them.

Way to important to record over but way to pointless to ever watch... That's got to be a spot on analysis of the camcorders? And I know I'm average Joe, (no shame in admitting we're all similar) so if it's how it went for me, you can pretty much guarantee that it was just the same for a lot of people, lol.

It's always a good thing to see more than 2 UFOs in any UFO sighting video/photo because that means that there's a lot less of a chance of it been a hoax, right? Here's what I mean; with each new UFO added to every event or sighting the real chances of it been faked gets less and less. There's a few reasons for that. For starter's there's more CGI work involved. Secondly there's more drones needed and thirdly it's overall a lot more work for the hoaxers. So it stands to reason that it's a good thing to see more than one UFO in any UFO encounter or UFO event.

I did count 5 UFOs but I'm going to stick with 4 UFOs because the fifth UFO is really hard to see. I'm just assuming that the witness did report this to MUFON because of the case ID number but UFO Stalker pretty much mirror images all the UFOs that are reported to the MUFON website ie case ID, basic overview and the description etc. Speaking of such...

We took some photos of our halloween decorations and when we were showing it to a colleague, he noticed an anomalous illuminated object in the background. we honestly do not know what it is.

The incident occurred about 10 miles east of the coast and you could see the rounded shape of the object. since we didn't notice the object until the day after we took the photo, we didn't capture any video of its trajectory. the grayish/greenish item appeared in two photos taken about 10-15 seconds apart. i didn't notice some people in the area had also reported seeing something less than a week before. any ideas?

There's what looks like 5 UFOs but officially it's got to be 4 UFOs. 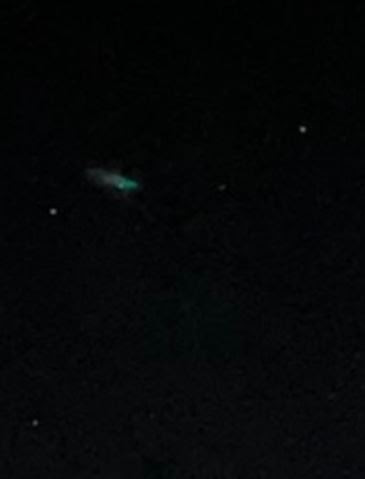 These are quite hard to see but they're definitely there.

If you have any thoughts on this or opinions on this please leave your thought's in the comments section below, cheers. Also please could you share this post, thanks.