What looks like tourist's to me was opposite the World Trade Center in New York and the cameraman actually point's to this UFO which is in the clouds.

It's a truly strange sight, imagine that you are with your friends and a possible UFO look's like it's hiding in the clouds?

Is it a real UFO sighting over New York city in the US? It definitely looks like that doesn't it. 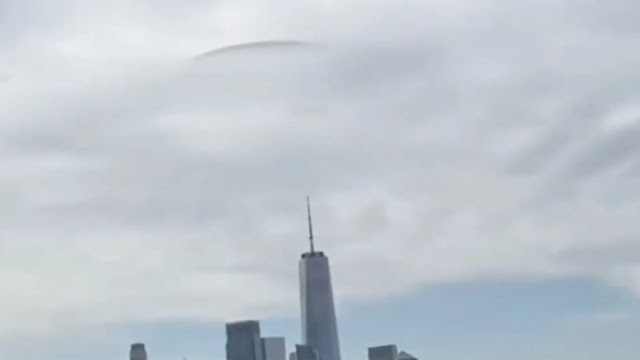 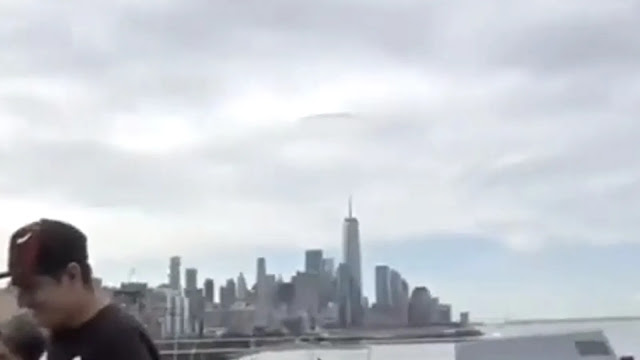 But what if it's a genuine phenomena or a dark part of the cloud?

There's a lot of unknowns and maybes but maybe I'm losing sight of the facts?

It is a strange event I'll give you that and it's way to big to be a drone or a plane flying by New York. So let's look at everyone's reactions, it's possible that we might get the answer we're looking for (which is yes or no) just by watching their reactions?

Okay, I already know that the people in the video don't even know it's there but the person who is filming this "alleged UFO" point's it out like literally with his finger, so I'd go as far as to say that him or her pointing to the alleged UFO outweighs the other people not being aware of the suspicious looking anomaly in the clouds above what looks to me is The World Trade Center?

I've just checked Google Maps and it's 100 percent above the World Trade Center! There's no date, but the video definitely looks genuine to me. I think that I'm going with it been a real UFO sighting over New York city and it's definitely a fantastic UFO sighting.

I'll admit that while it looks improbable just because of it's pure size, I can't find anything else that would say it's a fake! The guy's pointing ☝🏻 at it, he's not claiming it was there after the fact which usually comes with a copy or an edited version of the original video, he's actually pointing to the UFO as if to say "look it's a UFO" and it's above the World Trade Center!

It's really hard to dismiss it outright, without being there actually on the day that this was filmed or a video specialist to check the video for after edits, but he's still pointing to it... So that kinda rules out getting the video checked for editing.

Seriously if you've got any thoughts or opinions on this UFO sighting, or if you can add anything useful to it please share it with us in the comments section below, cheers. Also please share this post, thanks.