UFO Sighting Over Field In Europe Filmed From Witnesses Car

There's a belter of a UFO sighting over Europe and the guy is filming this UFO from his car. The witness wind's his window up and it filters the UFO.

This really is a stunning video of a UFO filmed over a European field and it's been filmed from a car to boot which becomes a huge part in this story, read on.

There's a car parked at the side of the road in any European country (it doesn't matter which country) and this guy's filming this strange UFO event but the guy's got his window down. 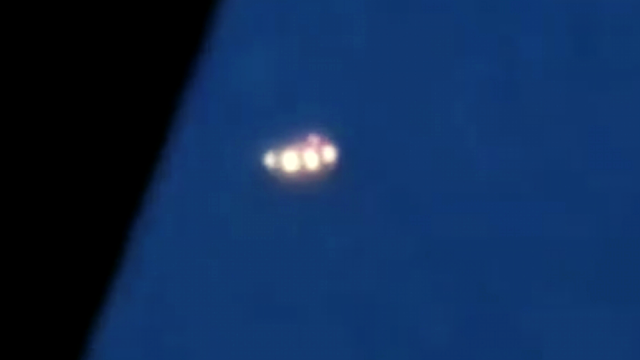 This is a world first for me, a UFO sighting being filtered through a car window.

He's filming away just as I'd be doing, as anyone else would be who saw it because it's UFO!

The UFO has light's on it which makes it seem like just one strip light around the circumference of the UFO. The guy who we can hear talking then wind's his window up! And that's when the tinted glass comes into it's own. We can now see this UFO perfectly because it's now been filtered. I must Dmit I've never known a car to be used as a filter for a UFO sighting lol.

But now we have!

It's probably a world's first that a UFO sighting was put through a filter called "car" because it's got the window tinted. And because it's tinted we actually see the UFO in all it's glory, for what it's worth so-to-speak is which is a truly strange craft but magnificent all the same.

There's 4 light's on the central line going around the outside or it's circumference of the craft. It could be a drone but I'm really, really finding it hard to believe that... It could also be a UFO just as equally as a drone if not more so because of the overall look of it.

It's filmed over a field which means that anyone can be hidden in the tree's or hidden away from eye's so that the operator can't be seen and with a hand held remote control?

They (humans) could be flying this thing?

On the downside of Ufology:

It's a truly horrible time in Ufology because at the same time the rise of UFOs/UAPs overlaps with the blooming rise of drones what a coincidence!

What a horrible timing.

Why couldn't drones just wait a decade or so? Because if UFOs are real then drones are neither here nor there. In fact it's a shame that drones actually even took off (no pun intended) because what benefits have they "really" brought mankind except for aerial views of mount Fuji! Or a drone delivery service that won't work!

They're just so blooming annoying because people are using them to hoax Alien craft's, spy on people and they're being utilised for horrendous wartime acts of barbarism on both sides in Europe. And there's no real application for drones that benefits mankind, seriously you tell me what good has drones ever done for anyone, ever?

I'm not a fan of the drone operator neither because their use is planned by people, specific people! I don't like drones because it's always been used to fake UFO sightings. They're expensive wastes of money and totally irresponsible. We should have a drone amnesty where we allow people to hand in drones but then still slap them with a massive fine! Just welcome them in, cuppa coffe, biscuit blam! 3K fine for being a UFO hoaxer!

And that's why I'm not a political figure.

I know that it won't be a popular choice lol or taken seriously but I'm totally up for banning drones unless you can prove you are not going to fake a UFO sighting?

It's only a conversation, just a mindless view I have that's all. Drones will never be banned and I'm sure that they do benefit mankind somehow, somewhere, probably? I can't think of one.

Ufology suffers from them day in and day out. I don't think it'll be a popular choice to get rid of all drones but with fingers in our ears we can get anything done!

Okay I think it's quite clear that most UFO sightings have turned out to be drones and that's why I'm asking for them to be confiscated, messed up and thrown in the river!

This UFO sighting (I hope it's not a drone) it's got potential to be a real UFO sighting? It looks really good, genuine and as if it really happened. I've narrowed it down to Europe because of the road sign (speed sign), at first I thought it was a UK sign post about the speed limit but if you look, the m/h is not lined up in the middle almost as if there's a K in front of the m/h missing, meaning it's km/h kilometres per hour? And that's not what the UK councils put on Britain's sign posts as the UK uses mph or miles per hour. It's mainly the European mainland which has the same looking speed sign posts as this one in the video.

Just winding the car window up has actually inadvertently filtered this UFO sighting because of it's tinted windows! How fortunate are we that this guy's car windows are tinted in just the right kind of perfect tint that acts as a genuine image filter.

Epic first for me!

And because of this we can see the whole UFO a lot better, a lot more clearly and the light's are now perfectly visible to us all. The UFO becomes much clearer instead of the light blocking out it's shape through light blurriness which is definitely what the light's on the UFO was doing.

If you can translate what this guy is saying, can you please share it with us in the comments section below, thank you.

Here's the extraordinary video which was filmed over Europe in 2022:

There's literally no information with this UFO sighting, it was uploaded to Instagram by Ovnisvideos.

Thank you so much for translating what the person is saying in the video, I absolutely appreciate it (8th November 2022) via comment left today.

In portuguese, the guys says:

Man… what is this thing over there in sky? Tell me.

What is this in the sky man?

Are you guys seeing what I’m seeing?

Look… check it out.