Video From The ISS Shows Satellite Communication From The Future

In 2020 there was a large commotion in space caught on the ISS live feed cameras. Satellite laser communication systems was being tested. Futuristic.

Lol, I've got a great story here that really demonstrates that we should absolutely let the expert's opinion in before we go jumping off at the mouth.

A UFO laser battle in space, is how one large UFO channel on YouTube called it hahaha. 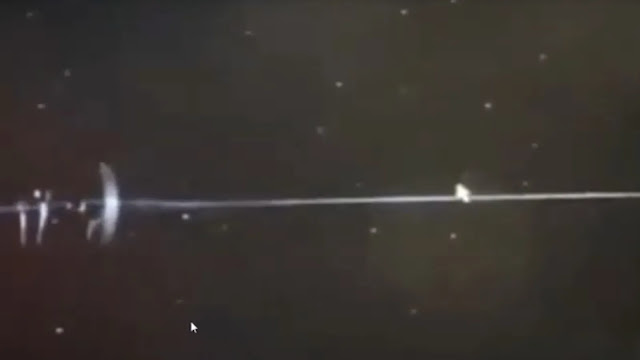 Above is the actual screenshot of the satellites firing lasers in space and caught on the ISS live feed cameras.

I know that it's not professional to actually write "hahaha" but in this case, I'm gonna be the judge and I'll allow it in as evidence, lol. But I'm not going to mention which large UFO channel thought it was a UFO laser battle in space, I'll let you work it out. Hint; 3 Moon's.

Anyways enough laughing at the opposite side because this video is in all intents and purposes "serious and epic" and to be honest with you, that's putting it mildly. It gives us a tiny glimpse into the world of cutting edge satellite systems, top military thinking, communication systems and quite possibly the future and what's at the forefront of many industries and that's right across the board!

It's showing us laser communication systems of the future because there'll come a time when our "Voyagers" name given to deep space stations (that's where it's going) and initial first communion systems will need a good way of sending messages with video, pdf, apps, pretty much everything the internet can send.

From satellite to satellite it's taking on the role of satellite to craft, craft to satellite. That's what we're seeing here. And by the ISS live feed cameras no less. No wonder the unnamed YouTube channel mistook this impressive display of Star Trek like Alien ship battles lol.

Anyways, this guy got really, really peeved off big time, you can hear it in his voice, he's one step away from blowing a gasket! So he did what any sane citizen did. He made a video of the darned event and explained it. Excellent video, excellent use of his frustration and brilliant information for the many, many thousands of people who was given duff information in the first place.

I totally agree with World News Report Today YouTube channel for clearing up the "clear confusion" and bringing us all up to speed. In fact this is a perfect example of what to do if you see false information, wrong information, slightly misleading information or just plain back to front information, make a video and explain the situation with a view to setting the record straight.

It's a good use of your time believe me because now in 2022 we now have UFO disclosure and the last thing we need is a panic because there's "UFOs in space duking it out" with laser's no less!

17th 2020 a Department of Defense test was captured on the ISS live feed and one of the largest channels is reporting it as a space battle. What a joke! They said it is their best footage of the year. To report this with no investigation is total click bait. The Space Development Agency says optical inter-satellite links are "one of the most critical technologies to be demonstrated."

WASHINGTON - Optical communications terminals that use lasers to beam data across space will be tested in upcoming experiments by the Space Development Agency and the Defense Advanced Research Projects Agency. These terminals are important pieces of DoD’s future low Earth orbit constellations which will require satellite-to-satellite optical crosslinks so data collected in space can be immediately sent to military command centers on the ground.

Laser communications systems have much faster data transmission rates than radio-based systems but DoD has concerns such as the effects of space radiation on optical terminals and whether the electronics can withstand the stress of space launch.

“Optical inter-satellite links are one of the most critical technologies required to be demonstrated for Tranche 0,” the Space Development Agency said in a request for proposals issued last month for its communications constellation known at the transport layer. Tranche 0 is the initial deployment planned for 2022.

The satellites in the transport layer have to pass data in space and down to the ground to military users with very low latency.

That can’t happen “without the demonstration and maturation of optical inter-satellite crosslinks - with radio frequency (RF) crosslinks as a backup,” the SDA request says. One of the concerns in using lasers for downlinks is penetrating the Earth’s atmosphere, especially through clouds.

SDA wants to build one or more constellations of hundreds of satellites for communications and for missile tracking. It plans to buy optical terminals from multiple vendors so it’s asking bidders to ensure their hardware is interoperable with those of other vendors. Several companies make advanced optical terminals for NASA’s deep-space communications and follow common standards.

But there is no accepted industry standard for optical inter-satellite links in lower orbits below geosynchronous range, according to SDA. In its request for proposals, SDA included a recommended standard to make links interoperable but it will still need suppliers to collaborate to make sure their systems are compatible.

One of the companies now working with SDA on optical links is General Atomics Electromagnetic Systems. GA-EMS announced on June 5 that it signed an agreement with the agency to conduct a series of experiments for optical inter-satellite links using the company’s laser communication terminals.

“These experiments will demonstrate robust communication capabilities through multiple mediums, from Earth, to and between satellites in multiple orbits, and on in to deep space,” Scott Forney, president of GA-EMS, said in a statement.

For the experiment scheduled to launch in March 2021, the company will develop two 12U cubesats, each hosting an infrared payload and a laser communications terminal. Another closely watched demonstration is DARPA’s Blackjack program.

The agency next year plans to launch a pair of small satellites that will carry optical inter-satellite links made by SA Photonics. At the completion of the Blackjack program in 2022, DARPA’s goal is to demonstrate that an optically meshed network in LEO can provide global secure communications to the U.S. military.

DoD has a very different requirements than NASA’s deep-space programs that seek to establish communications with the moon and beyond. “NASA has proved the technology. But their terminals are not affordable for LEO programs.”

A key advantage of laser links is that they are extremely secure, said Strobel. “They’re virtually impossible to intercept.” CACI is building a laser transmitter for NASA’s Deep Space Optical Communications project to bring back data from an asteroid to Earth.

Laser-based communications are “starting to get a lot of traction,” he told SpaceNews. There are still some issues that need to be solved, he said. “We have to work through the risks with optical components such as how they perform in radiation.”

Now, yes definitely without a doubt that the YouTube channel in question most certainly got it wrong. It makes for views I suppose but nothing else. I'm always looking to grow as information becomes available I'm looking to improve my knowledge, skills ideas and theories. I'll be the first one to admit that I sometimes don't want to change my mind on things because I'm happy in my comfort zone.

My comfort zone being knowledge that I understand and that I can communicate well to others. So learning something new takes responsibility for ourselves and if we truly want to grow, we've got to admit some home truth's to ourselves first.

The rest, well it just comes naturally after you've given yourself that talking to about being stubborn! It works if you let it.