Aliens Killed Man But Brought Him Back To Life In UFO

Travis Walton Fire In The Sky UFO abduction case. What really happened because the stories changed and people are saying different things now.

This is the most famous UFO "incident" in the United States and it spawned a genre of Alien horror all on it's own!

But unfortunately the story has changed by the actual central character himself, Mr Travis Walton after talking to researcher JP Robinson. 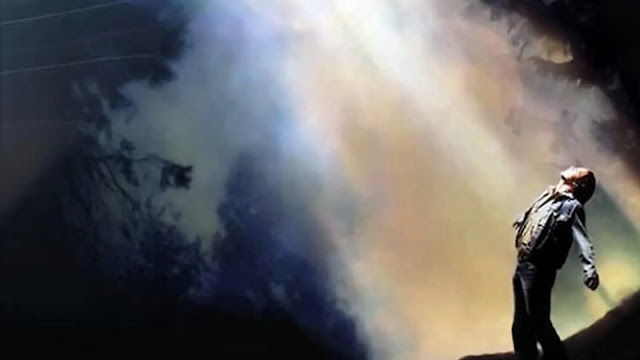 Credit: Fire In The Sky Paramount Pictures/Canva.
Apparently the Alien's now killed him by accident and they took him inside the UFO to bring him back to life. But, as far as I know the Alien's tortured him and well, did unspeakable things to him...
That's not exactly in keeping with what the film said, what he says and then there's the book. Was he an advisor on the film? and was the film solely or in part based on the truth?
And just how much "directors discretion" or creative licence did he use on the film because it's true that the film was based on his book also titled Fire In The Sky.
According to the Express, here's the link to this post it's the most convincing UFO Alien abduction case in history. But the website occupyory dot org (which no longer exists) claims he's made it all up.
Credit: Open Minds Production.
In the early days the National Enquirer ran the story in 1975 but did you know that there was apparently history in his immediate family members of UFO and Alien abduction claims and he failed a polygraph test which the National Enquirer did with his consent?
You should read the Metabunk story regarding the driver of the pickup truck on that very night called Mike Rogers the crew boss! Here's a quick snippet of the interview:

Mike Rogers was the crew boss was driving the truck that night. In this brief informal interview he says Travis discussed with him creating a UFO hoax, and that "it was all deliberate, it was all a staged thing."

We must afford the same belief's to the crew boss because it's equal when we come to believing what happened that night! Travis gets no preference treatment and neither does Mike Rogers! So who's telling the truth? But I've also found this about Mike Roger's:

Mike Rogers, a member of the group, would later describe it as a "luminous object, shaped like a flattened disc."

And here's another which also claims that Travis said one of the Alien's in blue overalls and a glass helmet knocked him out after he escaped and ran through the craft. I thought they were helping him? Read that here.
Which is the full Travis Walton UFO abduction truth:
So, just what the hell is going on with this whole thing? What's real, what's fake, what's misconstrued, what's whispers, half truths and exaggerated?
In fact, can I even make sense of this because there's 3 major part's to this story.
There's number 1. The actual,  "actual" incident.
There's number 2. The Hollywood film Fire In The Sky story which to some will be the complete story. There's number 3. We've now got another completely different interpretation by the actual central character Travis Walton.
This is the link to Travis Walton Wikipedia page I'll add a quick run down of the "jist" of it:

Quote:
The Travis Walton UFO incident was an alleged alien abduction of American forestry worker Travis Walton by a UFO on November 5, 1975, while he was working in the Apache-Sitgreaves National Forests near Snowflake, Arizona. Walton was missing for five days and six hours.

So, I'm afraid it's been controlled disastrously, the narrative has changed at least 3 times that I've come across and the last thing anyone needs when they're trying to convince an already skeptical public is for the main story to change. And to boot, it's blooming changed 3 times! 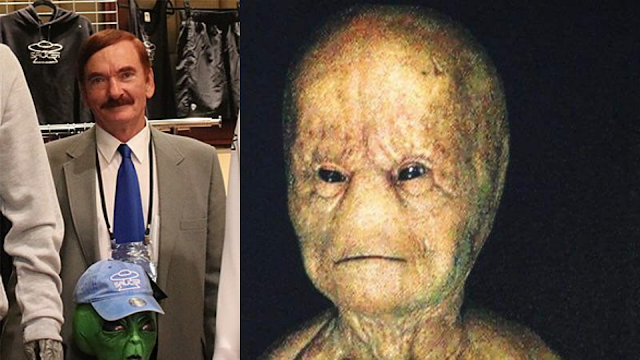 Credit: Express/Travis Walton/Fire In The Sky Graphics/Wikipedia/UFO Sightings Footage/UFO News/Canva/Fire In The Sky Wikipedia Film Page.
It's one of those conspiracies that can't be verified, it can't be proved one way or another or it can't be confirmed at least by traditional measures yet it's cemented into the psychology of people as real. Or at least as real of a horror story that can be.
Nobody seems to realise that the whole story has changed and it seems like we've had a major piece of large wool pulled over the collective eye's of the public. He's now telling people that he was killed and brought back to life, check out this story with source links. 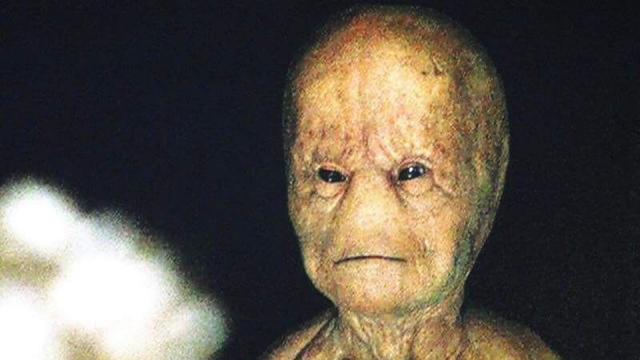 This is the horrific Extraterrestrial representation from the Hollywood film "Fire In The Sky" which by the way was filmed in 1993 which had some absolutely amazing graphics and unbelievably terrifying scenes. If it's a true representation of what Travis Walton actually experienced while in this frightening UFO then omg no human should have undergone such trauma. Was Travis Walton an advisor to the Fire In The Sky movie? Because if he was then that's another avenue of worry for the credibility of this whole story.
He should set the story straight by doing a full story reading of his book in his own words, how it was intended for it come across and he should elaborate while reading the book where needed! That's exactly how all the mystery surrounding this major UFO experience would be put to rest or validated. Either way it's definitely changed and the story has now irreversible changes because Travis himself has changed the whole perception of it. He says he was killed by a laser blast, I kid you not!
Check out this link. 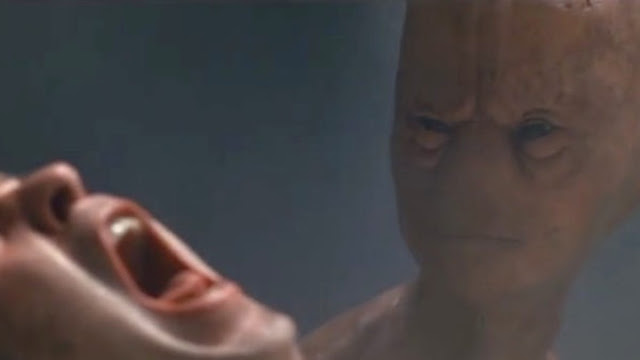 Credit: Express/Travis Walton/Fire In The Sky Graphics/Wikipedia/UFO Sightings Footage/UFO News/Canva/Fire In The Sky Wikipedia Movie Page.
Travis Walton now states that he died and the Alien's brought him onto their craft (I suppose the word spaceship would be a correct description) and brought him back to life because they killed him by accident - which is straight from the horse's mouth so-to-speak. Anyone knows that a story doesn't change overnight, it's a calculated response to a question of which he must of been asking himselfanyway's, all it took was someone to ask him. But, anyway's the story has now fundamentally changed and that's that. There's no going back now, it can't be unsaid. Hopefully we will one day make sense of it all because there's nothing like time, time will make sense of everything and time reveals all, just like it will hopefully do so here.
Maybe he thought everyone would be gullible enough and stupid enough to go along with this fundamental story change I'mnot sure? I have to ask these awkward questions and make these awkward assumptions because I'd do the same to anyone else who changed a story 3 bloody times! There's a part of me that's angry or very sad anyways that we're put in this position because lot's of people backed this story. Lot's of people totally 100 percent believed it so where do these people stand now? It shows complacency and that he's confident enough to try and pull this new chapter to the story, off. Unless he's only done it to renew interest in this story, we might never know why this new information has been added.

Express quote:
The twist in the story has been revealed by UFO researcher JP Robinson, after a meeting with Mr Walton at an alien
conference.

And to boot, it seems it's following the same modus operandi of a lie, I'm sorry but after years of not changing his story, it's now changed. It's very disheartening to know that if an initial solid story changes then it's more likely than not, it's revealed to be a lie. A made up fantasy to get a book deal or maybe even to have a movie made... oh yeah, both of those thing's happened! Monetary gains in real life is the ancient carrot in front of the Donkey. But instead of a carrot it's money dangling in front.
Do you think the movie would have been made if the director or the producer knew the story had changed or will eventually be changed? That's a big "no".

In fact it's probably a candidate for time reveals all or the doubters in the beginning will now be saying "I told you so".

But, it's definitely interesting nonetheless and if I'm being honest it's worth looking into because even the most controversial stories just might have some truth to them. I think that this particular UFO story has been with us that long that people want to believe it.
I kid you not, this story change has been dubbed a "twist in the story" lol. That absolutely beggar's belief! It's a loophole, it's an expert's opinion on how to get away with changing an original story fundamentally. I'm dumbfounded with it, it's a new twist in the story. There's someone out there reading the new twist who thinks, now that's a clever way to change a story completely and pull the wool over people's eyes. A twist is added to the unchanged story, a twist is a new plot direction. What happened here is the whole event changed. He has now been killed, now he's been brought back to life. What happened to the horrific experience he endured?

Quote as told to researcher JP Robinson by Travis Walton via Alien Conference in 2017:
A MAN was accidentally killed by a laser blast from a UFO… before his corpse was taken aboard and he was miraculously brought to life, it has astonishingly been claimed. 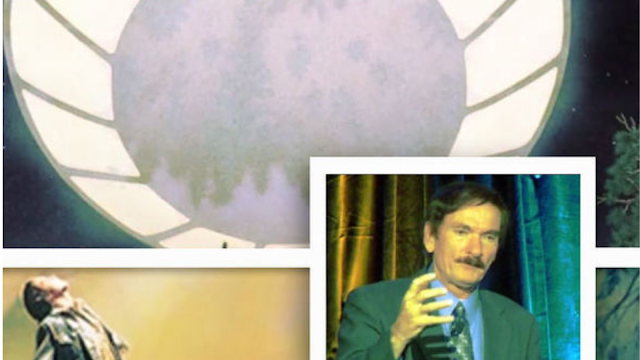 Credit: YouTube.
Travis Walton claims he was killed by a UFO laser then 3 aliens inside of the unclean saved his life. 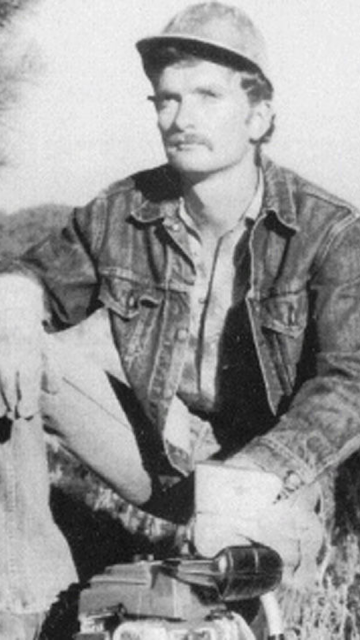 Credit: Travis Walton.
Travis Walton in 1975 around the time of the bizarre incident.
Credit: Express/Travis Walton/Fire In The Sky Graphics/Wikipedia/UFO Sightings Footage/UFO News/Canva/Fire In The Sky Wikipedia Film Page.
We've gone from an Alien abduction to the Alien's accidentally killing him and bringing him back to life probably because they was sorry for accidentally ending his life while they were trying to take off? Okay, that's about as strange as it gets.
So, if his first story was based on the Alien's actions, these cannot be changed right. If his feelings have changed then that's suspicious because he said he was terrified throughout. They kept him for 5 days a prisoner. Now all of a sudden his whole thought process has changed about the event. That's even more suspicious than a Nigerian Prince giving you shares in an oil company "my dear". That's how the letters start, always with my dear, lol.
I'm sure there's people out there that believe the Travis Walton story but you need to know that his statement has now changed.

Express quote:
"It now seems that as the craft was preparing to take off into the night sky it inadvertently knocked Travis for six, killing him in the process.
"Yes, you read that right. Travis told me that he believed that he was actually dead.
"So now we get to the real question which so many people ask...why did they take him on board? Well, according to the man himself, they took him in order to save his life - and this they clearly succeeded in doing."

A lot of people will be saying "I knew it, I knew it wasmadr up" and the rest on Travis Walton side are going to be saying "why has the story completely changed" because there's absolutely no way anyone can mistake an Alien abduction for an entity helping you.