Here's what can only be described as 3 UFOs above the Moon and filmed from the Earth. This is probably one of the best UFO sightings that there is.

Here's one absolutely mind blowing UFO sighting that is showing us a triple UFO sighting but in a Moon zoom from the Earth using a fina camera.

Isn't it just one of the most satisfying zooms that you can ever see? 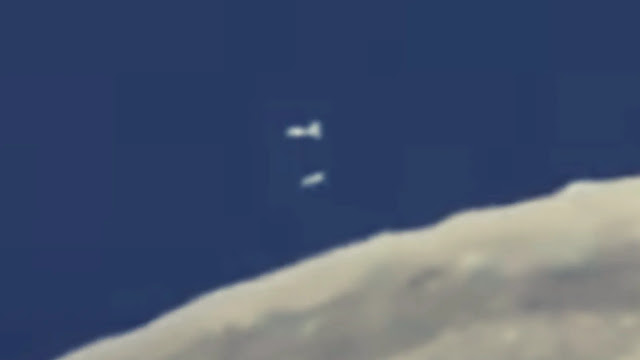 The day that this sort of camera zoom was invented, it was a fantastic game changer for everyone.

Being able to see what's going on near the Moon using an Earth based camera is anyone's dream come true. Have you ever tried to zoom into the Moon using your high-end smartphone?

You absolutely should try it because the effort that has been put into these smartphone cameras is mind blowing. A lot of phone makers actually lead with the camera features when they advertise it.

Zooming in to the Moon we see what looks like one UFO until the zoom get's closer and closer then it becomes clear that there's three white UFOs. Their shapes look like craft's in the typical sense and through this camera they look almost cigar shape?

They're definitely not Orb shape.

One of the three UFOs peels off from the other's and starts to fly downward towards the surface of the Moon. Just as it looks like it's going to be in front of the Lunar surface it actually goes behind the Moon! That means these UFOs are humongous and massive in size!

These three UFOs must be larger than a football field if not larger?

If you use a freely available online adapter for a telescope (to secure a smartphone to the telescope eyepiece) then it's just gone into the realms of "next level capabilities." I don't know if the person who is filming this triple Lunar UFO sighting is using a telescope adapter for his or her telescope but the zoom in to the Moon in this video is epic!

We can see the cloud's in the screen as a shimmering white mist.

Looking at the Moon in a close up like this one - which is been filmed from Earth is a relatively new thing. Using just a simple button press and we open up a whole new world is pretty wild. Sensors on these cameras are so sensitive that catching UFOs in their natural habitats ie in space has become easier than ever.

And it's open to whomever want's to experience this fantastic new world experience. Because once you have actually seen the Moon through the eyepiece of a telescope but using a smartphone with the extra zoom, OMG you will want to film through it all the time.

These craft's must be huge what with the zoom been able to cover that much distance but still don't forget it's space and it's very far away! So been able to see the UFOs like we can, that means these are massive!

Their shapes are undetermined because it's the scale of the distance between the Earth and the Moon which is throwing up the biggest challenge when determining the sizes.